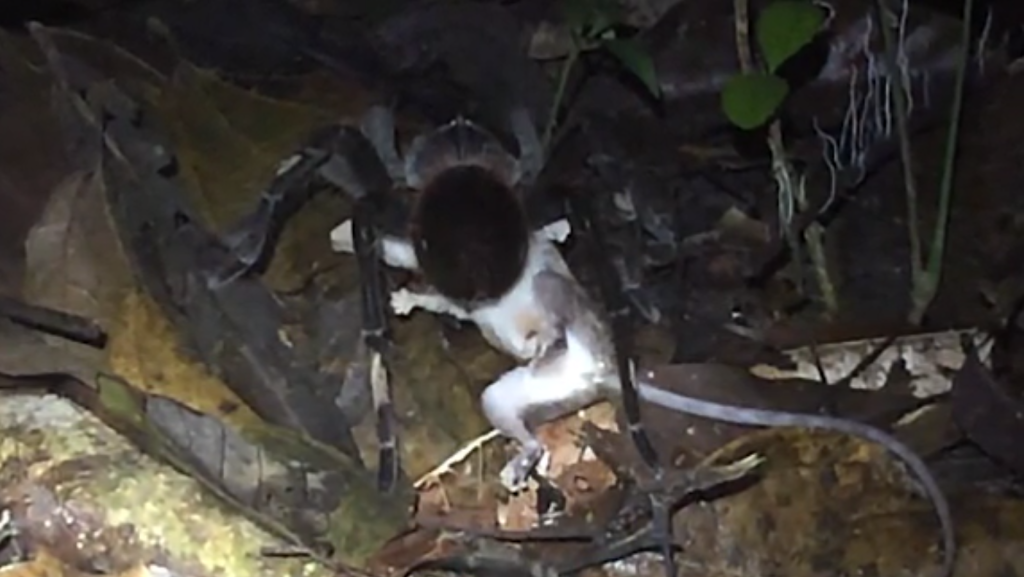 (WSVN) - If you needed something new to grace your nightmares, university biologists have captured chilling video showing a giant spider eating a opossum.

Biologists from the University of Michigan released photos showing large spiders in the Amazon rain forest preying on a number of other creatures, including frogs, lizards, snakes and even a small opossum.

Researchers recently published their findings in a paper in the journal Amphibian & Reptile Conservation.

“This is an underappreciated source of mortality among vertebrates,” said University of Michigan evolutionary biologist Daniel Rabosky. “A surprising amount of death of small vertebrates in the Amazon is likely due to arthropods such as big spiders and centipedes.”

Researchers said they captured the horrifying sight while in the lowland Amazon rain forest near the Andes foothills, one of the most diverse ecosystems on the planet.

While walking through the forest at night, doctoral candidate Michael Grundler and two other students “heard some scrabbling in the leaf litter.”

“We looked over and we saw a large tarantula on top of an opossum,” said Grundler, a co-author of the paper. “The opossum had already been grasped by the tarantula and was still struggling weakly at that point, but after about 30 seconds it stopped kicking.”

Researchers said the tarantula (genus Pamphobeteus) was the size of a dinner plate, while the young mouse opossum was about the size of a softball. Grundler’s sister Maggie captured the video on camera.

An opossum expert at the American Museum of Natural History later confirmed that this was the first documented instance of a “large mygalomorph spider preying on an opossum.”

The researchers also observed spiders eating frogs and lizards, and a centipede eating a dead coral snake that it had decapitated.