Unemployment benefits ended, but hiring did not surge in September 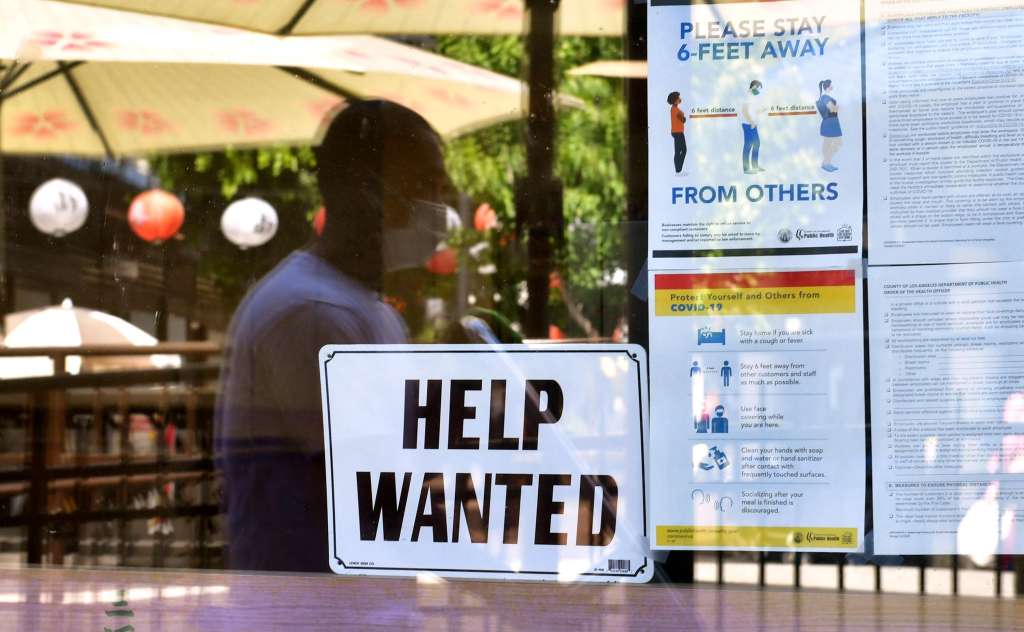 A 'Help Wanted' sign is posted beside Coronavirus safety guidelines in front of a restaurant in Los Angeles, California on May 28, 2021. - Following over a year of restrictions due to the coronavirus pandemic, many jobs at restaurants, retail stores and bars remain unfilled, despite California's high unemployment rate, causing some owners to fear they will not be able to fully reopen by the June 15th date California has given for a full reopening of the economy. (Photo by Frederic J. BROWN / AFP) (Photo by FREDERIC J. BROWN/AFP via Getty Images)

(CNN) — Out-of-work Americans did not rush back into the job market after beefed-up unemployment benefits ended nationwide in September.

The labor force shrank last month for the first time since May, signaling that more people were opting to sit on the sidelines and not actively look for work, according to the federal jobs report released Friday.

“If unemployment benefits were the driving force behind labor market dynamics, then you would not have seen that effect,” said Gordon Gray, director of fiscal policy at the American Action Forum, a right-leaning think tank.

The jobs report, which disappointed on several fronts, came at a time when the nation was contending with both elevated levels of coronavirus cases and a return to school for millions of children.

Despite a record number of openings, employers added an anemic 194,000 jobs — far fewer than expected for the second month in a row.

While experts caution against drawing conclusions from one or two months of data, the September jobs report provides yet more evidence that pandemic unemployment benefits did not greatly contribute to the country’s labor shortage. Other factors — including child care issues, virus fears and workers’ reevaluation of their life goals — are playing a major role in prompting people to remain at home, economists said.

The latest report undercuts the argument made by many Republicans and business owners that the nation’s economic recovery was being slowed by a federal safety net they deemed too generous.

Governors in 26 states — all but one Republican — opted to terminate at least one of the three pandemic unemployment programs in June or July, saying it would help solve staffing shortfalls. (Courts in two states later required officials to continue the benefits through early September.)

However, after they did so, employment did not grow substantially faster in those states, previous studies and government data have found.

Congress’ unprecedented expansion of the nation’s unemployment system ended in early September, nearly 18 months after lawmakers came to the rescue of millions of Americans who lost their jobs at the start of the pandemic.

A key component of the relief effort was a federal weekly supplement for those out of work. Initially, the jobless received a weekly $600 boost from April through July of 2020. Congress then revived the enhancement in late December but reduced it to $300 a week.

Lawmakers also created two other measures to aid the jobless when the coronavirus struck. The Pandemic Unemployment Assistance program provided payments for freelancers, the self-employed, independent contractors and certain people affected by the outbreak, while the Pandemic Emergency Unemployment Compensation program extended payments for those who exhausted their regular state benefits.

The expiration of the programs last month left more than 8 million people with no unemployment compensation at all, while another 2.7 million lost the $300 federal weekly boost but continued receiving state payments, according to estimates by The Century Foundation.

They joined the roughly 2.7 million Americans who were cut off from some or all of their benefits in the states that opted to terminate at least one of the programs early.

Many business owners have struggled for months to hire more workers, pointing to the generous compensation as a main cause.

“A lot of people wanted those benefits cut because they believed it would make it easier to hire at lower wages. But the top line data is not telling us that’s what happened,” Aaron Sojourner, a labor economist with the University of Minnesota, said of the September jobs report.

Other companies are providing signing bonuses, benefits, iPhones and other incentives, as well as offering higher pay. But the mismatch between job openings and available workers continues.

The benefits’ expiration may indeed lead more people to accept jobs, but it will take time, experts said.

Although there were a record 10.9 million job openings in July, the economic recovery had softened a bit in recent months as the latest surge in Covid-19 cases prompted consumers to pull back. Case counts, hospitalizations and deaths are finally receding again.

Also, some parents continue to struggle with child care issues and some workers fear taking positions where they have to deal with the public.

Nearly 5 million people said they were not working because they were caring for children not in school or day care, and 3.2 million said they are concerned about getting or spreading the virus, according to the Census Household Pulse Survey taken in the second half of September.

Others just need time to find the right job.

“Of course, people want to go to work and they have been going back to work,” said Andrew Stettner, senior fellow at The Century Foundation. “But it’s not something that happens quickly.”

While Congress is not expected to revive the pandemic programs, lawmakers could funnel more funds targeted at helping laid-off workers return to the labor market through training, internships, employment support and other measures, he said.