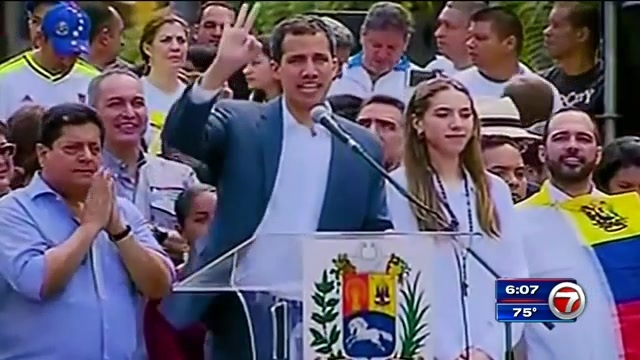 LONDON (AP) — The U.K. Supreme Court ruled Monday that Venezuelan opposition leader Juan Guaido should be recognized as the nation’s interim president in a case that will ultimately determine who controls almost $2 billion of gold held by the Bank of England.

A five-judge panel unanimously agreed that British courts must honor the U.K. government’s 2019 decision to recognize Guaido as interim president. The question is central to the case because Guaido and President Nicolas Maduro have named separate boards to oversee Venezuela’s central bank and both have laid claim to the gold.

But the case isn’t over. The Supreme Court sent it back to a lower court to decide whether the Guaido board has any legal standing after Venezuela’s Supreme Tribunal of Justice declared Guaido’s appointments unconstitutional.

Guaido said he welcomed the ruling and looked forward to demonstrating why the U.K. courts shouldn’t recognize the decisions of the Supreme Tribunal.

“When we so demonstrate, the . board appointed by President Guaido will assume control of the reserves and protect them from the depredations of the usurper Maduro regime,” he said in a statement.

Guaido, then leader of Venezuela’s National Assembly, challenged Maduro’s claim to the presidency, arguing that his 2018 election was rigged and invalid. Guaido says he’s the country’s interim president under provisions of the constitution that allow the head of the legislature to take power until free elections can be held.

While a number of countries, including the U.S. and U.K., have recognized Guaido’s claim, he has never been able to assert his authority and Maduro remains in charge.
Attorneys for the Maduro Board said it remains the only “validly appointed authority” to oversee the central bank’s foreign assets and that ignoring the rulings of the Venezuelan courts would “fly in the face of the rule of law.”

They criticized the Guaido camp for drawing out the litigation for 19 months, leaving the central bank’s assets frozen and unavailable for use for helping people in Venezuela suffering through the COVID-19 pandemic.

“Mr. Guaido`s recognition flies in the face of the reality on the ground,” said Sarosh Zaiwalla, a senior partner at Zaiwalla & Co., representing the Maduro board. “His appointees have no ability to act on behalf of the (bank) in any effective way, or to represent it in any international legal proceedings.”