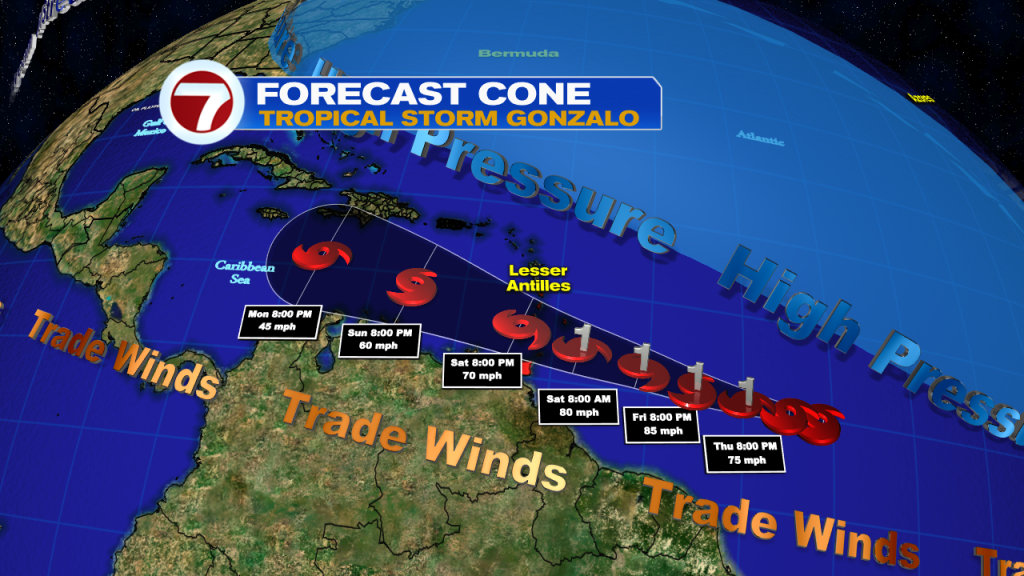 (CNN) — The most active part of the hurricane season is still weeks away, but experts’ predictions for a busy season appear to be holding true, with the National Hurricane Center now monitoring two systems.

Tropical Storm Gonzalo, which formed Wednesday, is expected to become the first hurricane of the season on Thursday. Meantime, a tropical depression has formed in the Gulf of Mexico and is expected to strengthen into a tropical storm by Friday, the National Hurricane Center said.

A hurricane watch has been issued for Barbados, as Gonzalo is expected to strengthen into a hurricane over Thursday and peak at a Category 1, CNN meteorologist Robert Shackelford said. A watch is typically issued 48 hours before tropical storm force winds are anticipated to reach the location, according to the National Hurricane Center.

At 11 a.m. Thursday, Gonzalo had sustained winds of 65 mph and was about 585 miles east of the Southern Windward Islands.

11AM ADVISORY: #Gonzalo faces an uncertain future. It will likely weaken in the Caribbean, but for now expected to affect Windward Islands on Saturday as a potential hurricane. @wsvn @7weather #stormstation pic.twitter.com/trUS5xHyVO

Tropical Depression Eight formed in the Gulf of Mexico Wednesday night and was about 425 miles off the coast of Port O’Connor, Texas, Thursday morning, according to the National Hurricane Center.

With winds of 30 mph, the system is expected to strengthen to a tropical storm by Friday, the hurricane center said.

If it does, the storm will be named Tropical storm Hanna, breaking the record for the earliest H-named storm set by Tropical Storm Harvey on August 3, 2005.

A Tropical Storm Watch is now in effect from Port Mansfield to High Island, Texas.

11AM ADVISORY: #TD8 is getting better organized over the Central Gulf of Mexico. Heavy rains likely over portions of Texas by this weekend. @wsvn @7weather #stormstation pic.twitter.com/t3DooUgAoN

Tropical storm Gonzalo marks the earliest that a storm has received a name starting with the letter “G” since the United States began using a named-storm system in 1953. On average, the seventh named storm in a season is on September 16.

The previous record for the earliest seventh named storm formation in the Atlantic was Gert on July 24 during the busiest hurricane season on record, 2005.