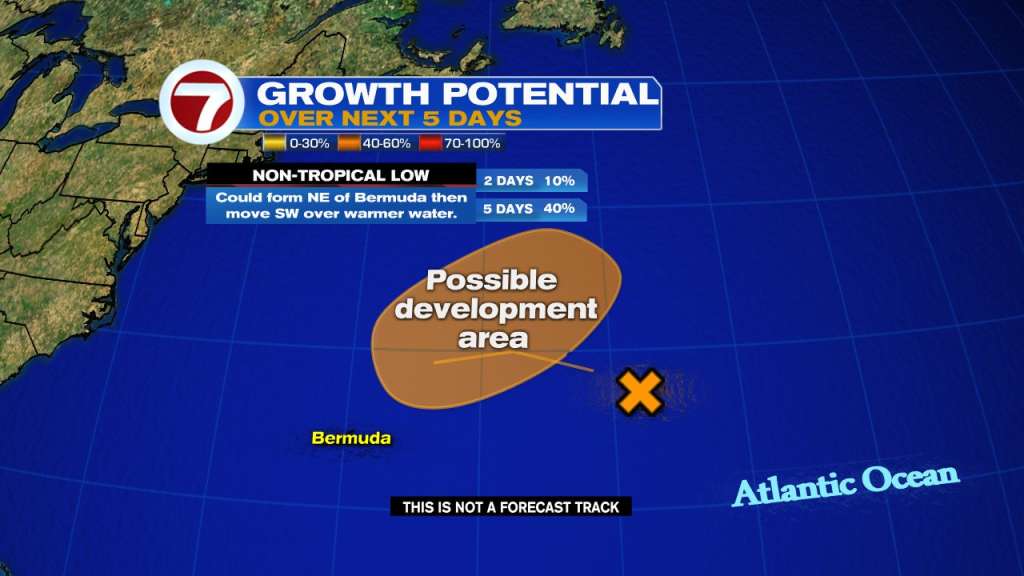 (CNN) — Hurricane season could begin before its official start for a seventh year in a row in the Atlantic Ocean, as the National Hurricane Center monitors a developing weather system that could become this season’s first named storm.

Wednesday morning, the center noted a region in the North Atlantic Ocean, northeast of Bermuda, as an area to watch for subtropical development. The weather system has a 40% or “medium” chance of formation within the next five days. If it becomes a tropical or subtropical storm, it will be named Ana.

A non-tropical low pressure system is forecast to develop NE of Bermuda by Thursday before moving W/SW over warmer Atlantic waters. It will have a small window to develop over the weekend before moving N/NE by Monday. Moderate chance of development through the next 5 days. @wsvn pic.twitter.com/p2QIGI0tTR

Regardless of whether this system becomes a tropical or subtropical cyclone, there will not be significant impacts to land. Passing showers and gusty winds will be possible late in the week and into the weekend for Bermuda.

This chance of development signals that hurricane season is just around the corner and the time to watch the Atlantic Ocean for tropical systems is beginning.

The Atlantic hurricane season begins on June 1 and is six months long, lasting through November 30. In the past five years, however, tropical cyclones have formed before June 1.

The last time the name Ana was used was in 2015 — also before the start of hurricane season. Ana became a tropical storm in early May 2015, and made landfall near Mrytle Beach, South Carolina.

“Named storms have formed prior to the official start of the hurricane season in about half of the past 10-15 years, including each of the past six years,” said Dennis Feltgen, communications and public affairs officer at the NHC.

“Many of the May systems are short-lived, hybrid (subtropical) systems that are now being identified because of better monitoring and policy changes that now name subtropical storms,” Feltgen added.

This has prompted the National Hurricane Center to start issuing its Tropical Weather Outlooks on May 15 instead of June 1.

Tropical Weather Outlooks are issued four times a day, highlighting any areas to watch for potential development of a tropical storm or depression.

“These outlooks provide a notice alert that NHC is monitoring one or more disturbances that have the potential (low, medium high) for tropical cyclone development during the next 48 hours and five days,” Feltgen told CNN.

The first named storm typically doesn’t form in the Atlantic until July 9, according to the NHC. It’s not until mid-August when the first hurricane usually forms. August, September and October are the most active months for tropical storm and hurricane activity.