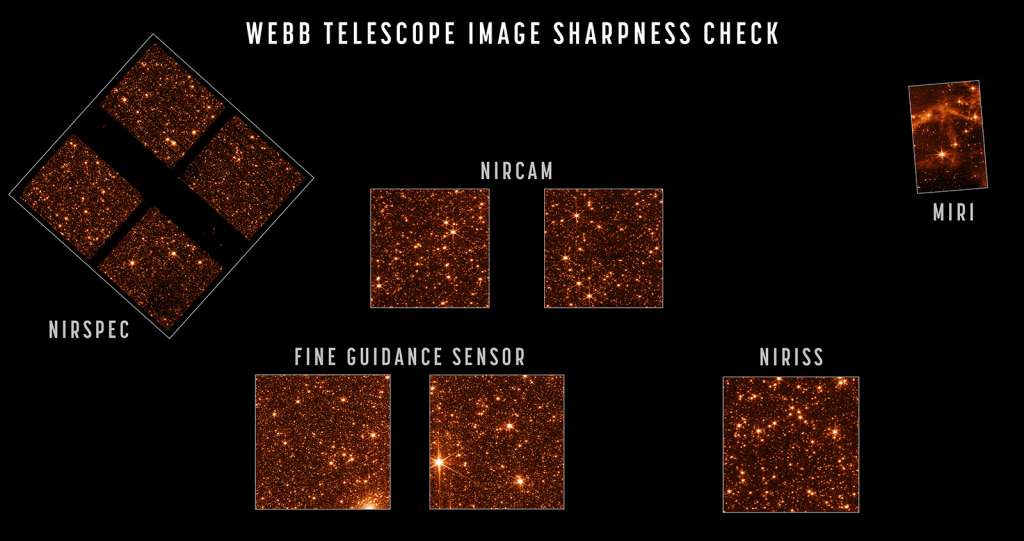 Engineering images of sharply focused stars in the field of view of each instrument demonstrate that the telescope is fully aligned and in focus. For this test, Webb pointed at part of the Large Magellanic Cloud, a small satellite galaxy of the Milky Way, providing a dense field of hundreds of thousands of stars across all the observatory’s sensors. The sizes and positions of the images shown here depict the relative arrangement of each of Webb’s instruments in the telescope’s focal plane, each pointing at a slightly offset part of the sky relative to one another. Webb’s three imaging instruments are NIRCam (images shown here at a wavelength of 2 microns), NIRISS (image shown here at 1.5 microns), and MIRI (shown at 7.7 microns, a longer wavelength revealing emission from interstellar clouds as well as starlight). NIRSpec is a spectrograph rather than imager but can take images, such as the 1.1 micron image shown here, for calibrations and target acquisition. The dark regions visible in parts of the NIRSpec data are due to structures of its microshutter array, which has several hundred thousand controllable shutters that can be opened or shut to select which light is sent into the spectrograph. Lastly, Webb’s Fine Guidance Sensor tracks guide stars to point the observatory accurately and precisely; its two sensors are not generally used for scientific imaging but can take calibration images such as those shown here. This image data is used not just to assess image sharpness but also to precisely measure and calibrate subtle image distortions and alignments between sensors as part of Webb’s overall instrument calibration process.

(CNN) — The James Webb Space Telescope is ready to observe the universe.

The space observatory’s massive mirror, capable of peering into the most distant reaches of space, is now completely aligned, according to the NASA’s Webb team.

Hailed as the world’s premier space observatory, Webb has successfully completed a number of steps within the past few months that were crucial for aligning its 18 gold mirror segments.

The mirror is so large that it had to be folded to fit inside the rocket for its December 25 launch. After reaching an orbit a million miles from Earth in January, Webb began the careful process of unfolding and aligning its mirror.

Webb will be able to peer inside the atmospheres of exoplanets and observe some of the first galaxies created after the universe began by observing them through infrared light, which is invisible to the human eye.

The first high-resolution images Webb collects of the cosmos aren’t expected until the end of June since the observatory’s instruments still need to be calibrated. But test results released by NASA on Thursday show the clear, well-focused images that the observatory’s four instruments are capable of capturing. Together, these images share the telescope’s full field of view. Webb’s mirrors are directing focused light from space into each instrument and those instruments are capturing images.

For the test, Webb observed a small neighboring satellite galaxy called the Large Magellanic Cloud. The galaxy’s dense field of hundreds of thousands of stars can be seen in the test images.

“These remarkable test images from a successfully aligned telescope demonstrate what people across countries and continents can achieve when there is a bold scientific vision to explore the universe,” said Lee Feinberg, Webb optical telescope element manager at NASA’s Goddard Space Flight Center.

The telescope team expects that the observatory may even exceed the goals it was meant to achieve because it’s already performing better than expected.

“These images have profoundly changed the way I see the universe,” said Scott Acton, Webb wavefront sensing and controls scientist at Ball Aerospace, in a statement. “We are surrounded by a symphony of creation; there are galaxies everywhere! It is my hope that everyone in the world can see them.”

A previous image shared in March also showed that Webb can use the individual segments of its mirror as one giant 21-foot, 4-inch (6.5-meter) mirror and capture the light from a single star.

For the next couple months, the team will ensure all of the science instruments are calibrated.

Each instrument has a number of specialized detectors with custom equipment to help achieve Webb’s science objectives, and all of the instruments have to be configured before they can be declared ready.

And this summer, we’ll see Webb’s first glimpses that could unlock the mysteries of the universe.