The bags look like well-known chips or candies, but what’s inside could harm children 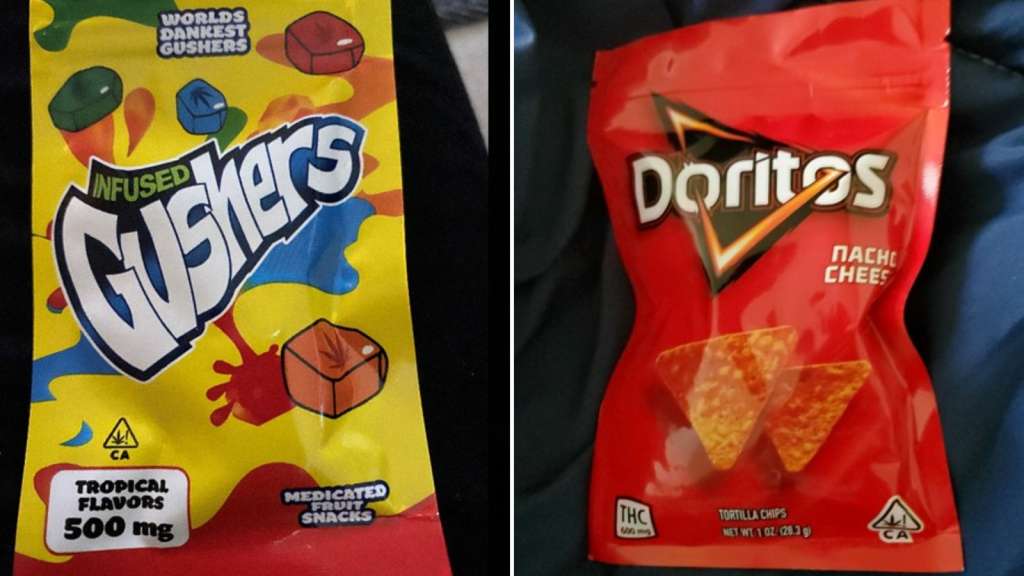 (CNN) — At first glance, it looks like a single serving bag of Nerds Rope that your child might eat as a treat. But take a closer look. See the word “medicated” and the small white box at the bottom that says 600 milligrams of THC?

Those three letters stand for tetrahydrocannabinol, the part of the marijuana plant that makes people high.

Eating even a small fraction of that bag would “overwhelm a child,” said Danielle Ompad, associate professor of epidemiology at NYU School of Global Public Health and senior author of a new study investigating copycat packaging in cannabis sales. The study was published Tuesday in the journal Drug and Alcohol Dependence.

Another candy package Ompad examined was nearly identical to the popular candy Gushers. The label says the bag contains 500 milligrams of THC, while a look-alike bag of Doritos contained 600 milligrams. The resemblance to the brand-name products is uncanny, she said.

“The Nerd Rope knockoffs I have personally seen looked just like the licensed product,” Ompad said. “The (knockoff) Doritos were shaped just like the real thing and had a crunch as well.”

Eating 500 to 600 milligrams of THC would be a huge dose, even for an adult. “If I ate that whole package, I would be miserable. People who are using edibles recreationally aren’t typically eating more than 10 milligrams,” Ompad said.

A thorough examination finds no manufacturer listed on the copycat packaging, she said. However, empty bags mimicking dozens of major brands of snacks and candy can be purchased online in bulk, she said, making it easy for small businesses to join the marketplace.

“The reputable business people in cannabis do not engage in this kind of conduct,” said Henry Wykowski, legal council for the National Cannabis Industry Association. “There are other people that are still operating in the illicit market and they aren’t following the rules.”

“We would like to assist in stopping this. It’s not good for anybody,” he added.

“Many cannabis edibles companies are overstepping on marketing in an egregious way, putting consumers at risk and infringing on the trademarks of well-known and trusted confectionery brands,” said Christopher Gindlesperger, the senior vice president of public affairs and communications for the National Confectioners Association, in an email.

The association has established a set of guidelines for states considering deregulation of cannabis.

“We’re focused on making sure that the appropriate guidelines and policies are set for distinguishing cannabis-containing edibles from traditional confectionery,” Gindlesperger added.

Manufacturers of various major candy and chip brands such as Mars Wrigley, Hershey Company, Mondelez Canada and Ferrara Candy Company have undertaken legal actions against a few companies that are selling knockoffs.

“We are deeply disturbed to see our trademarked brands being used illegally to sell THC-infused products, and even more so to hear of children ingesting these products and becoming ill,” said a Mars spokesperson in an email.

“We encourage consumers to reach out to their local authorities with any tips on these illegal products,” the spokesperson said.

While anyone might mistake a copycat candy or chip with the real thing, young children are especially vulnerable, Ompad said, as they may be easily drawn to the brightly colored bags often decorated with familiar cartoon characters.

If a child ingests edibles they can become “very sick. They may have problems walking or sitting up or may have a hard time breathing,” according to the US Centers for Disease Control and Prevention.

A study published in the journal Pediatrics examined calls to regional poison control centers from 2017 to 2019 and found there were 4,172 cannabis exposure cases in the US among children up to 9 years old. Nearly half (46%) of those calls involved cannabis edibles.

More than 70% of calls to US poison control centers related to marijuana edibles in 2020 “involved children under the age of 5,” according to New York Attorney General Letitia James, who issued a consumer alert in October 2021.

“In the first half of 2021 alone, the American Association of Poison Control Centers has reported that poison control hotlines have received an estimated 2,622 calls for services related to young children ingesting illegal cannabis products,” the alert said.

News reports from around the US put those numbers into stark relief.

A 3-year-old was admitted to a New Jersey ICU in December 2020 after eating “cannabis candy which looked identical to a Nerds Rope,” according to Rutgers New Jersey Medical School. A month later, a preteen was hospitalized in New Jersey after eating a large amount of marijuana-laced candy packaged “almost identically” to Sour Skittles.

Two children under 5 were hospitalized in Oklahoma in March 2021 after eating edibles from bags that looked just like Ruffles, Doritos and Fritos, according to Mark Woodward, public information officer for the Oklahoma Bureau of Narcotics. And the same month a Florida sheriff’s office posted a warning on Facebook with an image of dozens of knockoff edibles.

New Jersey has approved the legalization of recreational marijuana, which will soon go into effect, but Oklahoma and Florida have not.

If a younger child is exposed at home, it could mean adults were careless about leaving edibles lying around, Wykowski said.

“I could sell you a responsibly packaged product that doesn’t look anything like candy,” he said. “But if you leave it out and it looks like a brownie, and your kid walks by and thinks, ‘Oh, I’m a little hungry. Dad left the brownies out,’ and then eats it, whose fault is that?”

It’s also possible teenagers could be obtaining edibles by faking identification or asking older friends to purchase them, just as they do with alcohol, Ompad said.

Until the Wild West of cannabis marketing is tamed through regulation, the responsibility falls on parents to protect their children, experts say. Keep all marijuana products out of the reach of children in childproof containers, the CDC recommends. Better yet, lock them up, Ompad said.

“I am not a person who thinks that cannabis should be illegal or that edibles should not be available,” she said. “We just need to do a better job of keeping them away from children and making it clear that they’re edibles and what the adult dose is to get the effect that you want.”