Texas under hurricane watch ahead of Tropical Storm Nicholas 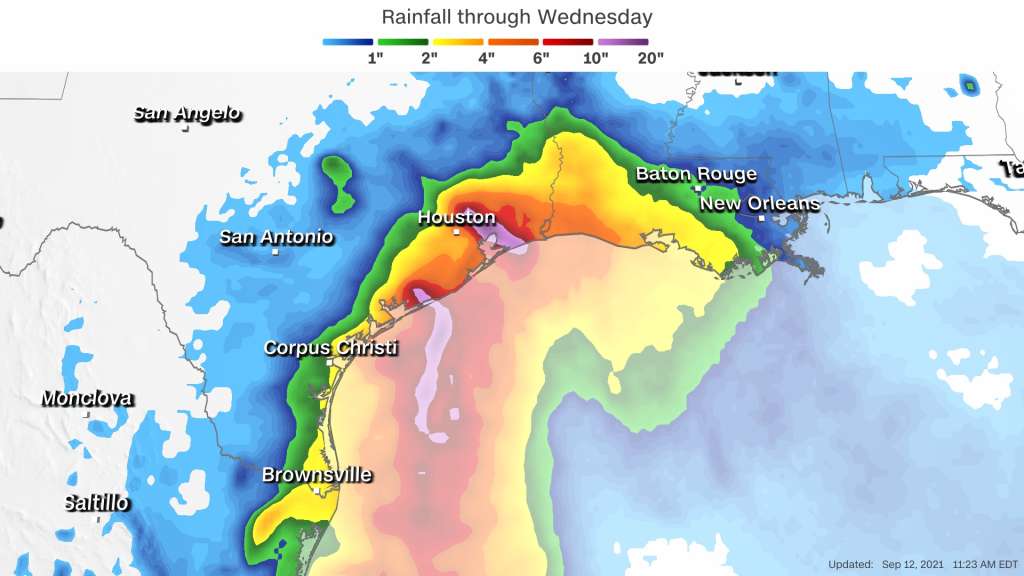 (CNN) — Parts of the Texas coast are under a hurricane watch as Tropical Storm Nicholas is forecast to gain in strength, the National Hurricane Center said.

The storm is forecast to gain peak sustained winds of 65 mph Monday into Monday night, with the center of the storm located over the Gulf of Mexico and just east of southern Texas.

The watch extends from Port Aransas to Sargent, according to the NHC.

“Although not explicitly shown in the intensity forecast, Nicholas could approach hurricane strength when it nears the northwest Gulf Coast, especially if it moves to the right of the NHC forecast track and spends more time over water,” the National Hurricane Center said.

A hurricane watch means hurricane conditions (sustained winds of at least 74 mph) are possible within 48 hours of the watch being issued.

A 14th named storm in the Atlantic basin, the total number of storms in an average season, typically doesn’t form until November 18.

The storm had a high chance of forming over the past 24 hours and when NOAA’s Hurricane Hunters flew into the storm Sunday morning, readings showed the disturbance reached tropical storm status.

A tropical storm warning is in effect from the mouth of the Rio Grande to Port Aransas in Texas, with winds of at least 39 mph expected within 36 hours.

“With the exact track of Nicholas still uncertain, we still have a possibility of further strengthening if this storm stays offshore further northward,” said CNN meteorologist Tom Sater. “Nicholas will be entering some of the warmest waters of the Gulf.”

The center of the storm should move through or near Texas, on Monday evening for southern Texas and Tuesday for upper portions of the coast.

Heavy rain will be the main threat, with a widespread 5 to 10 inches expected for coastal Texas, with localized areas of up to 15 inches.

The Weather Prediction Center on said Sunday the risk for excessive rainfall was raised to a Level 3 of 4 for coastal sections of Texas from Monday through at least Tuesday night.

“This brings 48 hour totals for some areas to 9 to 12 inches, which could lead to significant flooding concerns, especially for urban areas like the Houston metro,” the Center said.

It’s still uncertain where the heaviest of the rain will fall and how much, but some locations will get at least 15 inches by the end of the week.

A flash flood watch is currently in effect for at least eight million people from the US-Mexico border in Texas through southwestern Louisiana, including Houston, Corpus Christi and Brownsville, Texas, and and Lake Charles, Louisiana.

The remainder of southern Louisiana, including New Orleans, will also be at risk for periods of heavy rain, but the threat of flash flooding is not as significant.

A flash flood watch is in effect for the coastal region of Texas, including Houston and Corpus Christi, and southwestern Louisiana, which includes Lake Charles.

“Even with an earlier landfall in southern Texas, this storm has the potential for widespread flash flooding. Houston can easily have problems with 4 to 5 inches of rain,” says Sater. “More than that will create bigger problems.”

Storm surge will also be a risk, with 2 to 4 feet forecast from the US-Mexico border through High Island, Texas.

The area from Port Aransas to San Luis Pass could see a surge of up to 5 feet, which is where the storm surge warning is in place.

Gusty showers and thunderstorms were moving onshore to pars of the Texas and Louisiana coasts Sunday afternoon.

Storms will remain in the forecast through much of this week.