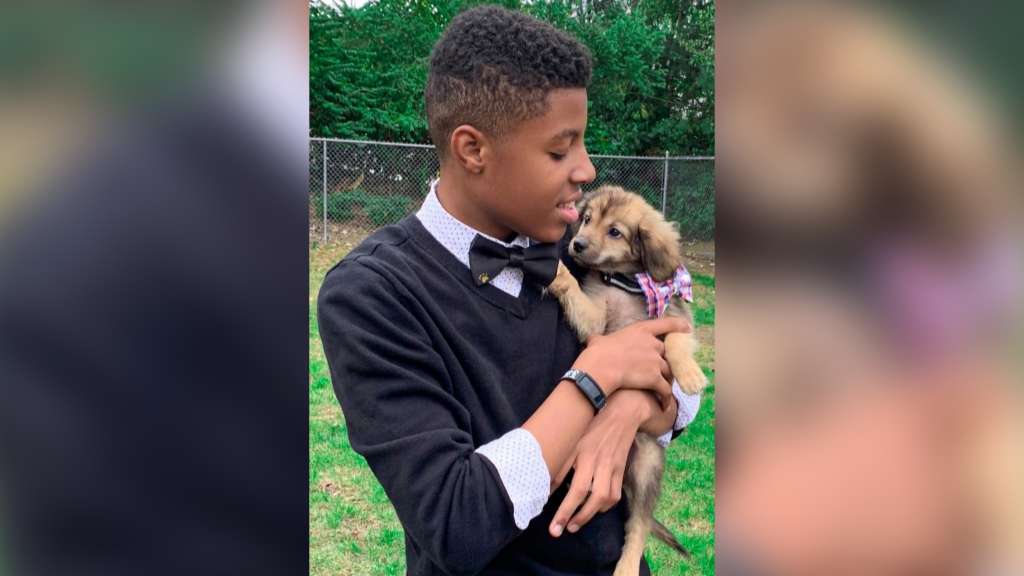 (CNN) — It started four years ago with a small donation.

Darius Brown dropped off about 25 handmade bow ties at New York City’s ASPCA animal shelter. Hundreds of displaced dogs and cats made their way up north to this shelter following Hurricane Irma, hoping to get adopted and find a new forever home. Brown wanted to give back in some way, so he made pet-sized bow ties that the animals could wear to make them stand out to potential adopters.

“I thought to myself, ‘Who wouldn’t love a dog in a bow tie?'” Brown told CNN as he reflected on his journey as a pet haberdasher.

He recalled being eight years old when he started learning how to sew bow ties. He credits his older sister, Dazhai Brown, with being the person who inspired him to start sewing in the first place.

“My sister is like a second mom to me,” Brown said. “And growing up, pretty much anything she wanted to do, I wanted to do.”

Dazhai, a cosmetology student at the time, would make hair bows for her clients. Darius saw her making the hair bows and asked if he could help. Together, they constructed a Teenage Mutant Ninja Turtle-themed bow tie for him. He was so happy with the result that he continued to help his sister, eventually learning how to make bow ties on his own.

“We had Darius start off by just helping me cut the fabric,” she explained, stating that despite his ambitious attitude, his family was initially reluctant to let him help.

Darius was diagnosed with a speech and fine motor skills disorder at a young age. His mother, Joy Brown, explained how he had a challenging time doing tasks that people might take for granted, such as tying his shoes.

“Because of this I felt like it would be better to wait,” Joy said. “But I never wanted him to feel like he was different, so eventually, I got him some safety scissors and he got to work.”

Joy says that sewing helped Darius overcome the challenges that he faced. “And now he does amazing work with the sewing machine,” she continued.

Darius’ bow tie donation to the ASPCA quickly caught the attention of many pet shelters across the country and around the world. He began spending his free time at the sewing machine, fulfilling the growing number of bow tie donation requests. He’s even started his own dog bow tie business called Beaux and Paws.

His work also caught the attention of former President Barack Obama, who sent Darius a letter in the mail, thanking him for his community service.

“I was in awe when I got the letter,” Darius said as he recalled how it left him speechless. “It was amazing and it really inspired me to keep going,” he said.

The 14-year-old explained how he’s made and donated over 600 bow ties over the past four years. His family constantly praises him for his dedication to his craft.

“It can be stressful at times,” Darius admitted. “I always think about how many dogs I can help get adopted.” He thinks about how some shelter dogs that don’t get adopted can possibly get euthanized.

Darius explained how it hurt when he first found out. “I thought about how if a person was in a foster home for too long, they wouldn’t get euthanized,” Darius continued. “But dogs that stay in a shelter too long can?”

The positive reaction from all of the shelters along with the letter from the former President inspired Darius to come up with a new goal for himself: donate bow ties to an animal shelter in every state. He’s made it to DC, and eight states so far, including Pennsylvania, Virginia and Illinois.

Despite Darius’ immense love for dogs, pet restrictions won’t allow his family to have a dog at their apartment complex. “But if I could have any dog that I wanted, I would get a Pomeranian, a Golden Retriever, or a Dachshund.”

The young entrepreneur wants to continue to expand Beaux and Paws and create a clothing line for dogs one day.

With high school right around the corner, Darius is beyond excited for what the future holds. He’s recently been accepted into Choate Rosemary Hall and The Lawrenceville School. His family expressed how proud they are of him and everything he’s accomplished so far.

“He just works so hard in everything he does,” said Dazhai, a current student at Howard University. “I truly want everything for Darius.”

“It just makes me proud to know that he was able to develop this passion and this skill,” Joy said. “And now he uses it to help others.”