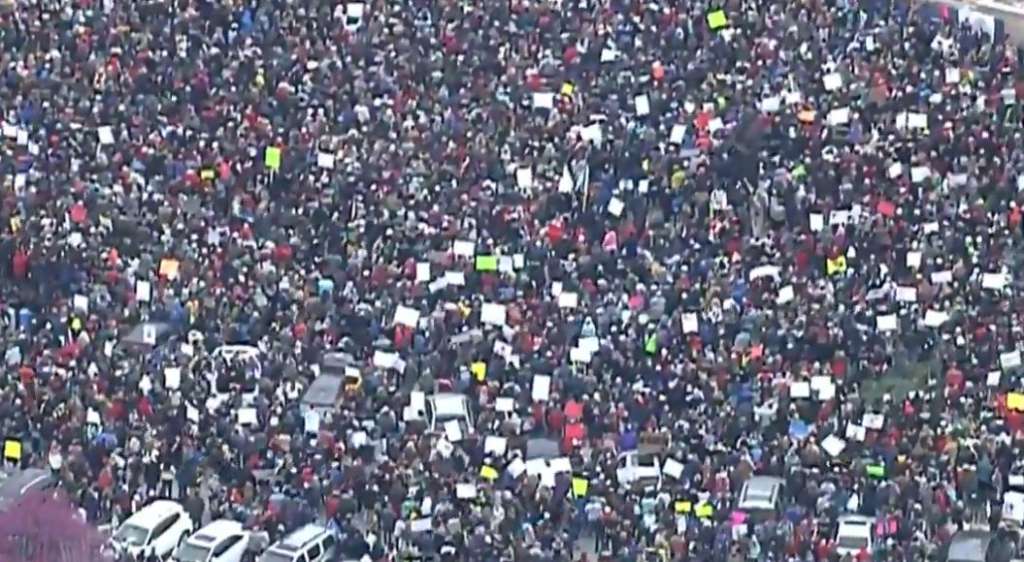 (CNN) — This is about much more than teachers’ salaries.

Tens of thousands of Kentucky and Oklahoma teachers were ditching classrooms Monday to rally at their state capitals, demanding more education funding for students.

“Stop the war on public education!” Kentucky teachers chanted in front of the Capitol in Frankfort.

Inspired by West Virginia teachers, who went on strike and got a pay raise from their state leaders, educators in other states such as Oklahoma, Kentucky and Arizona are taking similar action.

Kentucky teachers are decrying what they call “bait-and-switch” changes to their pensions, after state lawmakers tucked those reforms into another bill about sewage and passed that bill last week.

And in Oklahoma, protesters are rallying for higher teacher and support staff raises, as well as increased funding for education — which has plummeted by 28% over the past decade, the state teachers’ union president said.

There will be no changes to annual cost of living adjustments, which will remain at 1.5%.
New hires will have to enter a hybrid cash balance plan, in which members contribute a specified amount into their account.
Teachers will have a limited number of sick days they can put toward their retirement.
The bill, passed mostly on party lines, has gone to Gov. Matt Bevin — who supports reforming the pension system. State leaders say it’s critical to fix the pension crisis, which has as one of the worst shortfalls in the US.

Furious over the changes, educators called out of work sick or requested substitutes in protest on Friday, resulting in the closure of more than 20 counties’ schools.

In addition to the outcry over the pension bill, teachers are also demanding more funding for schools to help pay for textbooks, technology and school programs.

Oklahoma: Where classrooms don’t have enough textbooks
Teachers across the state flocked to Oklahoma City on Monday, saying concessions made by lawmakers last week aren’t nearly good enough to support the future of education.

Oklahoma is among the bottom three states in teachers’ salaries, and until Thursday, had not received a state raise in a decade. The state teachers’ union has been demanding $10,000 raises for teachers; $5,000 raises for support staff; and $200 million in educational funding.

“This isn’t just about teacher salaries,” said David DuVall, executive director of the Oklahoma Education Association. “This is about funding our schools for our students.”

Last week, legislators approved a measure that includes a $6,100 pay raise for teachers, $1,250 for support staff, and $50 million in education funding.

OEA president Alicia Priest called it a “good starting point,” but not enough. She said some classrooms don’t have enough textbooks, and that some books are more than 20 years old — affecting the quality of education for students.

Priest said the $50 million increase approved by the state last week “will buy less than one textbook per student in Oklahoma.”

“We’ve been cut over 28% in the last 10 years in education funding, and our schools just can’t maintain all of the supplies, instructional materials, textbooks, even copy paper,” she said. “Copies are limited in schools to maybe 30 a week.”

It’s unclear how long the Oklahoma walkout will last.

“We will be back in the schools when our members tell us to,” Priest said.