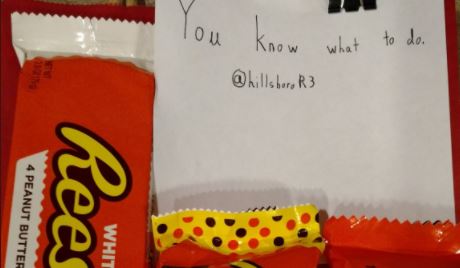 HILLSBORO, Mo. (WSVN) — Students hoping for a Missouri superintendent to cancel school in lieu of a snow day took a few extra steps in an attempt to sway the man’s decision.

Superintendent Dr. Aaron Cornman of Hillsboro Schools took to Twitter to describe what he found outside his door: several Reese’s Peanut Butter Cups with a note attached which read “You know what to do.”

“The first round of “Please Call School Off Tomorrow” candy has arrived. Students in my neighborhood really want a Snow Day!!! They remembered my favorite!” Cornman wrote in the tweet.

The first round of "Please Call School Off Tomorrow" candy has arrived. Students in my neighborhood really want a Snow Day!!! They remembered my favorite! pic.twitter.com/QQGjBF1tDb

According to Cornman, the students were hoping to bribe him into calling a Snow Day and canceling school. However, the bribe proved to be unsuccessful and school went on as planned.

“Hillsboro WILL BE in session today. It’s another great day for the Hillsboro Hawks to soar to new educational heights. It’s cold outside, roads are clear, but the buses and buildings will be warm – see ya there,” Cornman tweeted.

However, this isn’t the first time students have tried to bribe him into canceling school. “Last year it was Hershey bars and I Tweeted to them that I wasn’t a [Hershey] fan…a year later – they remembered and man did they!” he tweeted.

Cornman doesn’t appear to be the only superintendent getting bribed. Dr. Link Luttrell, the superintendent of a nearby district also got a bribe in the form of Nerds on his front doorstep. Ultimately, he did not cancel school either.