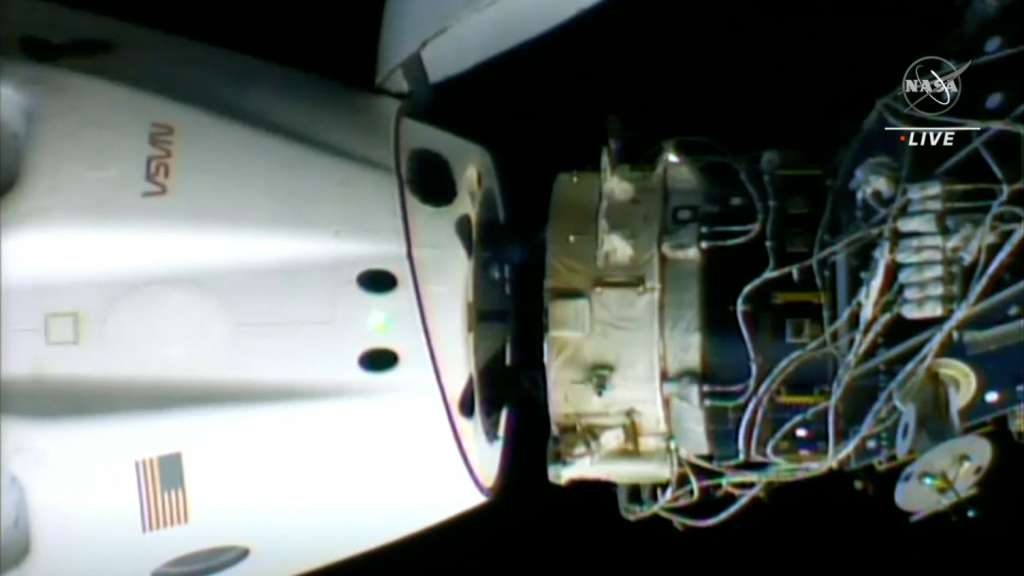 (CNN) — Three NASA astronauts and a European astronaut are returning home from the International Space Station, capping off their six-month mission during which they worked alongside Russian cosmonauts and hosted the first all-private crew to visit the orbiting outpost.

The crew climbed aboard their SpaceX Crew Dragon capsule after midnight and detached from the space station in the early hours of Thursday morning. They’ll spend all day Thursday free flying through orbit as their spacecraft maneuvers closer to the edge of the Earth’s atmosphere.

The most dangerous part of the mission will take place a day later. The SpaceX Crew Dragon will streak back into the atmosphere while traveling at more than 22 times the speed of sound, putting the astronauts through intense G-forces as the final portion of their descent begins. Their capsule will then deploy parachutes and float to a splashdown landing off the coast of Florida. They’re tentatively scheduled to hit the water at 12:43 am ET Friday.

This will mark the conclusion of SpaceX’s third operational mission to the ISS that the company has conducted in partnership with NASA.

SpaceX has had a whirlwind month of activity. It kicked off with the launch of the private AX-1 mission to the ISS on April 8, and the company brought that crew home just last week. Then SpaceX launched the Crew-4 astronauts, who will replace the Crew-3 astronauts on the ISS staff, last Wednesday, then immediately began gearing up for Crew-3’s return. Meanwhile, the company’s Falcon 9 rocket has kept busy launching satellites to orbit, which includes a batch of the company’s Starlink internet satellites, just last Friday.

Falcon 9 rockets have already notched 17 launches so far this year.

The intent of SpaceX’s Crew Dragon program was to return astronaut launches to the United States for the first time since NASA’s Space Shuttle program retired in 2011, allowing NASA to keep the space station fully staffed with its own astronauts as well as astronauts from partner space agencies such as the European Space Agency (ESA). Before the Crew Dragon entered service in 2020, NASA was forced to rely on Russian Soyuz spacecraft for ISS crew transportation.

The four astronauts on the Crew-3 mission are NASA’s Raja Chari, Tom Marshburn, and Kayla Barron, as well a German astronaut with the ESA, Matthias Maurer.

The Crew-3 astronauts kept a strict schedule of running science experiments and maintenance work on the 20-year-old ISS, and they conducted three spacewalks, during which they don the iconic puffy white spacesuits and exit the ISS to float in the vacuum of space. And last month, they had a first-of-its-kind experience hosting non-astronauts on the ISS with the arrival of the AX-1 crew, the all-private mission to the ISS. That mission included three men who paid their way to space and a former NASA astronaut who commanded the mission on behalf of Axiom Space, which brokered the mission with SpaceX.

When asked about how the professional astronauts worked alongside the visitors, Marshburn said they were “great crewmates.”

“They’ve been very kind and gracious with us as well,” he said.

One of the AX-1 crew members, Larry Connor, also told CNN Business, “If it were not for the NASA’s Crew-3 astronauts, and their phenomenal help, we would never — underscore the word never — have been able to accomplish all of our objectives,” Connor said. “We underestimated the time on some of the projects. We had one project early on that we thought was two-and-a-half hours, take five hours.”

During a press conference last month, the Crew-3 also made clear that it is maintaining a friendly working relationship with their Russian counterparts on the space station, despite mounting geopolitical tensions on the ground, and Marshburn said the Crew-3 astronauts made frequent friendly visits to the Russian-controlled portion of the ISS.

“Every day we go over there, and we usually have a meal together at least once on the weekend, maybe watch a movie together,” he told reporters.

During a ceremony in which Marshburn handed off the role of commander of the ISS to his Russian colleague Oleg Artemyev on Wednesday, Marshburn said that the “lasting legacy of the space station is very likely to be international cooperation and a place of peace.”

Addressing his successor, Mashburn said, “Oleg, you’re a very strong and experienced cosmonaut, astronaut. I know we’ll be leaving the space station in good hands with you.”

Artemyev said, “I accept” and added, “Thank you for key. Thank you for friendship. It was an unbelievable time together,” a possible reference to being aboard the orbiting workstation at a time of war.

Barron, who has a a master’s degree in nuclear engineering from the University of Cambridge, was selected as a NASA astronaut in 2017 and comes directly from a field of work that involves extreme living conditions and long bouts of isolation: submarines. Barron became one of the first women ever to serve on a US Navy submarine back in 2010.

Chari also joined NASA’s astronaut corps in 2017 as one of its newest inductees, and marks his first flight to space. He has a master’s degree in aeronautics and astronautics from MIT and graduated from the US Naval Test Pilot School, which has a long history of providing a pipeline to the astronaut corps.

Chari and Barron — both of whom had never been to space prior to the Crew-3 mission — have also both been selected for NASA’s corps of Artemis astronauts, who could fly on future missions to the moon.

Barron said they envisioned conducting spacewalks during the Crew-3 mission as the best preparation: “When we start to think about things like going back to the moon — doing the moonwalk — I think that’s the best way we could have possibly prepared.”

This mission also marked the first trip to space for Germany’s Maurer of the ESA, who joined Europe’s astronaut corps in 2015.

“I have to say, we really feel like we were super well prepared by our training on the ground to experience this, but there’s only so much you can prepare for,” Barron said about experiencing space for the first time. “I think you can intellectualize the experience of living and working in microgravity, but until you experience it, you don’t really know what it’s going to be like.”

Microgravity can be disorienting, as Maurer told reporters.

“The room is three dimensional, so even if you put something on the wall, and you think, ‘Okay, I know where this is,'” he said, “and suddenly it seems like you lost something.”

The mission’s pilot, NASA’s Marshburn, is the sole veteran astronaut among the crew. He has a background in physics and holds a doctorate of medicine, and he first joined NASA in the early 1990s as a flight surgeon. He joined the NASA astronaut corps in 2004 and has previously flown on one Space Shuttle mission and one Russian Soyuz mission to the ISS.

“I was a bit surprised to find out how emotional I got” on this mission, Marshburn said. “When I got to see my crewmates see space for the first time and watch them look out the windows…I suited them up for their first [spacewalk] — and how protective I felt and how emotional it was to see them go out to hatch. I was having a hard time getting work done. I was going window to window to watch them to make sure they were okay.”