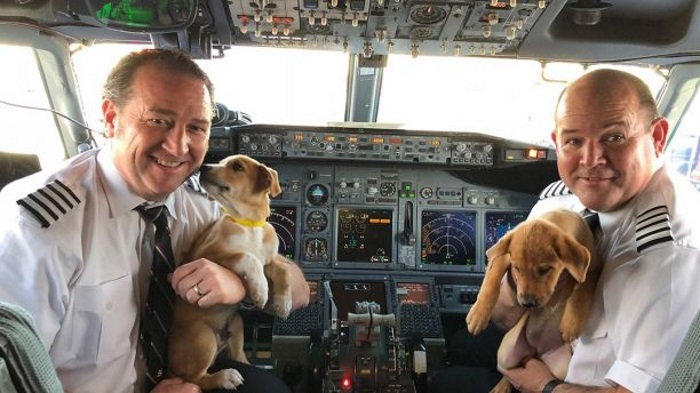 (WSVN) - Dozens of dogs and cats from Puerto Rico got first-class treatment, courtesy of Southwest Airlines.

The airline used one of their Boeing 737s to transport 14,000 pounds of humanitarian supplies to San Juan on last week. On the return trip, they brought 62 dogs and cats back to Baltimore, where they were put up for adoption.

Southwest partnered with Lucky Dog Animal Rescue, a non-profit based in Virginia, in a team effort that took months of organization.

Mirah Horowitz, the executive director and founder of Lucky Dog, told the Dallas News it all started when she sent an email to Southwest’s CEO Gary Kelly, asking if the airline would consider helping the hurricane-ravaged country by donating a round-trip flight.

Kelly was on-board with the idea, and the furry flight was soon set in motion with pilots and flight attendants who all agreed to volunteer their time for the trip. PR Animals, an animal rescue organization based in Puerto Rico, identified the pets from across the island in need of forever homes. The animals had been found amid the devastation after Hurricane Maria, with many abandoned and starving.

“The surrenders. Oh, those were so hard to see,” Marie Rivera from PR Animals told the Washington Post. “And when you give up a dog, it’s like giving up hope that your life is going to be normal again soon.”

After delivering the supplies to San Juan’s airport, volunteers loaded up the plane with dogs and cats.

“Ladies and gentlemen, we’ll be coming through the cabin shortly to get you some drinks,” the flight attendant announced to volunteers and media on the plane before takeoff, the Post reports. “And to say hi to the puppies.”

One flight attendant, Janie Goravica, said she volunteered to work on the flight specifically to look for a new dog to adopt.

Once on the ground in Maryland, most of the animals were adopted quickly. The few that have not yet found their forever homes are listed on the Lucky Dog website.