Some migrants who were flown to Martha’s Vineyard will still ‘wind up in Florida anyway,’ advocacy organization says 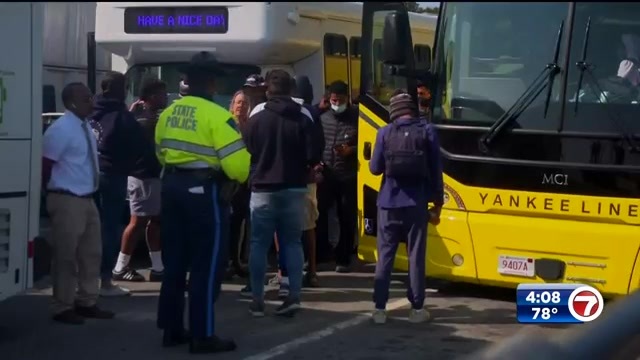 (CNN) — Florida Gov. Ron DeSantis spent taxpayers’ money on flying migrants to Martha’s Vineyard in Massachusetts and some of those people are “still going to wind up in Florida anyway,” said Domingo Garcia, the president of the League of United Latin American Citizens (LULAC).

The roughly 50 migrants touched down on the island earlier this week, surprising a community that was not expecting their arrival but quickly worked to coordinate and address the migrants’ needs. On Friday, the group was taken to a military base to receive shelter and humanitarian support, officials said.

The flight’s stunt was part of a series of efforts by Republican governors who, critical of federal efforts on southern border security, have begun transporting migrants to liberal cities and states. Also this week, two buses of migrants sent by Texas Gov. Greg Abbott arrived outside Vice President Kamala Harris’ official residence in the nation’s capital.

Many of the migrants who were sent to Massachusetts did not want to stay in Martha’s Vineyard because they have family or friends in other parts of the country like Miami and Portland, Oregon, and now they’re trying to figure out how to get tickets to those places, Garcia said. Three people he spoke to wanted to go to Florida, he added.

“It’s a political stunt,” Garcia told CNN over the phone Saturday. “They’re going to wind up in Miami.”

Migrants released from government custody often move to other cities across the US as they go through their immigration proceedings.

The two flights of migrants who arrived in Massachusetts — and for which Florida’s governor claimed credit — were coming from Texas, not Florida. But DeSantis has for months been talking about plans to get his state involved in redirecting migrants from the southern border and to liberal areas. And on Friday, he set the expectation for buses and “likely more” flights full of migrants paid for by Florida, adding that “these are just the beginning efforts.”

He criticized DeSantis and Abbott over their treatment of the migrants, saying the governors want to “score political points with their base.”

Lawyers for Civil Rights, a group of attorneys representing more than 30 of the migrants flown to Massachusetts, on Saturday asked US Attorney for Massachusetts Rachael Rollins and the state’s attorney general to open criminal investigations into the flights, also calling them a “political stunt.”

Rollins told reporters on Thursday she would be speaking with members of the Department of Justice about DeSantis sending the migrants to Massachusetts, saying at the time she did not yet have enough information to say whether he broke any laws in doing so, and added their first priority was making sure the people who arrived were treated respectfully.

Meanwhile, Garcia on Saturday described the scene when the migrants left Martha’s Vineyard for Joint Base Cape Cod — already an emergency shelter designated by the state emergency management agency — a day earlier and local volunteers bid them goodbye.

“Everyone was clapping and cheering them on,” he said. “It’s actually what America’s supposed to be like.”