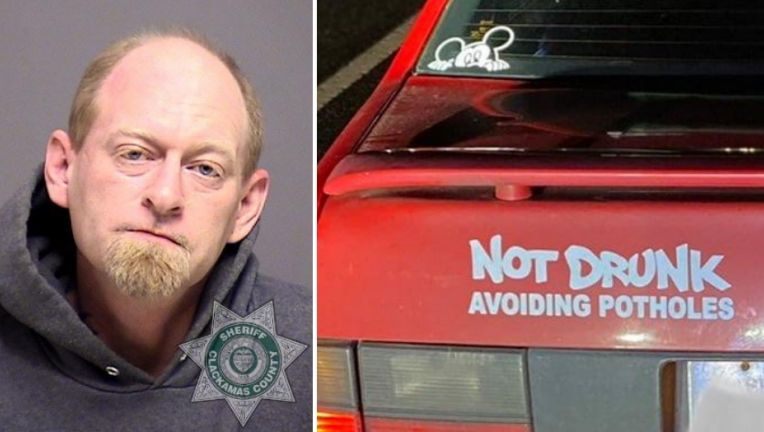 PORTLAND, Ore. (WSVN) — An Oregon man driving with a “not drunk, avoiding potholes” sticker on his car was arrested for drunk driving.

Deputies said they pulled over Cannon on Feb. 6 when they witnessed him speeding.

When the deputy pulled Cannon over, they told him to turn off his car. They said he didn’t respond and instead, his car rolled backward about 25 feet and hit the front of the deputy’s cruiser.

According to the sheriff’s office, when the deputy asked Cannon why he let his car roll into the cruiser, he ‘reportedly looked confused and then looked back, saying, ‘I didn’t know that happened.”‘

The deputy also said they could smell alcohol coming from inside the car and saw an open can of Busch Light in the Jetta’s cupholder.

Deputies said when asked if he had any weapons, Cannon admitted to having a loaded Glock in the car. They said the gun did not have a serial number and deputies determined Cannon was a convicted felon. His license had also been suspended.

The sheriff’s office said in addition to the beer can in the cup holder, a search discovered several empty beer cans inside the car, along with a baggie in the center console that contained cocaine.

Deputies said Cannon explained that he planned to party with a friend this weekend.

Deputies said Cannon did a field sobriety test, and when asked how he thought he did, he responded “Not good.”

The sheriff’s office also added that Cannon had a .22% blood alcohol concentration.