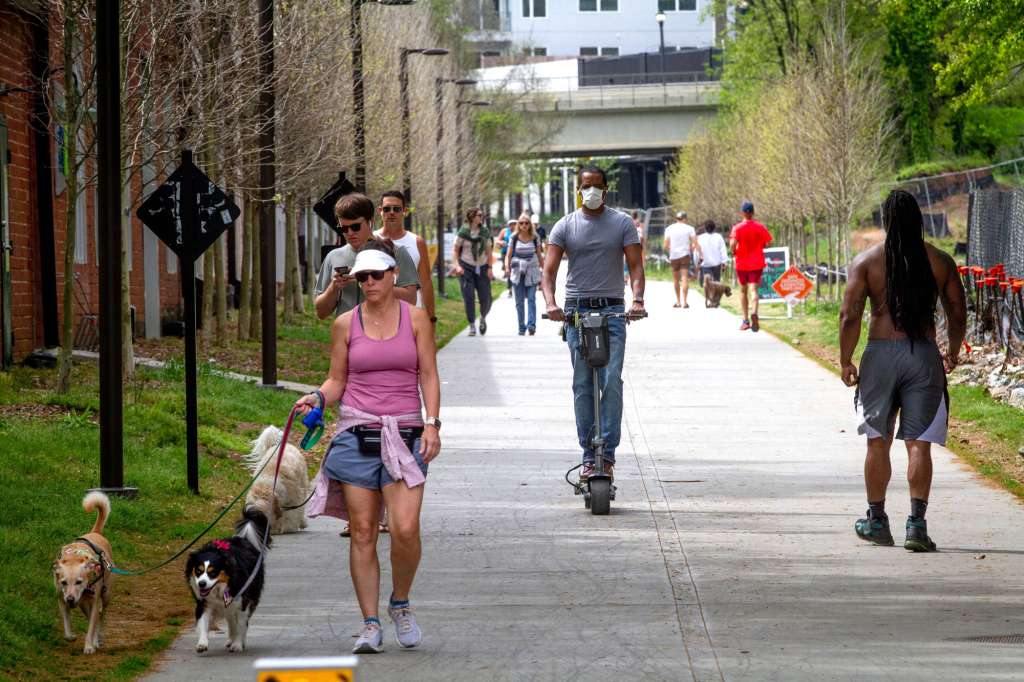 Marcus Bouliany, center, wears a mask while making his way along the BeltLine in Atlanta, during the coronavirus outbreak Saturday, April 4, 2020. (Steve Schaefer/Atlanta Journal-Constitution via AP)

(CNN) — With health experts warning that warmer months won’t bring an end to coronavirus, officials are developing a framework for what America’s new normal could look like.

President Trump has previously claimed that increased temperatures will bring an end to the virus. But members of a National Academy of Sciences committee said in a letter to the White House Tuesday that the data is mixed on if the virus spreads less easily in the heat, however that might not matter much given the lack of immunity.

With more than 432,000 cases and 14,817 deaths, the nation has already had to adjust to a world where social distancing is key to reducing the impact of coronavirus. Families gathered Wednesday night for virtual Passover Seders and weekend Easter celebrations are anticipated to be online as well for many.

Though Attorney General William Barr called current social distancing measures “draconian,” Dr. Anthony Fauci told lawmakers that the White House task force is developing a framework for what a return to normalcy will look like for Americans, a source told CNN.

But normal may not look exactly like it once did. The handshake, for example, may need to become a thing of the past, said Fauci, the head of the National Institute of Allergy and Infectious Diseases (NIAID).

“I think what we’re going to have embedded and imprinted in us forever is the realization that something as catastrophic as what the world is experiencing now can happen,” Fauci said.

Wednesday was another record day of deaths with an increase of 1,922 reported fatalities, according to data supplied by Johns Hopkins University.

And though the impact has been grave thus far, there is a glimmer of hope with models projecting lower numbers of deaths by the time the pandemic subsides.

The US will reach its highest daily number of deaths on or around Sunday, according to modeling by the Institute for Health Metrics and Evaluation at the University of Washington in Seattle. The peak of demand on hospital beds and ventilators is projected to hit on or around Saturday.

On Tuesday, the IHME estimated about 82,000 people will die from coronavirus disease by August. On Wednesday, that estimate was lowered to 60,415.

That decrease is thanks to the actions taken by Americans, said White House coronavirus response coordinator Dr. Deborah Birx.

“What has been so remarkable, I think, to those of us that have been in the science field for so long,” Birx said, “is how important behavioral change is, and how amazing Americans are at adapting to and following through on these behavioral changes.”

Some areas have yet to see high transmission rates of the virus, and the US Centers of Disease Control and Prevention has deployed eight teams in hopes of keeping it that way, a federal official involved in the day-to-day coronavirus response told CNN.

The “community protection field teams” work directly with state and local health departments, but the official declined to say where the teams would be placed.

A second federal health official said at least one would be deployed to Wyoming.

“They have not had a lot of cases. You want to make sure it stays that way,” the senior federal health official told CNN when asked about Wyoming. “You work closely with them to make sure their public health capacity is working. Find cases, interrupt clusters, and do containment as opposed to mitigation,” the official said.

“If containment is achieved, you don’t have to have broader heavy duty mitigation restrictions.”

Philadelphia and D.C. expected to be new hotspots, official says

Philadelphia and Washington D.C. are expected to be new hotspots for the coronavirus pandemic, White House coronavirus response coordinator Dr. Deborah Birx said in a conference call with House Democrats Wednesday, according to a source on the call.

Vice President Mike Pence said Wednesday that he was briefed that Philadelphia is “an area of particular concern.”

“Our message to the people of the Philadelphia area is now more than ever, practice the social distancing so that Philadelphia and to some extent even Pittsburgh do not have to endure what other communities before them have had to endure,” Pence said.

In the meantime, many states are reporting that social distancing measures and stay at home orders are working to mitigate the virus.

“That makes a difference in how we get out of this, how soon we get out of this and that we beat that curve and so I want to thank everybody for paying such close attention to it and doing a good job,” Hutchinson said.

And though Kentucky saw its largest increase in reported cases Wednesday, Gov. Andy Beshear said that the state’s low numbers relative to the rest of the nation show that social distancing measures are working.

Louisiana Gov. John Bel Edwards said Wednesday that although the state’s cases are still growing, the trajectory of growth is lower than anticipated. But, he said, the good news should not be a sign for residents to let their guards down when it comes to social distancing and stay at home orders or cases will spike right back up.

California is a hotspot with more than 18,700 cases, but the state has seen results as well with its strict social distancing measures. Responding early to the virus has slowed the doubling of cases in Santa Clara country from three days to two weeks or longer, said Health Officer Dr. Sarah Cody.

“We cannot let up. Most of the people living in our community are still susceptible,” Cody stressed. “This is a marathon, maybe an ultra-marathon.”

A jail in Chicago is now the largest known source of coronavirus infections in the US outside of medical facilities, according to the Cook County Sheriff’s Office.

The Cook County Sheriff’s office said Wednesday 251 detainees and 150 staff members of the Cook County Jail have tested positive for the virus. Of the detainees sickened in the outbreak, 22 are hospitalized for treatment and 31 others have been moved to a recovery facility.

A detainee died of apparent coronavirus complications, but the autopsy is pending, the sheriff’s office said.

Chicago, which is in Cook County, expects a refrigerated warehouse to be operational starting Thursday to potentially store more than 1500 bodies, according to the Cook County Chief Medical Examiner Dr. Ponni Arunkumar. The medical examiner’s office had already begun using a refrigerated truck to store bodies as the coronavirus death toll went up, but they are very near capacity, Arunkumar told CNN.

In the California prison system, the number of inmates infected grew by more than seven times in a little more than a week and staff cases nearly tripled, the California Department of Corrections and Rehabilitation said Wednesday.

“And there’s a potential of us dying, too.”