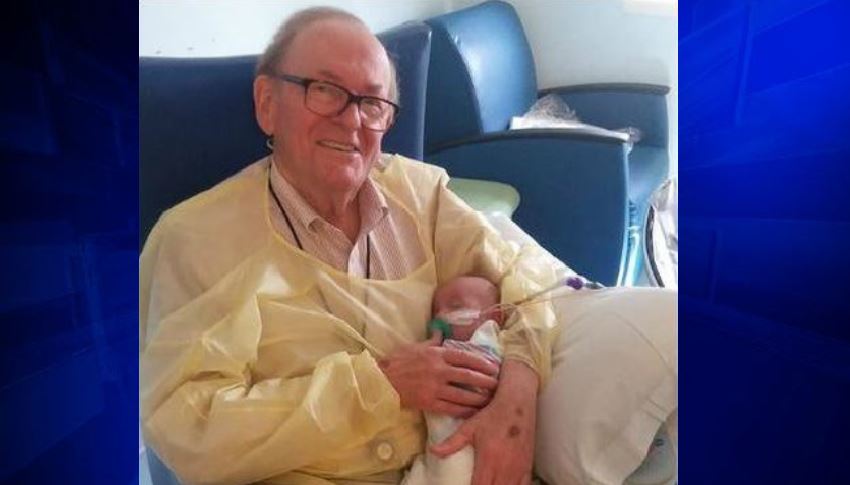 ATLANTA, Ga. (WSVN) — A retired man, known fondly as the “ICU Grandpa,” regularly volunteers at an Atlanta children’s hospital to give the facility’s infants a loving embrace.

Every Tuesday, “ICU Grandpa” David Deutchman arrives to Children’s Healthcare of Atlanta’s pediatric care unit to hold babies who are unable to be with their parents that day, according to the hospital.

He does the same for ill or premature babies at the hospital’s neonatal intensive care unit on Thursdays.

Deutchman has been visiting CHOA for over 12 years and told an Atlanta TV station that he began volunteering after he retired from a career in international business marketing.

On Sept. 27, the hospital posted a photo to Facebook of the “ICU Grandpa” holding an infant boy named Logan, who had been the hospital for over 6 weeks. Logan was born premature at 25 weeks.

“This photo captures just one precious moment with a legend of a hospital volunteer who’s been holding patients, and their parents’ hands, for 12 years,” said the hospital in a Facebook post.

Logan’s mother was said to be close to tears when she saw her baby in Deutchman’s embrace. Hospital officials said Deutchman greeted her with a smile and introduced himself as the ICU Grandpa.

“Every night, his mom goes home to be with his big sister,” the post continued. “Every morning, she drives back to Scottish Rite feeling ‘anxious that he’s been missing his mommy.'”

One woman who saw the photo even has her own special connection to the “ICU Grandpa.”

“I’ve known David as a special man for 53 years — he’s my dad,” Susan Lilly commented on the post. “To read the thousands of comments and see the outpouring of affection is very moving to our entire family. Thank you for recognizing my dad. He truly loves what he does.”

Deutchman is the father of two daughters in their 50s, and he is the grandfather of two grandchildren who are 19 and 21 years old.