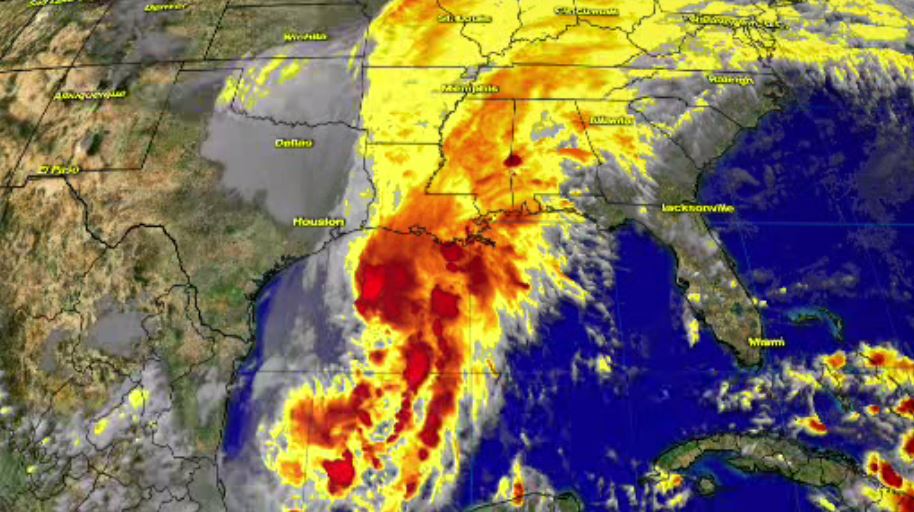 JACKSON, Miss. (AP) — What’s left of Tropical Storm Olga was causing soggy conditions in Mississippi and Alabama on Saturday and dozens of flights were cancelled or delayed at New Orleans’ main airport after two power outages.

There were no reports of major flooding, but several trees were downed. A wind advisory remained in force for eastern Mississippi. Meteorologist John Moore of the National Weather Service in Jackson said the wind could bring down more trees weakened by recent drought conditions and knock out power.

The mayor of Tupelo, Mississippi, was trapped in his home for about 1½ hours Saturday by a downed tree and was taken out on a stretcher by first responders. The fallen tree caused significant damage to Mayor Jason Shelton’s home, the Northeast Mississippi Daily Journal reported.

City spokeswoman Lucia Randle said Shelton was hospitalized and “doing well.” She did not give further details.

The storm spawned multiple tornado warnings, and at least one twister touched down in Mobile. The weather service in Mobile planned to survey the area to determine the tornado’s path and intensity.

Meteorologist Gary Goggins of the NWS in Birmingham, Alabama, said the primary hazard now is gusty winds, possibly up to 40 mph (64 kph) around Tuscaloosa.

“Olga has dissipated but remnants are pushing north into Tennessee,” Moore said.

On Saturday evening, the Tennessee Highway Patrol said strong winds caused about seven semi-trailer trucks to overturn on Interstate 40 in western Tennessee. The highway was closed in both directions.

Airport officials, via Twitter, reported shortly before noon Saturday there was a second outage of power at the airport, the result of powerful winds from Olga that ripped through the area overnight. Power had been out for hours earlier, canceling and delaying dozens of flights before it was restored about 10 a.m.

Entergy utility crews returned to the airport and restored power around 1:15 p.m. It was the second time they had been at the facility where lines of weary travelers grew inside and outside.

New Orleans city officials said there were “over 25 reported tree emergencies” and crews were working to clear debris from roads. Mandeville Mayor Donald Villere said four homes in his city have trees on them. Crews, so far, have removed about 30 trees from roads in the Covington, Abita Springs, Bush, Talisheek, Mandeville and Hickory areas.

At its peak, Entergy Louisiana’s power outage map showed close to 70,000 buildings without power across Louisiana, including 26,000 in Jefferson Parish and close to 19,000 in Orleans as Olga rushed onshore with higher-than-anticipated winds. There were also more than 10,000 outages reported in Tangipahoa Parish.