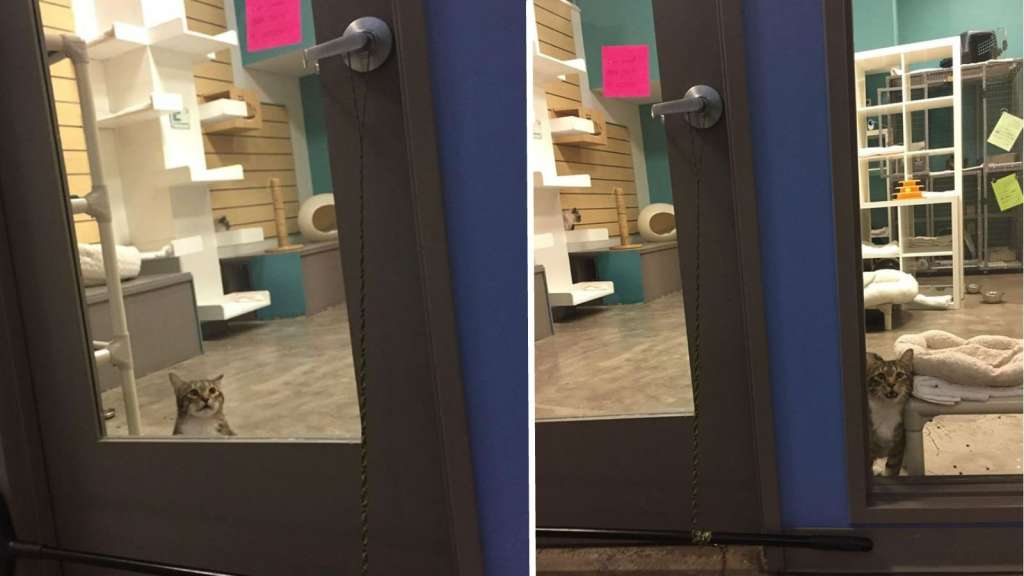 A mutinous cat was put in 'solitary confinement' for freeing other cats from a shelter. Now he's a star

(CNN) — Quilty the cat, welcome to the resistance.

This wily 6-year-old rescue cat has become the newest darling of the internet thanks to his mutinous attempts to free himself and the rest of his cat brethren from the cushy confines of the Friends for Life Animal Shelter in Houston, Texas.

A set of very angry photos of Quilty serving time for his crimes have caught fire online, an important reminder that cats are lawless creatures who can and will betray us the moment they feel it necessary.

“Quilty can be a little difficult,” said Jennifer Hopkins, the communications lead at Friends for Life.

For the last few months, Quilty has been a resident of the shelter’s cat room. Hopkins says that after he arrived, the door to the room kept mysteriously opening.

“We would come in in the morning and have to collect all 15 of the cats who had had a blast during the night,” she told CNN.

A review of security footage showed the culprit was Quilty, who would jump up and pull the handle down on the door. Three times, he managed to Houdini himself and the dozen or so other senior cats to freedom — or, at least, another room.

Eventually, the shelter’s workers had to put him in “solitary confinement” in the building’s lobby while they Quilty-proofed the premises. This was its own mistake.

Pictures of the unjust confinement won the little insurgent thousands of fans on Facebook. It may be his resemblance to Smudge, the cat grimacing over a plate of salad that has become a well-worn meme. Feline malcontent, after all, is an eternal spring of humor.

Whatever the reason, people are now clamoring to adopt the cat that, may we remind you, can open doors and is absolutely not sorry about it. In fact, according to Hopkins, Quilty’s nickname at the shelter is “spicy a-hole.” You can draw your own conclusions as to why.

Despite it all, Quilty holds a special spot at the rescue. He was born in 2012 and, like the rest of his litter, was named after a character from the Vladimir Nobokov novel “Lolita.” And, like his literary source material, the cat would prove to be problematic.

Hopkins says he was almost immediately adopted to a loving household, but a few months ago his owner needed to move and couldn’t bring Quilty with her. Instead, he ended up back at Friends for Life.

“We have a lifetime commitment for all of our animals to make sure they’re safe. We spend a lot of time and effort on them,” Hopkins said.

“After all, we get the weird ones,” she added.

The shelter has embraced Quilty’s sudden fame on its Facebook page with hashtags like #FreeQuilty and #QuiltyNotGuilty.

Luckily, most people love weird cats, so Quilty has already been matched with a potential adoptive family and is awaiting next steps so he can move in to his new forever home.

And, hopefully, not try to break out of it.