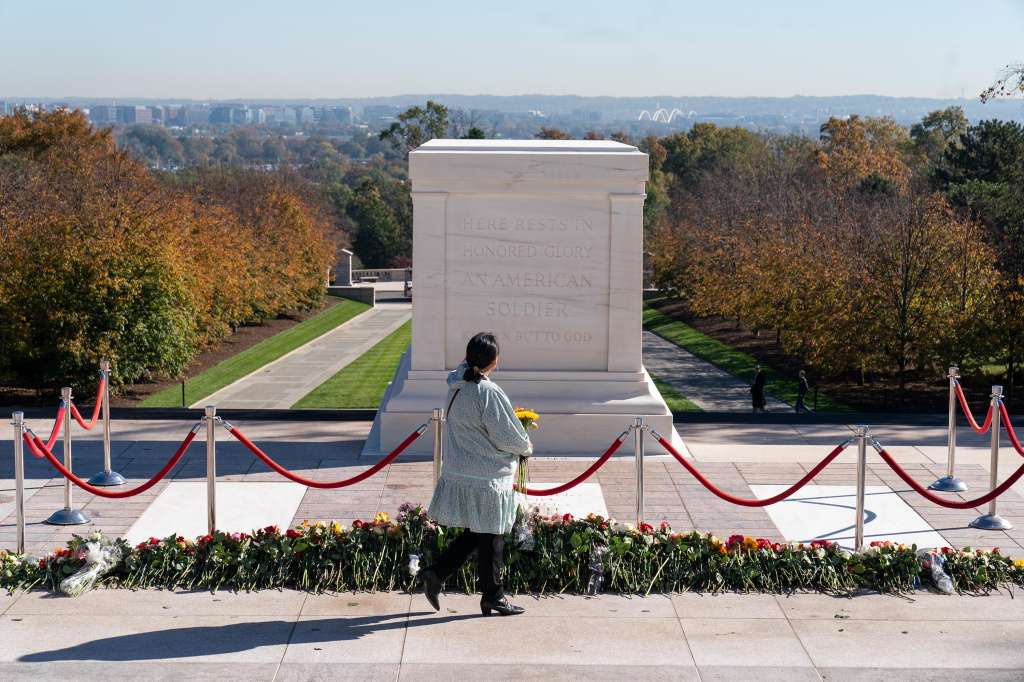 A woman arrives to place flowers during a centennial commemoration event at the Tomb of the Unknown Soldier, in Arlington National Cemetery, Tuesday, Nov. 9, 2021, in Arlington, Va. (AP Photo/Alex Brandon, Pool)

(CNN) — For the first time in nearly a century, members of the public will be able to walk on the Tomb of the Unknown Soldier plaza and lay flowers before the sacred memorial site in Arlington National Cemetery on Tuesday and Wednesday.

It’s the first time in 96 years that visitors have been allowed to approach the Tomb, according to Karen Durham-Aguilera, the executive director of Army National Military Cemeteries and Arlington National Cemetery.

The rare chance for the public to get close to the Tomb of the Unknown Soldier falls on its centennial commemoration.

“The next two days will truly be a historic and once-in-a-lifetime opportunity,” she said Tuesday morning, kicking off the start of the Tomb’s two-day flower ceremony.

The Tomb of the Unknown Soldier has been a final resting place for three unknown US service members, beginning in 1921, but has also served as a symbolic grave for unidentified or unlocated American solders.

“As you lay your flower, we at Arlington encourage you to reflect on the meaning of the Tomb. By the simple act of laying a flower, you are not only honoring the three unknowns buried here but all unknown or missing American service members who made the ultimate sacrifice in service to our nation,” Tim Frank, the Arlington National Cemetery’s historian, said during Tuesday’s opening ceremony.

Tuesday’s start of the flower ceremony also included a smudging ceremony and a prayer led by Crow Nation.

On Tuesday morning, a crowd of people and families, including Sen. Tom Cotton of Arkansas, an Army combat veteran, lined up to place a flower at the Tomb.

Visitors to the Arlington National Cemetery will need to provide a government-issued ID for entry.

There will be an invite-only wreath laying ceremony at the Tomb of the Unknown Soldier on the nation’s observance of Veterans Day on Thursday, which President Joe Biden plans to attend.