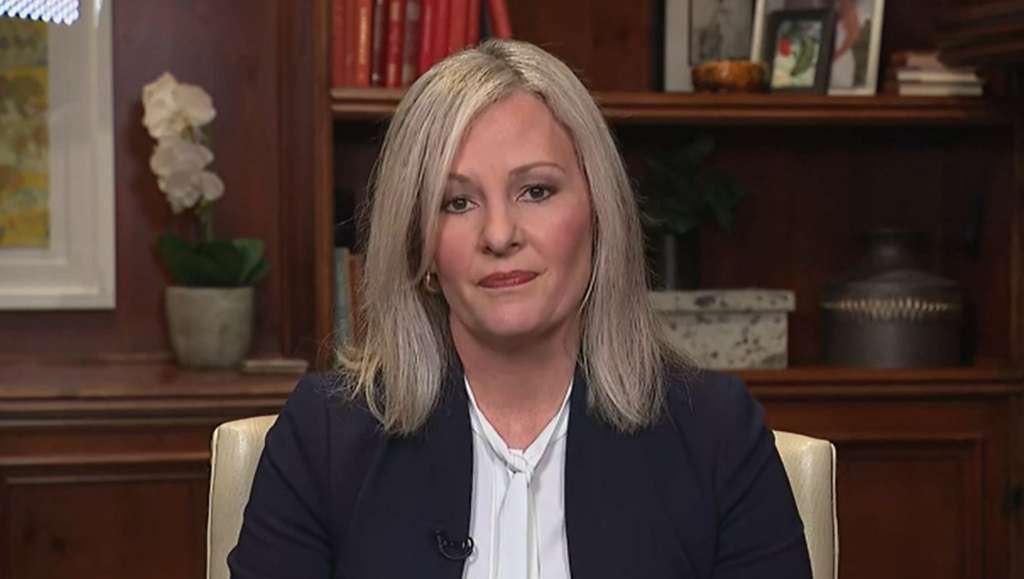 OXFORD TOWNSHIP, Mich. (AP) — The prosecutor overseeing the case against the student accused in last week’s deadly Michigan school shooting and who took the rare step of charging his parents left open the possibility Monday that school officials could also face charges, saying “in this case, a lot could have been done different.”

But she noted that three hours before Ethan Crumbley allegedly opened fire, killing four fellow students and wounding six others and a teacher, the 15-year-old was sent back to class after a meeting between school counselors and his parents over a drawing a teacher found on his desk that included a bullet and the words “blood everywhere.”

“In this case, a lot could have been done different. I mean at that meeting he was allowed to go back to school,” she said Monday during an interview on ABC’s “Good Morning America.”

“We know that he either had that weapon with him or someplace where he could have stored it in the school. But he had it in the school, there’s no question. And leaving the decision to parents about whether he goes home or not …” she added, not finishing the sentence.

Tim Throne, superintendent of the Oxford school district, said Crumbley and his parents met with counselors on the day of the shooting. He said counselors found the teen “calm” and didn’t believe he would harm others.

The parents, Jennifer and James Crumbley, were asked to take their son home but “flatly refused,” Throne said.

Throne said a third party will investigate the events that occurred before the school shooting in Oxford Township, a community of about 23,000 people roughly 30 miles (50 kilometers) north of Detroit. Michigan Attorney General Dana Nessel said her office could conduct the probe and did not rule out investigating, even if the school district declines her offer.

“We’re better suited to do this than a private actor like a security firm or a law firm or anything of that nature,” she told The Associated Press on Monday. “When the institution is serving as a client and they hire a private agency, many times that is only sort of to cover up for any mistakes that might have been made as opposed to really getting to the truth of what occurred.”

Nessel said she is not looking to blame the school district. A review of the tragedy, she said, will show what happened, identify possible violations of protocols and provide lessons so students are kept safe.

Asked whether school staffers may be charged, she said: “I’m not going to rule anything out. But we’re going into this with the hope that we can discover best practices, best policies, best procedures and make recommendations to schools around the state, possibly to the Legislature for laws that should be implemented and to ensure the safety of schoolchildren around the state.”

Ethan Crumbley has been charged as an adult with murder, terrorism and other crimes in the attack. And McDonald filed involuntary manslaughter charges against his parents, saying they failed to intervene on the day of the tragedy despite being confronted with the drawing and its disturbing message.

McDonald said Monday that Crumbley’s parents did not mention during the meeting at the school that Ethan had access to a 9mm semi-automatic pistol. Authorities say he used the gun to carry out the attack, and that his father bought it for him at a local gun shop on Black Friday as an early Christmas present. Although the gun was legally sold to James Crumbley, minors in Michigan cannot possess guns aside from in limited situations, such as when hunting with an adult.

“You can’t even in an airport mention anything that even remotely indicates that there might be some sort of violence on a plane. You’ll be immediately extracted. And yet we have a kid who is … saying some pretty concerning things and he was allowed to go back to school, and neither parent mentions that he had access to a weapon,” McDonald said.

McDonald said prosecutors have evidence suggesting that the couple “purchased that weapon for their 15-year-old and bragged about it online — thought this was some joyous occasion as a present.”

And she said the teen had access to the gun “whether it was locked or not” at his family’s home.

The parents were taken into custody early Saturday after they were caught hiding inside in the Detroit studio of artist Andrzej Sikora. The artist’s attorney said Sunday that he is cooperating with investigators and didn’t know the couple was facing charges or that they had stayed overnight at his studio while authorities were searching for them.

The couple’s attorneys have said they didn’t intend to flee.

In a message to students posted on the school district’s website Monday, Oxford High School Principal Steve Wolf said formal classes aren’t expected to resume until at least January, after the winter break. Wolf also said staff spent the weekend sorting backpacks and other items left behind at the school and plan to organize time to pick those up.

“We truly miss you and can’t wait to see you soon,” he wrote. “It has been extremely difficult working through this tragedy, and seeing many of you at our various community events has helped in the healing process. It’s been healing and helpful to share stories, cry together, give hugs and just be together.”