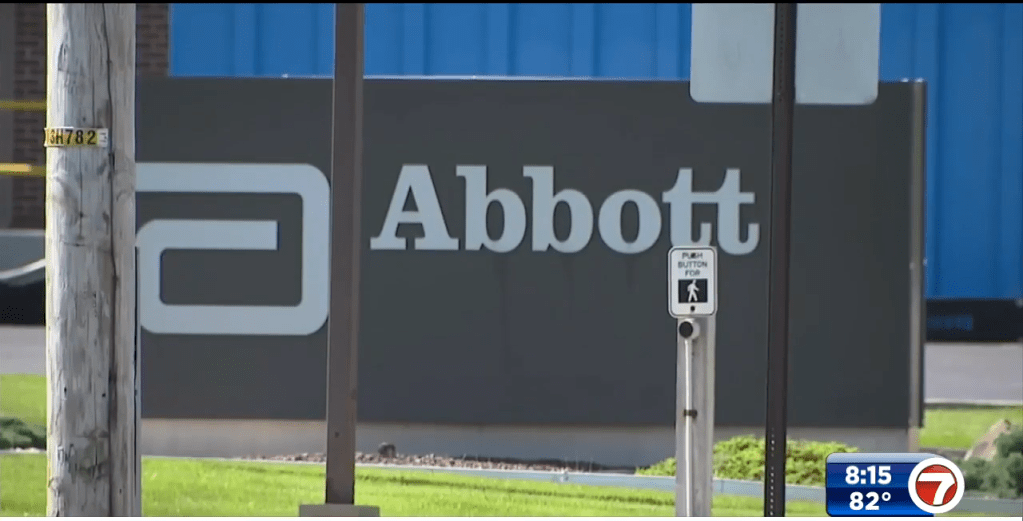 Severe weather has forced Abbott Nutrition to pause production at a Michigan baby formula factory that had just restarted after being closed for several months, contributing to a national shortage.

Production for Abbott’s EleCare specialty formula has been suspended, but there is enough supply to meet demand until production is restarted, the company said. Abbott had prioritized ramping up production of the specialty formula for infants with severe food allergies and digestive problems who have few other options for nutrition.

Abbott says it needs to assess damage and re-sanitize the factory after severe thunderstorms and heavy rains swept through southwestern Michigan late Monday. Spokesman Jonathon Hamilton said flooding hit a few areas of the factory, but he declined to provide more specific details about damage.

The storm also brought high winds, hail and power failures to Sturgis, Michigan, where the factory is located. The company expects production and distribution to be delayed for a few weeks as it cleans the plant.

Once it restarts, the factory will begin with the production of EleCare and other specialty formulas. Abbott says it also plans to restart production of its Similac formula as soon as possible.

Abbott had initially restarted the factory on June 4 after it had been closed since February due to contamination.

Abbott recalled several leading brands of formula then, including Similac. That squeezed supplies that had already been strained by supply chain disruptions and stockpiling during COVID-19 shutdowns.

The ongoing formula shortage has been most dire for children with allergies, digestive problems and metabolic disorders who rely on specialty formulas.

FDA Commissioner Dr. Robert Califf told a Senate committee on Thursday that government work done to increase the supply means that there will be more than enough product to meet current demand. He also noted that other U.S. baby formula manufacturers are running their plants around the clock.

Califf said they hoped to have a “super supply” of formula to get shelves fully restocked in perhaps two weeks.

“But it’s too early to give an exact estimate of what the delay will be in the Sturgis plant,” Califf said at a hearing of the U.S. Senate Committee on Health, Education, Labor & Pensions.

Califf called the flood at the plant “an unfortunate setback and a reminder that natural weather events can cause unforeseen disruptions in supply chains.”

Abbott is one of just four companies that produce about 90% of U.S. formula. Hamilton said Abbott has produced 8.7 million pounds of formula in June, or 95% of what it produced the month before the recall.

The Michigan factory was closed after the Food and Drug Administration began investigating four bacterial infections among infants who consumed powdered formula from the plant. Two of the babies died. The company continues to state that its products have not been directly linked to the infections, which involved different bacterial strains.

FDA inspectors eventually uncovered a host of violations at the plant, including bacterial contamination, a leaky roof and lax safety protocols.

Califf said he agreed with the point. “Definitely we had inspections were put on hold and there’s been a price to pay for that,” Califf said.