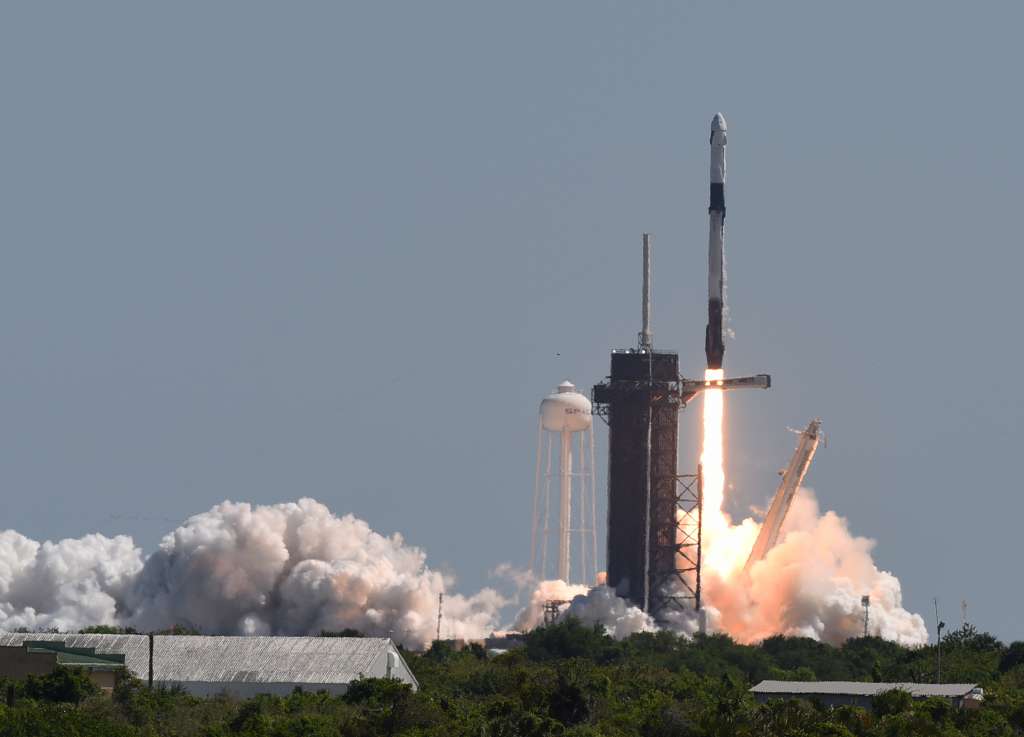 CAPE CANAVERAL, FLORIDA, UNITED STATES - APRIL 08: A SpaceX Falcon 9 rocket with a Crew Dragon spacecraft and four private astronauts launches from pad 39A at the Kennedy Space Center on April 8, 2022 in Cape Canaveral, Florida. The Axiom Space Ax-1 commercial mission is commanded by former NASA astronaut Michael LÃ³pez-AlegrÃ­a. Paying passengers Larry Connor, Mark Pathy, and Eytan Stibbe are also on board for the 10-day mission to the International Space Station (ISS). The Ax-1 mission is the first all-private mission to the ISS. (Photo by Paul Hennessy/Anadolu Agency via Getty Images)

(CNN) — It didn’t take long for the crew of the first all-private mission to the International Space Station to experience the unique dependency that US astronauts and Russian cosmonauts share in orbit.

“We had one day when the toilet was down for a couple hours,” Larry Connor, the pilot of Axiom Space’s AX-1 mission, told CNN. “The Russians were very cordial, very accommodating. We operate as one team up there and they said, ‘Hey, come on over and use ours.”

In addition to sharing a toilet, the AX-1 crew also shared two family-style dinners with everyone who was on board the space station during their 15-day stay — three Russian cosmonauts, three NASA astronauts, and a German astronaut with the European Space Agency.

Connor describes the cosmonauts as “gracious hosts,” inviting the AX-1 crew to the Russian segment of the space station for the “equivalent of juice boxes and a little bit of dessert.” But Connor says at no point did the war in Ukraine ever come up.

“My personal view is I totally support Ukraine, the Ukrainian people, and their right to exist as a sovereign nation. Period,” Connor said. “But as a private astronaut, part of an international community where it’s vital for all of our safety and well-being on the International Space Station, we have to, in my view, respect that, honor that and from a practical safety standpoint, put those differences aside, severe as they may be, and be one cohesive unit.”

‘We were not on a tourist trip’

Connor spent more than 100 hours training for the AX-1 research mission, which included complex medical experiments in microgravity on behalf of the Mayo and Cleveland Clinic.

“Basically, it was my full-time job for eight months leading up to the mission,” Connor said. “We were not on a tourist trip. We were on a serious mission with, hopefully, important research and educational outcomes.”

But despite the exhaustive training at NASA’s Johnson Space Center and SpaceX’s headquarters in Hawthorne, California, Connor says conducting scientific experiments while floating around weightless was a “humbling experience.”

“If it were not for the NASA’s Crew-3 astronauts, and their phenomenal help, we would never – underscore the word never – have been able to accomplish all of our objectives,” Connor said. “We underestimated the time on some of the projects. We had one project early on that we thought was two-and-a-half hours, take five hours.”

“When we crossed the hatch, we went into a real sprint — 14 hour days, basically from 7AM until 8 or 9 at night for the first five or six days, and then it backed off a little bit to 12 hour days,” Connor said. “It was rigorous and challenging.”

The AX-1 mission was organized by the Houston-based startup Axiom Space, which is working to build the world’s first commercial space station. But Elon Musk’s SpaceX supplied the crew’s transportation to and from the International Space Station.

Connor, an Ohio-based real estate magnate who paid an undisclosed sum to secure a spot on the AX-1 crew, launched from the Kennedy Space Center on top of a SpaceX Falcon 9 rocket along with Michael López-Alegría, a former NASA astronaut-turned-Axiom employee who commanded the mission; and two other paying customers: Israeli businessman Eytan Stibbe; Canadian investor Mark Pathy.

“The launch was great, but the re-entry was even better. You’re coming down hill and you’re free falling and you can tell how fast you’re going, but it’s very controlled,” Connor said. “There’s some G-loading. You get a sense of rotation. It’s really exhilarating.”

Connor says he’s “still reacclimating to Earth” after his SpaceX Crew Dragon capsule splashed down in the Atlantic Ocean on Monday.

“This feels like the day after a big championship football game, in terms of the aches and pains,” says Connor.

When Connor asked his commander, a veteran of five space flights, about the body aches, Connor says Michael López-Alegría replied, “It’s gravity, buddy. Get used to it.”

“I’m happy to be back on Earth,” Connor said. “But it was an extraordinary mission.”