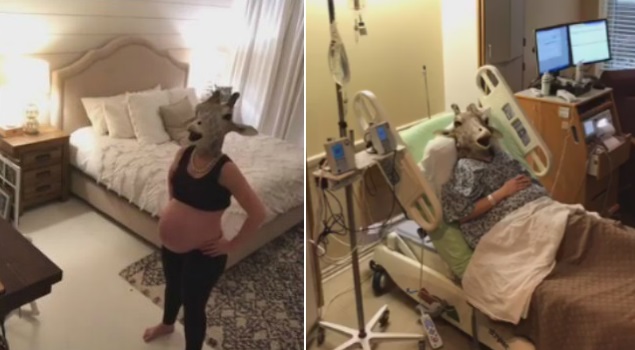 (WSVN) - A pregnant woman in South Carolina “broke the internet” when she mocked April the giraffe’s seemingly never-ending pregnancy watch with a viral video of her own. Now it looks as if she may beat April to the punch.

Erin Dietrich parodied the giraffe’s live feed Sunday, walking around her bedroom while wearing a giraffe mask. Her video quickly spread, getting over 30 million views on Facebook.

Dietrich went into labor Wednesday, and decided to go live on the social media site once more, still donning the giraffe mask – this time, from her hospital bed.

It’s been several weeks since people first tuned into Animal Adventure Park’s live feed of April, a 15-year-old giraffe who was expected to give birth “at any moment.” But it seems April’s calf is quite content staying in her belly, with thousands watching the live feed from the upstate New York wildlife park.

Dietrich is one of those thousands who has been glued to the feed, which mainly consists of the giraffe eating and walking around her pen. She said her friends had been making fun of her giraffe watch obsession, so she decided to order a mask online and make a video of her own.

“Clearly we live an exciting life over here in the Dietrich household,” she joked on Facebook when she posted the first video.

But Dietrich said her video going viral took her by surprise.