Pope nixes procession but plans Mass for Congolese on July 3 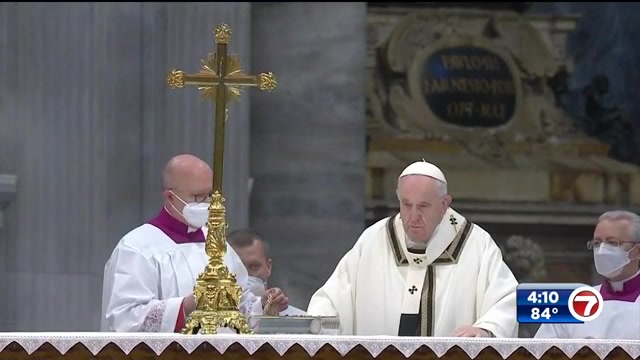 ROME (AP) — Pope Francis canceled his participation in a religious procession this weekend due to ongoing knee pain, but said Monday he hoped to celebrate a special Mass for Italy’s Congolese community after he had to postpone his planned visit to Africa.

“We’ll bring Kinshasa to St. Peter’s,” Francis told a group of missionary priests, the White Fathers, during an audience Monday.

He said he was saddened to have to cancel his planned July 2-7 pilgrimage to Congo and South Sudan but said he hoped to make it up to Rome’s sizeable Congolese community with a Mass at the Vatican on July 3.

“At my age it’s not so easy to go on mission,” he told the priests, who have long ministered in Africa.

Francis has canceled his participation in several events this year due to the strained ligaments in his right knee that have made walking and standing difficult. He has been using a wheelchair for over a month and the Vatican last week announced he had to cancel his planned trip to Congo and South Sudan in order not to jeopardize his recovery.

On Monday, the Vatican announced that Francis would also have to bow out of Sunday’s Corpus Domini procession, a centuries-old annual profession of the Catholic faith during which the Eucharist is exhibited publicly.

Francis has apologized to the governments and faithful in Congo and South Sudan, and on Sunday asked for prayers “so that with the help of God and medical treatment I can come to you as soon as possible.”

The Vatican hasn’t specified the exact nature of the problem or what treatments Francis is receiving, but he has said he has received some injections and friends say he is doing physical therapy daily.