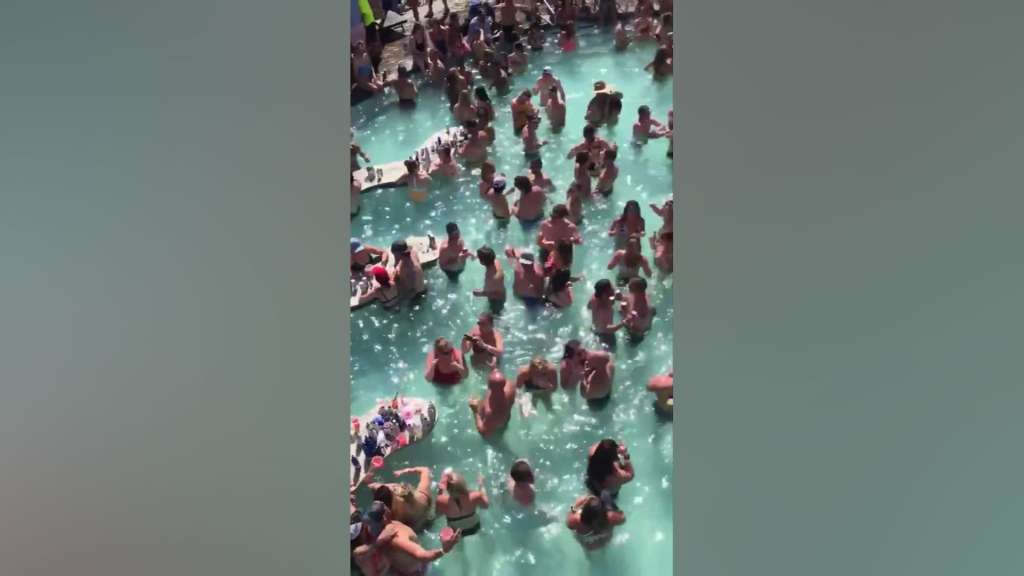 (CNN) — A person who partied in the Lake of the Ozarks, Missouri, area on Memorial Day weekend has tested positive for coronavirus — and was possibly infectious over the holiday weekend.

The Boone County resident visited multiple bars on May 24 and 25, according to the Camden County Health Department. They “developed illness” on Sunday and were possibly infectious before then.

Video from that weekend shows partiers crowded together in a pool at Backwater Jacks Bar and Grill in Osage Beach on Saturday, according to Scott Pasmore, an anchor for CNN affiliate KTVK, who shot the footage.

The partier went to Backwater Jacks between approximately 1 p.m. and 5 p.m. local time and again shortly before 10 p.m. local, according to health officials.

The person — who was not identified by officials — also went to Shady Gators and Lazy Gators and Buffalo Wild Wings, officials said.

About 12,700 people in Missouri have tested positive for coronavirus and about 730 have died from Covid-19 infection, according to state data.

There have been no cases reported in Camden County residents this week, officials said.

Camden County health officials urged those who were in the area to monitor for symptoms. They released a timeline of the infected person’s movements, including a list of the bars they visited:

As part of Missouri’s reopening plan announced earlier this month, state officials said restaurants may offer dining-in services but must adhere to social distancing and other precautionary public health measures. The gathering that weekend violated social distancing measures intended to limit the spread of Covid-19. Backwater Jacks maintains that no laws were broken

The bar posted on Facebook that this was its launch of summer party called “Zero Ducks Given Pool Party” — the third annual event. They advertised several DJs and bands performing throughout the event.

“The venue has worked with and taken the advice of government officials and management teams and will be following social distancing guidelines. Extra precautions and safety measures will be taken to provide a safe environment for you to enjoy the event,” the bar said.

Medical staff was hired for the event, according to the bar, and anyone with a temperature of above 100.4 was denied access, they said. Hand sanitizer was also provided.

Coronavirus is not likely to spread in water, the CDC says, but it does spread through people in close proximity. Staying at least 6 feet from others is particularly important at pools or beaches because masks are impractical in water.

The Lake of the Ozarks expected a large turnout that weekend after getting a late start to the season because of the pandemic, according to CNN affiliate KTVI.

“It’s supposed to be one of the biggest Memorial Day weekends we’ve seen at the lake here in years,” Bill Morgan, manager of Robins Resort in Lake of the Ozarks, told KTVI that week.

Adam Kirk lives in Osage Beach, Missouri, and shot a time-lapse drone video that shows the amount of boat traffic on the Lake of the Ozarks that Saturday at 4:30 p.m.

“It definitely seems like more (traffic) than last year,” he said. “It seems like everyone is having the same idea, to come to the lake to enjoy summer, because you can social distance at the same time.”