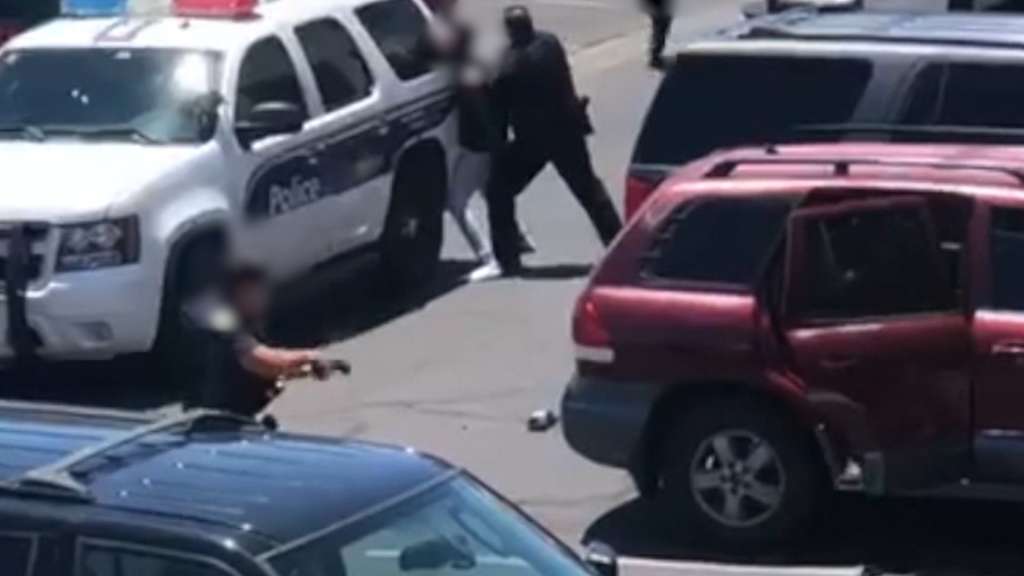 Courtesy: KNXV via CNN - Parents: Police pulled guns on them after 4-year-old daughter took a doll from a store in Phoenix

(CNN) — A Phoenix couple is seeking $10 million from the city after a video showed police officers drawing a gun on them after their 4-year-old daughter allegedly stole a doll from a Family Dollar store.

Dravon Ames and fiancee Iesha Harper told CNN they didn’t notice when their daughter walked out with a Barbie from the store last month. They’ve filed a notice of claim against the city for $10 million, which serves as a precursor to a lawsuit.

Soon after they left the store, Ames said the couple pulled into an apartment complex to drop their daughter off at a babysitter. Then an officer began banging against their window, yelling and threatening to kill them.

“Our hands are up, we’re just trying not to get shot, trying to stay calm,” Ames said. “He had a gun drawn.”

Officer did not identify himself, family says

Ames said there were no sirens or lights to indicate that they were being pulled over beforehand and the officer who was pointing a gun at them did not immediately identify himself as an officer.

The incident took place on May 29, the family said. Police said they were made aware of video on June 11.

In the 12-minute blurred-out video posted on the department’s Facebook page, one officer can be seen handcuffing Ames, first on the ground and then against a police car. The officer kicks Ames and can be heard yelling multiple times, “When I tell you to do something, you f****** do it.”

Another officer appears to be pulling a gun on the passenger side of the couple’s vehicle before Harper exits the car, holding a small child, with a second child by her side.

An officer is seen attempting to yank the child from her arms before a bystander offers to take her children.

Harper, who was five months pregnant at the time, said she was terrified.

“I I really thought he was gonna shoot me in front of the kids,” she told CNN by phone Friday. She chose to give her two children to a “complete stranger because I didn’t trust the police to have her.”

During the video, officers can be heard telling her to get her hands up.

The city has 60 days to respond to the notice of claim and the next step is filing a lawsuit, said Thomas Horne, the family’s attorney. In his notice, he says the officers committed battery and unlawful imprisonment, among others, and both the police department and city are liable because of “inadequate policies, training, supervision.”

The department is investigating

Authorities said the incident is under investigation.

“The Phoenix Police Department takes all allegations of misconduct seriously and for this reason, this incident is currently being investigated by the Professional Standards Bureau,” the department said.

It is not clear who recorded the video or what transpired beforehand. There is no body cam footage of the incident, Phoenix Police Department Sgt. Tommy Thompson told CNN.

He told CNN affiliate KNXV that the officer who is seen sweeping Ames’ leg is now on a nonenforcement assignment. The police department has not named any of the officers involved.

Thompson also told the affiliate there was more to it than the claim of the stolen doll, but would not expound on it. The affiliate reported that police said there were other stolen items in the vehicle besides the doll.

While the family’s claim said the incident happened “on or about May 29,” the police statement said it was May 27.

In a video posted to the department’s Facebook page Friday, Phoenix Police Chief Jeri Williams said she was “disturbed by the language and the actions of our officer.”

“I assure you that this incident is not representative of the majority of Phoenix police officers who serve this city,” Williams said.

The chief said she began an “immediate internal investigation” as soon as she became aware of the video.

“I wish investigations could be handled instantly, but each one takes time and deserves the due diligence before we can discuss specific details,” she said.

Harper and Ames say both their daughters are traumatized, and their 4-year-old has been having nightmares and wetting the bed since the incident.

Their second daughter, just a year old, suffered “dead arm,” after the officer tried to yank her from her mother.

The couple is still shaken up too. Ames said he was worried about his children and felt helpless during the incident.

“I’m supposed to protect my family, I’m cuffed up … I’m hearing my daughter screaming, my fiancée being handled. It broke me down so much,” he said.

Reverend Jarrett Maupin, a spokesman for the family, told CNN Ames is lucky to be alive.

“He was totally compliant, submissive even still not enough to save him from the ferocious violence of the police department,” Maupin said.

The couple says they were both released shortly after the arrest and were not charged.