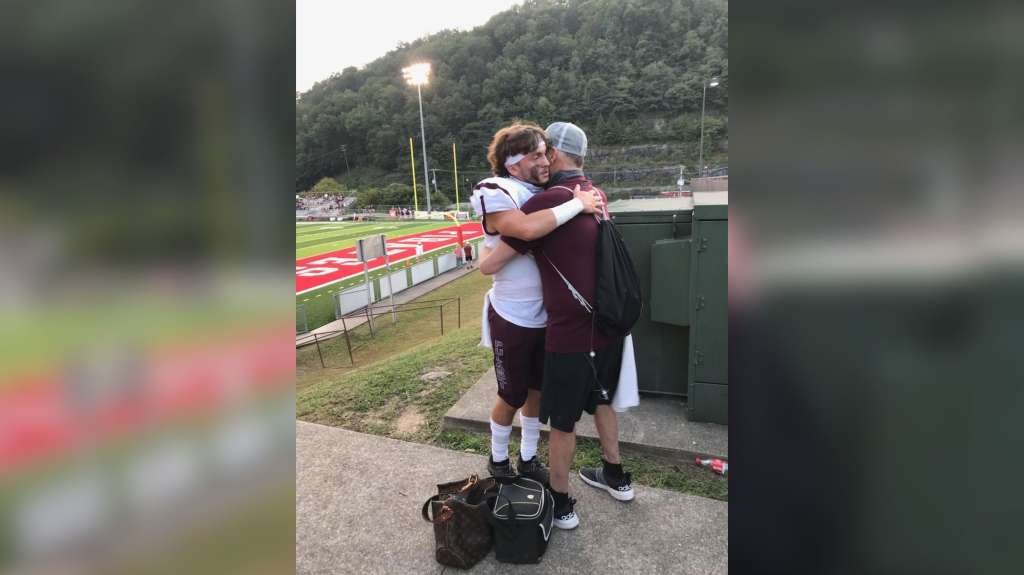 (CNN) — For a father and son, a hug before the first game of football season is a special moment. For Scott and Cade Sullivan, it was the moment of a lifetime.

Scott Sullivan of Somerset, Kentucky, was diagnosed with a rare form of cancer after being admitted to the hospital for abnormal lab results in early August. Sullivan was diagnosed leptomeningeal carcinomatosis, a complication of cancer in which the disease spreads to the membranes surrounding the brain and spinal cord. According to the National Institutes of Health, even with treatment, overall survival is approximately two to four months.

The doctors gave the 50-year-old Sullivan only a few weeks to live and discharged him to hospice care.

As he continued to battle his illness at home, all he wanted was to live long enough see his son’s first football game of his sophomore year at Pulaski County High School. So, he asked his nurse, Jerree Humphrey of Hospice of Lake Cumberland, if it would be possible.

Sullivan and Humphrey developed a friendship quickly — both had children around the same age who played sports at rival schools. But she could not recommend his request. The first game of the season was an away game in Belfry, a three-and-a-half hour drive away, and not suitable for a hospice patient.

“I thought you know you’re talking seven or eight hours in the car and I said I don’t know how safe that would be or how realistic,” said Humphrey.

But the nurse figured out a way to make it happen. She reached out to a nearby airport and within days a local dentist, Dr. Denny Brummett, offered to fly Sullivan to the game on his personal plane.

Sullivan was overcome with emotion by the news.

“Words could not be put into sentences or phrases to describe how I felt at that time,” he said. “I was just so happy to see my son.”

On September 11, Humphrey, Brummett, Sullivan and Sullivan’s girlfriend boarded the plane for game day. Instead of sitting in the stands, they sat on a hill away from all the fans as an extra precaution.

When Cade Sullivan saw his father, he ran up the hill and hugged him with all his might. The elder Sullivan says it was a magical moment because they created a memory that his son will always be able to remember when he’s gone.

“You could just not help but cry,” Humphrey said. “He just embraced him so hard and was just so thankful for him to be there.”

Sullivan hopes he will have the chance to make it to his son’s next football game on Saturday.