More than 100 arrested or missing in Cuba after widespread protests, say activists 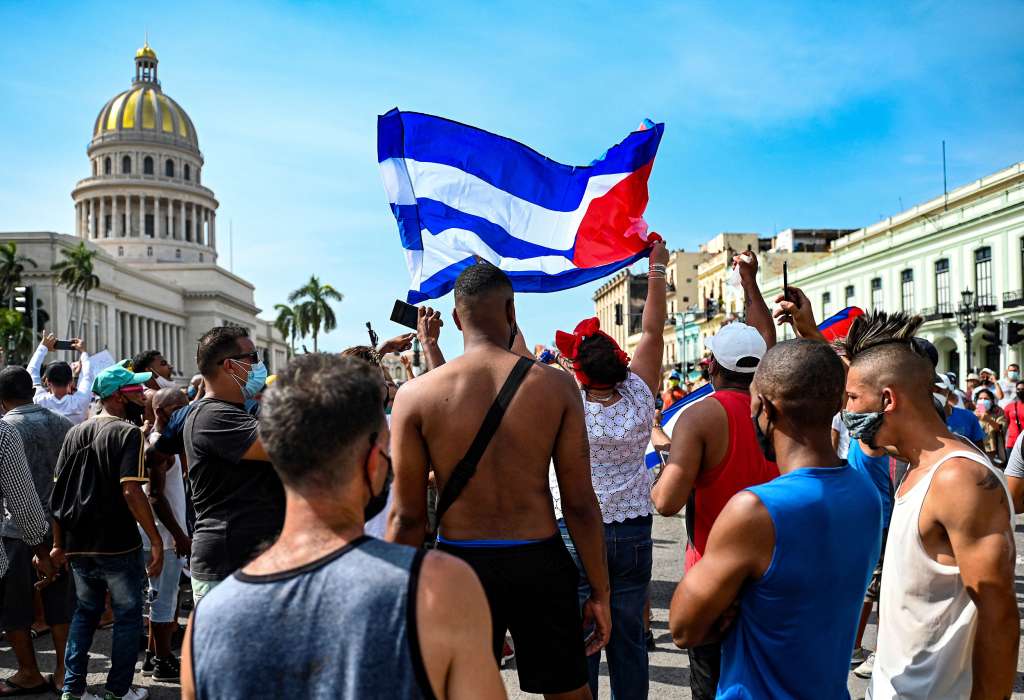 TOPSHOT - Cubans are seen outside Havana's Capitol during a demonstration against the government of Cuban President Miguel Diaz-Canel in Havana, on July 11, 2021. - Thousands of Cubans took part in rare protests Sunday against the communist government, marching through a town chanting "Down with the dictatorship" and "We want liberty." (Photo by YAMIL LAGE / AFP) (Photo by YAMIL LAGE/AFP via Getty Images)

(CNN) — Anti-government activists in Cuba say that more than 100 people have been arrested or are missing on the island following widespread protests on Sunday.

The Movimiento San Isidro, which advocates for greater artistic expression in Cuba, published a list of activists that it said were believed to have been detained by authorities.

Among the detainees is journalist Camila Acosta, according to Spain’s Foreign Minister Jose Manuel Albares, who called for her release.

On Sunday, CNN journalists witnessed multiple people being forcibly arrested and thrown in the back of vans at protests in Havana. Videos of the protest showed demonstrators turning over a police car and throwing rocks at officers.

The Cuban government has not said how many people were arrested or injured in the disturbances.

These are the largest protests on the island in decades, as Cubans complained about a lack of food and medicine as the country undergoes a grave economic crisis aggravated by the Covid-19 pandemic and US sanctions.

In San Antonio de los Banos, a city of about 46,000 people to the west of Havana, hundreds of Cubans took to the streets on Sunday, fed up after nearly a week of electricity cuts during the sweltering July heat.

“Everyone was in the streets,” one resident, who did not want to be named, told CNN. “They have gone six days with only 12 hours of power each day. That was one of the things that blew this up.”

In a nationally televised address later on Sunday, President Díaz-Canel blamed US trade sanctions for the communist-run island’s economic woes.

Díaz-Canel also urged his supporters to physically confront the protestors. “The order to combat has been given,” he said at the end of his appearance, “Revolutionaries need to be on the streets.”

Acosta, the detained journalist, writes for the ABC newspaper in Madrid, the Spanish capital.

ABC reported that she was arrested on Monday morning in Havana as she left her home. Later, Cuban security agents searched her home and took her computer, it said. Hours earlier, she had reported on anti-government demonstrations in the Cuban capital on Sunday.

This is not the first time that Acosta has had a run-in with Cuban authorities for doing her job as a reporter, ABC said.

The newspaper said that her arrest is “completely unacceptable.” It also called for Acosta’s “immediate release and the return of all professional material taken from her home,” as well as the dropping of the charges against her for alleged crimes against Cuban state security.

An editor at ABC confirmed to CNN that Acosta is a Cuban national and had been working at the paper for around six months.

Spain’s Foreign Minister Albares called for her immediate release in a tweet, saying that, “Spain defends the right to free and peaceful demonstrations and asks the Cuban authorities to respect that. We defend human rights.”

US President Joe Biden has warned the Cuban government not to crack down on its newly defiant citizens. But on Monday, at another lengthy televised government meeting, Cuban President Díaz-Canel said the protesters were criminals.

Cuban government officials on Monday said there had been no more protests as they enacted an internet blackout. This prevented Cubans from sharing images of demonstrations that had gathered momentum behind the protests in the first place.

Meanwhile, US-Cuban relations are at their lowest point in years. The Trump administration enacted some of the toughest economic measures against Cuba in decades, and so far, the Biden administration seems reluctant to lift them.

The already struggling Cuban economy has been hit hard as tourism and good imports have dropped steeply during the pandemic. On Sunday, Cuban health officials also reported a record single-day increase for new Covid-19 cases and deaths.

On Monday, Mexican President Andrés Manuel López Obrador joined Cuban officials in calling for the US to suspend the Cuba trade embargo as a humanitarian gesture. “No country in the world should be fenced in, blockaded — that’s the opposite of human rights,” he said.

When asked why Biden had not yet reversed Trump’s policies towards Cuba, White House Press Secretary Jen Psaki said Monday the US had continued to provide humanitarian assistance and medical supplies, but added, “I have nothing to preview for you in terms of a change of policy.”

And US Secretary of State Tony Blinken has pushed back against criticism from the Cuban government, saying “it would be a grievous mistake for the Cuban regime to interpret what is happening in dozens of towns and cities across the island as the result or product of anything the United States has done.”

“That is what we are hearing and seeing in Cuba, and that is a reflection of the Cuban people, not of the United States or any other outside actor,” Blinken said.