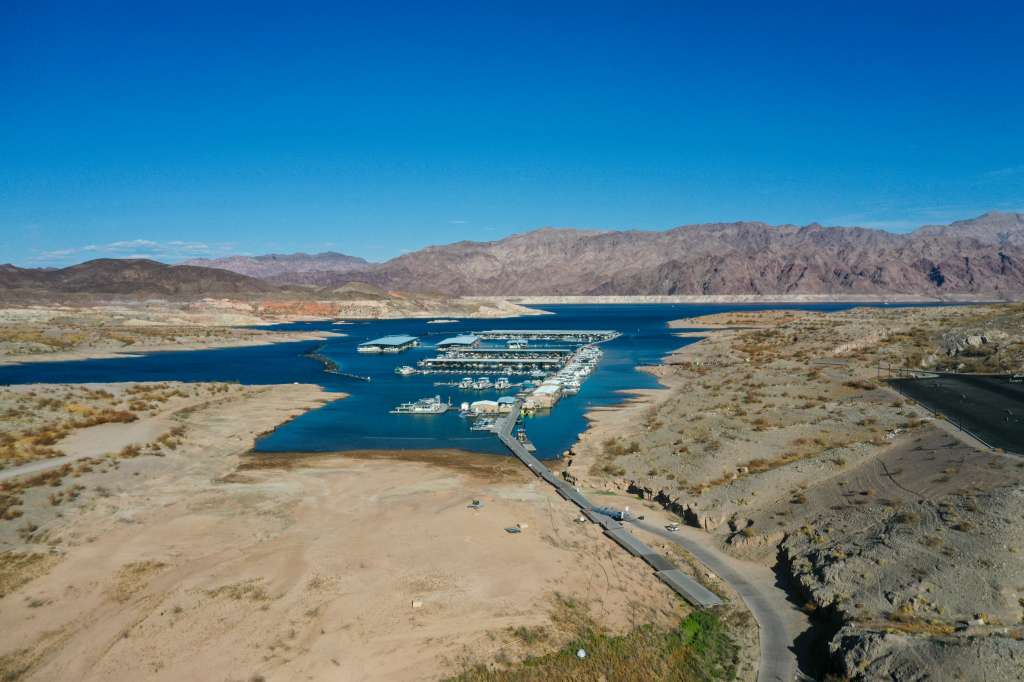 Lake Mead, NV - June 29: An aerial view of the droughts effects at the Callville Bay Resort & Marina, Lake Mead. Lake Mead is at its lowest level in history since it was filled 85 years ago. The ongoing drought has made a severe impact on Lake Mead and a milestone in the Colorado River's crisis. High temperatures, increased contractual demands for water and diminishing supply are shrinking the flow into Lake Mead. Lake Mead is the largest reservoir in the U.S., stretching 112 miles long, a shoreline of 759 miles, a total capacity of 28,255,000 acre-feet, and a maximum depth of 532 feet. (Allen J. Schaben / Los Angeles Times via Getty Images)

(CNN) — More human remains were found at Lake Mead over the weekend, less than a week after a body in a barrel was discovered at the reservoir.

National Park Service rangers responded to a call on Saturday afternoon that reported the remains in Callville Bay. The Clark County Medical Examiner is assisting with determining the cause of death, according to NPS, which said there is “no further information is available at this time.”

It was the second set of human remains found at Lake Mead, the country’s largest reservoir, as water levels plunge. The first body, discovered on May 1, was likely a murder victim who died from a gunshot wound “some time in the mid ’70s to early ’80s, based on clothing and footwear the victim was found with,” according to a new released from the Las Vegas Metropolitan Police.

“The lake has drained dramatically over the last 15 years,” Las Vegas Metropolitan Police Homicide Lieutenant Ray Spencer said at the time, noting “it’s likely that we will find additional bodies that have been dumped in Lake Mead” as the water level drops more.

Around 40 million people in the West rely on water from the Colorado River and its two largest reservoirs — Lake Mead and Lake Power — where levels have fallen at an alarming rate over the past few years, amid a climate change-fueled megadrought.

As of Monday, Lake Mead’s water level was around 1,052 feet above sea level — roughly 162 feet below its 2000 level, when it was last considered full. It’s the lowest level on record for the reservoir since it was filled in the 1930s.

The lake’s low water level exposed one of the reservoir’s original water intake valves in April for the first time. The valve had been in service since 1971, but it can no longer draw water, according to the Southern Nevada Water Authority. That agency is responsible for managing water resources for 2.2 million people in southern Nevada, including Las Vegas.

“We have never taken this step before, but the potential risk on the horizon demands prompt action,” Assistant Secretary of Water and Science Tanya Trujillo told reporters last week. “We need to work together to stabilize the reservoir before we face a larger crisis.”