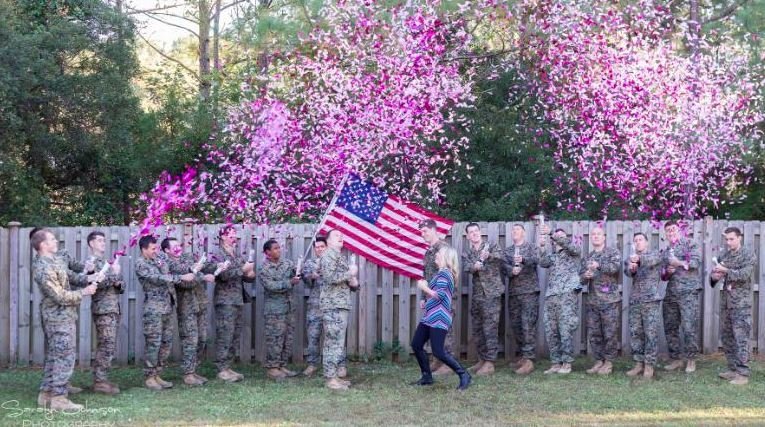 She chose Veterans Day to reveal the gender of her baby, whose father died in a military plane crash in Mississippi in July 2017.

“I wanted to honor her daddy on this special day,” Lohrey told CNN. “Veterans Day is a big deal for us every year, but this year it’s extra special.”

Lohrey married Navy corpsman Ryan Lohrey in June 2017, one month before he died. They met three years ago when Ryan was training in a hospital in Michigan where Lohrey worked.

The two had discussed having children and wanted to start trying right after they were married, Lohrey says. A few weeks after Ryan’s death, Lohrey found out she was expecting their child.

“The week after the funeral was when we found out we were having a baby,” Lohrey said. “I knew Ryan wouldn’t leave me alone. He wanted me to have a piece of him forever.”

So she gathered a group of Marine and Navy corpsmen who’d served with Ryan to help her with the gender reveal.

At the photo shoot, “There was a lot of crying, a lot of yelling and a lot of hugging,” Johnson said.

The baby girl will be named Ryan Jo Lohrey, using her father’s first name and her mother’s middle name. The baby is due March 2018.

Lohrey says she’ll tell her daughter how supportive, loving, happy-go-lucky and fun her father was, and that he’d do anything for his family and his country.

Friends set up a GoFundMe to help the expecting mom and her baby girl.