Michelin and GM are working on a puncture-proof airless tire 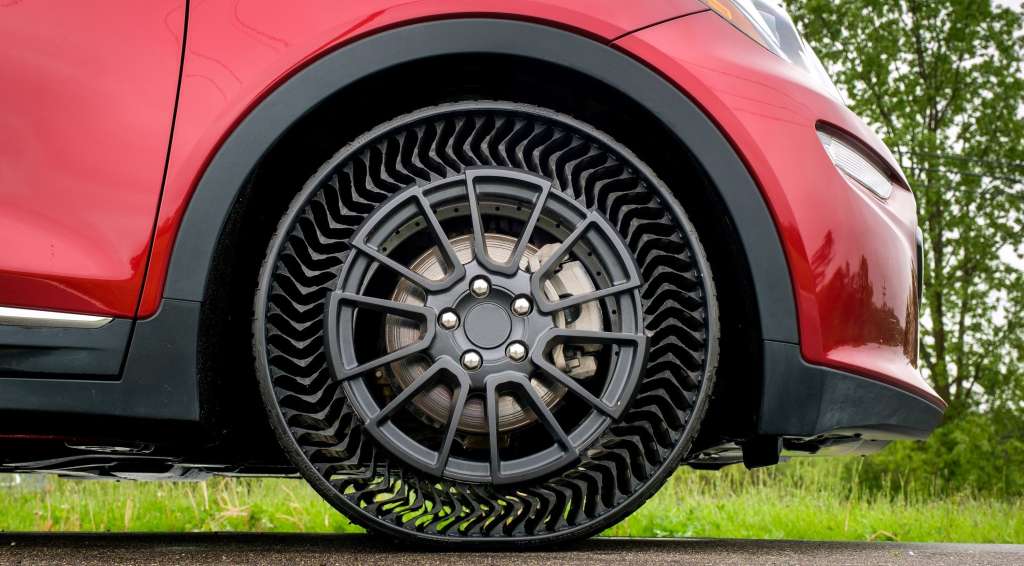 The Michelin Uptis Prototype is tested on a Chevrolet Bolt.

(CNN) — Michelin and General Motors have teamed up to literally reinvent the wheel.

The two companies have rolled out a new airless wheel prototype to replace traditional tires that are filled with air and prone to puncturing.

It’s called the Uptis Prototype, which stands for “Unique Puncture-proof Tire System.” GM and Michelin unveiled the new tire at an event Tuesday in Montreal.

The prototype looks like an old-fashioned tire, but has treads in the middle and no sidewalls.

GM claims the tire is both better for drivers and the environment.

For drivers, the new tire eliminates blowouts and flat tires.

GM said the tire is environmentally friendly because it uses fewer raw materials. And because the tires last longer than traditional ones, GM and Michelin’s new invention could reduce the number of tires people throw away. Michelin said that 200 million tires are thrown out every year because of damage, such as blowouts and irregular wear caused by improper tire pressure.

GM has a zero-emissions pledge as part of the company’s plan to radically change its business in preparation for the future of transportation.

“Uptis is an ideal fit for propelling the automotive industry into the future, and a great example of how our customers benefit when we collaborate and innovate with our supplier partners,” said Steve Kiefer, GM’s head of global purchasing and supply chain, in a release.

It will begin testing on public roads later this year on a fleet of Chevrolet Bolt vehicles. Michelin hopes the new tire will be available for purchase beginning in 2024.

Other companies are also making radical changes to the wheel. Earlier this year, Goodyear showed off a new airliess tire called the Aero, which would double as a propeller. Its bladed spokes act as a fan, allowing the wheels to flip upward and help propel a car into the air.

In 2016, Goodyear released concepts for spherical tires that would allow cars to move in any direction.