Mayorkas: About 4,000 migrants in Del Rio have been expelled under Covid-19 public health rule 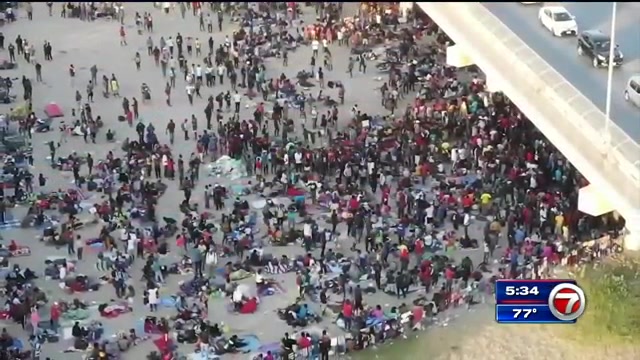 (CNN) — About 4,000 migrants apprehended by US Customs and Border Protection in Del Rio, Texas, over the last weeks have been expelled under a public health authority, known as Title 42, and 10,000 to 12,000 migrants have been released into the United States, Homeland Security Secretary Alejandro Mayorkas said Sunday.

“That is a public health authority. It is not an immigration policy. It is exercised as the CDC, the Centers for Disease Control (and Prevention), has ordered, in light of the arc of the pandemic,” Mayorkas told CNN’s Jake Tapper on “State of the Union.” “The public has to remember that we are in the midst of a pandemic. The Delta variant caused a setback. … This is a public health imperative to protect migrants themselves, local communities, our personnel and the American public.”

He also said there are about 13,000 migrants who arrived in Del Rio in that same timeframe that have been put in immigration proceedings to determine whether they can remain in the US or be removed. Approximately 10,000 to 12,000 migrants who were detained in Del Rio, Texas in recent weeks have also been released into the United States, Mayorkas said during a separate interview with Fox News.

It’s the latest update on the repatriation of migrants who amassed in Del Rio. The Department of Homeland Security has been conducting regular repatriation flights to Haiti.

In March 2020, the Trump administration invoked the public health order, Title 42, that allowed border officials to turn back migrants encountered at the US-Mexico border, a move that in effect sealed off the border. Public health officials, at the time, suspected political motivations behind the decision. The Biden administration has relied on the public health order to turn away adults and families apprehended at the US southern border. Unaccompanied children remain exempt from the policy.

Pressed on Democrats’ criticism of the removal of Haitian migrants and continued use of the policy, Mayorkas defended the Biden administration’s immigration actions.

The secretary also punted to the CDC when asked about the public health authority that allows the administration to swiftly remove migrant families and adults encountered at the border.

“If they determine that the public health imperative no longer exists and Title 42, which is a statute, a law, need not be applied to protect people, then it will not be applied any longer and we will proceed accordingly,” Mayorkas said.