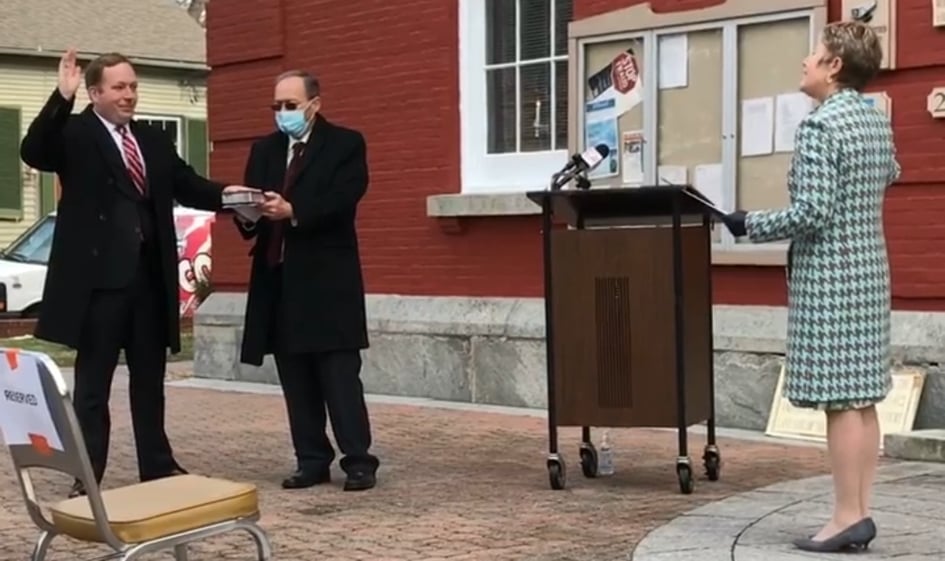 Andrew Bradshaw, the 32-year-old mayor of Cambridge on Maryland’s Eastern Shore, is accused of posting nude photos of a woman he was no longer in a romantic relationship with.

Bradshaw posted the photos using multiple Reddit accounts he created using variations of the woman’s name and birthdate, according to a news release from the Office of the State Prosecutor. The photos were captioned with racial slurs and sexually explicit language and were posted in April and May, authorities said.

The woman contacted authorities in May after learning that the photos were posted on Reddit. She told authorities that she had sent the photos only to Bradshaw while they were in an intimate relationship and she didn’t give him permission to redistribute them, the document states. She said they were no longer in a relationship.

The accounts that posted the photos were linked to an IP address that provided internet service to a Cambridge home owned by Bradshaw, the document states.

The charging document alleges that Bradshaw disseminated the images without the woman’s knowledge or consent and with the intent to harm her. Maryland law prohibits the nonconsensual distribution of a private visual representation of another which exposes their intimate body parts or displays them engaged in sexual activity, with the intent to harm, harass, intimidate, threaten or coerce the person depicted.

If convicted, Bradshaw could face a maximum penalty of two years’ incarceration and a $5,000 fine for each count.

A biography on the website of the city of about 13,000 notes that Bradshaw, who grew up in the Cambridge area, was the youngest mayor in the city’s history when he took office in January.

City officials declined to comment on the charges, but a statement on the city’s website said they’re “aware of the matter involving the Mayor” and would cooperate with authorities. The statement notes that the city’s business isn’t affected since the city manager serves as the city’s chief executive and administrative branch head.

“It’s appalling behavior for anyone, especially someone vested with public responsibility,” State Prosecutor Charlton Howard III said by telephone. Even if the acts don’t fall within official duties it contributes to the public’s lack of faith in our leaders and institutions, he said.

“People in romantic relationships exchange private confidences, messages and private images and they do it under an assumption, sometimes stated or understood, that they will be retained privately,” Howard said. “Distribution can be exceptionally devastating. … The pervasive depth and breath of the internet makes these cases exceptionally egregious.”