‘Mash potatoes, not your head’ billboard in Las Vegas gets noticed 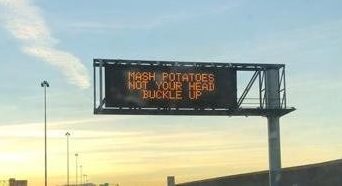 A billboard in Las Vegas says "Mash potatoes, not your head. Buckle up." Mandatory Credit: KVVU

LAS VEGAS (KVVU) — A new traffic safety message displaying on billboards across the Las Vegas Valley has become quite the topic of conversation.

The message, which is part of the revolving messages displayed by the Nevada Department of Transportation, reads, “Mash potatoes, not your head. Buckle up.”

While some on Twitter this month said the message does what it is likely intended to do, get your attention, others have called it “highly disturbing.”

NDOT spokeswoman Adrienne Packer says the signs are all along the U.S. 95.

In a statement, NDOT says that “creative and eye-catching digital sign messages are one way to deliver those reminders and engage the public on the importance of traffic safety.”

Nevada has had more fatalities on its roadways this year than in any year in at least the past decade – and we still have 52 days left in 2021. Reckless and careless driving that leads to lives lost is unacceptable and must stop. With over 90% of U.S. crashes caused in part by driver behavior, it is incumbent on all traffic safety partners to find effective ways to communicate driving safety reminders. Creative and eye-catching digital sign messages are one way to deliver those reminders and engage the public on the importance of traffic safety.

“We have a committee, it’s the digital messaging sign committee, and they meet before every year calendar year and the hammer out a calendar deciding what messaging they want we tried to do one campaign a month,” said Packer.

There are 18 members from around the state on the digital message sign committee. They meet quarterly to discuss and agree on what witty signs may appear next on those overhead freeway message boards.

After the committee was originally formed, NDOT and RTC invited the Nevada Department of Public safety’s Office of Traffic Safety” to join the team.

The public then selected the final winners including ones like “camp in the mountains, not the left lane” and “turn signals come free with vehicles — use them.”

“Having public participation is amazing. NDOT did an incredible job of facilitating that and we look forward to continue seeing those messages on our roadways, Packer said.

Expect those creative and sometimes blunt messages to be around through the long Thanksgiving weekend.