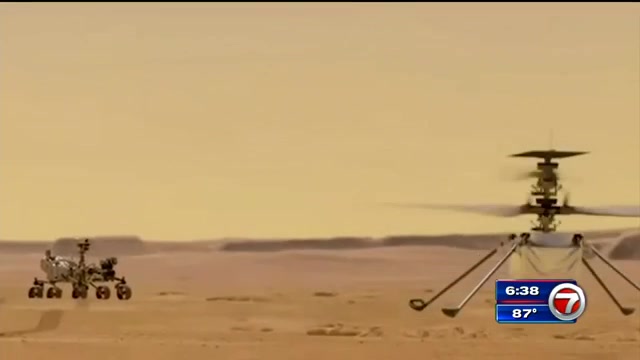 (CNN) — The Ingenuity helicopter has successfully flown for the third time on Mars in a week. This time, the helicopter logged a flight that was faster, further and bolder than the previous ones, according to NASA.

Data and imagery began streaming into the control room at NASA’s Jet Propulsion Laboratory in Pasadena, California, at 10:16 a.m. ET Sunday. The Perseverance rover captured an image of the helicopter in flight and shared it shortly after.

The helicopter climbed to the same altitude from its second flight — about 16 feet (5 meters) above the Martian surface — but this time it increased its speed.

The flight plan also included Ingenuity flying 164 feet (50 meters) north before returning to touch down at its landing site. All total, the helicopter was scheduled to fly for about 80 seconds, the longest yet, and a total distance of about 330 feet (100 meters).

“While that number may not seem like a lot, consider that we never moved laterally more than about two-pencil lengths when we flight-tested in the vacuum chamber here on Earth,” wrote Håvard Grip, Ingenuity Mars helicopter chief pilot at JPL, in an update.

“And while the 4 meters of lateral movement in Flight Two (2 meters out and then 2 meters back) was great, providing lots of terrific data, it was still only 4 meters. As such, Flight Three is a big step, one in which Ingenuity will begin to experience freedom in the sky.”

During its second flight on April 22, Ingenuity autonomously flew for almost 52 seconds, climbing 16 feet (4.9 meters) up through the Martian atmosphere. After a brief hover, it tilted at a 5-degree angle and moved sideways for 7 feet (2.1 meters). Before touching back down safely on the surface, Ingenuity hovered again to allow its color camera to capture the view of what it looks like to fly on Mars.

Ingenuity, a technology demonstration, still has another week to conduct two more flights before the 31-day mission comes to an end.

“Even though we are conducting our flight tests in a tenuous atmosphere over 180 million miles (290 million kilometers) from Earth, we model our methodical approach to experimental flight on the Wright brothers’ approach,” Grip wrote. “Our plan from Day One has been to prepare like crazy, fly, analyze the data (like crazy), and then plan for an even bolder test in the next flight.”