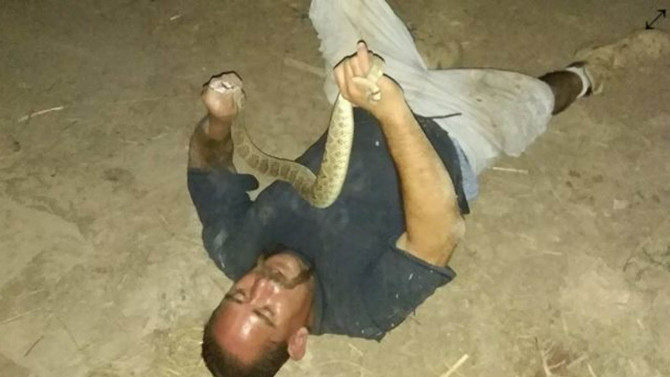 An Arizona man who was attempting to make a meal of a rattlesnake ended up becoming a meal himself.

According to Inside Edition, 48-year-old Victor Pratt was bitten twice by a rattlesnake he was attempting to barbecue during a family birthday party.

Pratt said he was showing off when he picked up the snake and pried its mouth open, according to Inside Edition.

“I wasn’t thinking,” Pratt said. “Instead of being a father, I was being a buddy.”

He was posing for photos while holding the serpent when he said his grasp slipped. That’s when the snake attacked him, biting him on his face and his neck.

Pratt said he played with snakes as a child and that he had eaten snake before. “I know to cook them and cut the heads off and stuff,” he said. “They taste like chicken. It’s not bad.”

Pratt’s son rushed him to a nearby hospital. He was then airlifted to Banner University Hospital in Phoenix, where doctors gave him 26 vials of anti-venom.

However, it appears Pratt learned his lesson and said he won’t picking up anymore snakes. “You have to be smart,” he said.