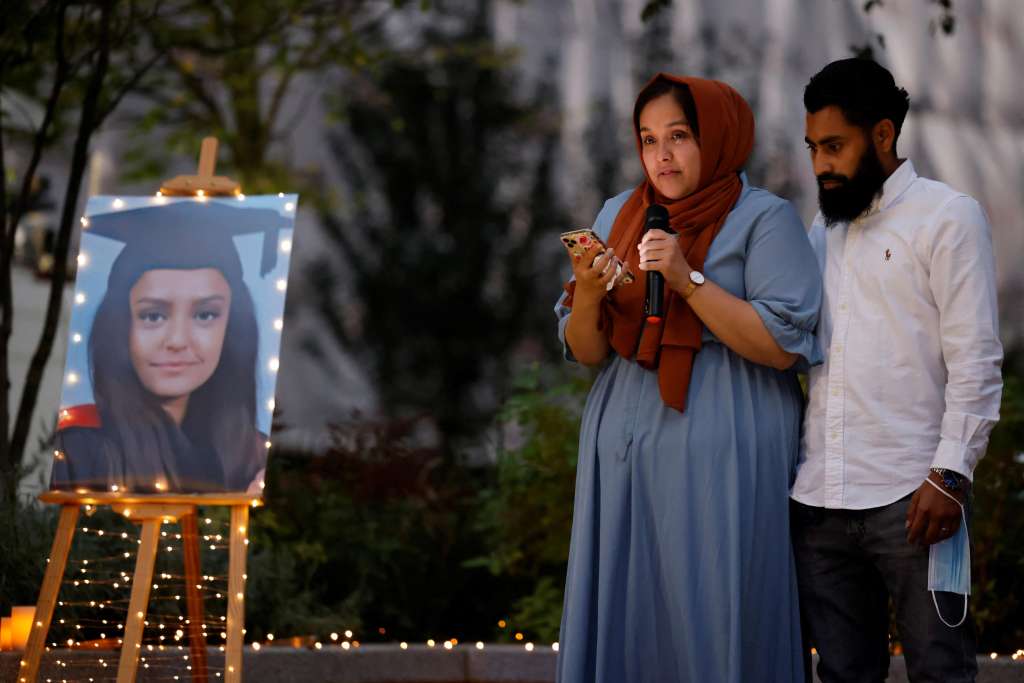 Sabina Nessa's sister pays tribute to her during a candlelight vigil in Kidbrooke on September 24. (Photo by Tolga Akmen/AFP/Getty Images)

(CNN) — The arrest of a man in connection with the murder of teacher Sabina Nessa is a “significant development” in the case, London’s Metropolitan Police said on Sunday.

Nessa, 28, was killed last Friday as she walked the short distance from her home in southeast London to a local pub where she was planning to meet friends. She never arrived.

Her body was discovered in a nearby park the following day, sparking a murder investigation.

“A 38-year-old man … was arrested on suspicion of murder at around 03:00hrs on Sunday, 26 September, at an address in East Sussex. He has been taken into police custody,” the Metropolitan Police said in a statement.

“Sabina’s family have been informed of this significant development and they continue to be supported by specialist officers,” Detective Chief Inspector Neil John said, according to the statement.

The Met previously arrested two other men — a 40-year-old and another 38-year-old — who have since been released under investigation.

A candlelight vigil was held on Friday evening in Kidbrooke, Nessa’s southeast London neighborhood, to pay tribute to her life and call for action to improve safety for women and girls, organizers said.

Catherine, the Duchess of Cambridge, also paid tribute to Nessa in a Twitter post on Friday, saying she was “saddened by the loss of another innocent young woman on our streets.”

“My thoughts are with Sabina’s family and friends, and all those who have been affected by this tragic event,” the royal added, before signing off the tweet on her shared official account with “C.”

Appearing at the vigil, Nessa’s sister Jebina Yasmin Islam, spoke of the pain of losing her sibling, describing her sister as a “brilliant” woman.

“We have lost an amazing sister far too early … Sabina loved her family. We have lost our sister, my parents lost their daughter and my girls have lost such a brilliant, loving, caring auntie,” Islam said.

“This feels like we’re stuck in a bad dream and we can’t get out of it,” she added.

Residents in Kidbrooke, a quiet London suburb around 20 minutes by train from central London, have been left shocked by the killing in their community.

“You feel it might have happened to you. It might happen anywhere,” Aliya Isaeva, a young mother who has lived in the area for about two years, told CNN on Friday night.

Manuela Colombini, who also attended the vigil and has lived in the area for about 15 years, said: “We want to feel safe. I have two young daughters and I don’t want them to grow up and think that they cannot go out in the streets or to a park,” she said.