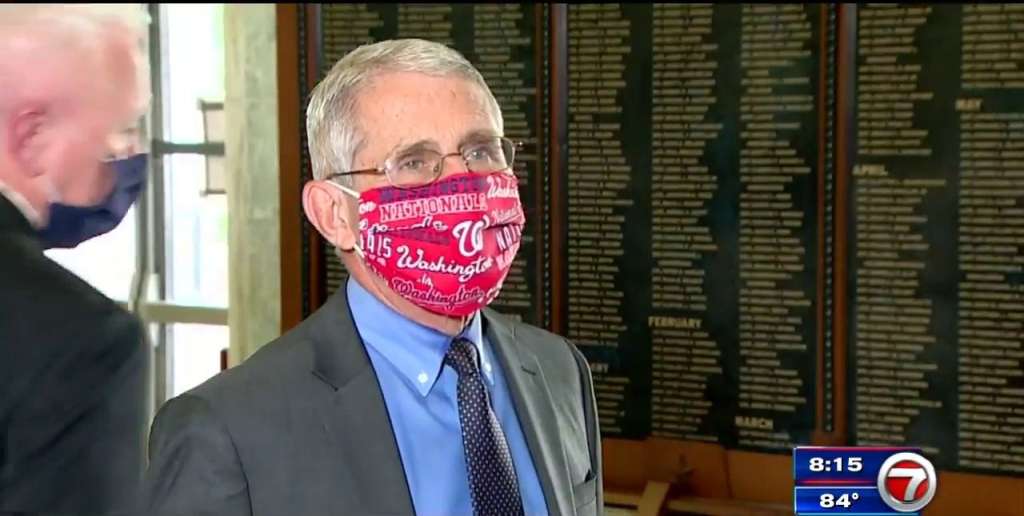 (CNN) — Local television stations owned by the Sinclair Broadcast Group are set to air a conspiracy theory over the weekend that suggests Dr. Anthony Fauci, the nation’s top expert on infectious diseases, was responsible for the creation of the coronavirus.

The baseless conspiracy theory is set to air on stations across the country in a segment during the program “America This Week” hosted by Eric Bolling. The show, which is posted online before it is broadcast over the weekend, is distributed to Sinclair Broadcast Group’s network of local television stations, one of the largest in the country. A survey by Pew Research Group earlier this year showed that local news was a vital source of information on the coronavirus for many Americans, and more trusted than the media overall.

In this week’s episode of the show, Bolling spoke with Judy Mikovits, the medical researcher featured in the discredited “Plandemic” video that went viral earlier this year and which was banned from platforms such as Facebook and YouTube. Throughout the segment, the on-screen graphic read, “DID DR. FAUCI CREATE COVID-19?”

Bolling also spoke with Mikovits’ attorney, Larry Klayman, a right-wing lawyer who also has a history of pushing misinformation and representing conspiracy theorists.

During the interview Mikovitz told Bolling that Fauci had over the past decade “manufactured” and shipped coronaviruses to Wuhan, China, which became the original epicenter of the current outbreak. Bolling noted that this was a “hefty claim,” but did not meaningfully challenge Mikovits and allowed her to continue making her case.

Klayman, who did not respond to a request for comment, also pushed conspiracy theories about the coronavirus. He said the “origins” of the virus were in the United States. Bolling didn’t meaningfully challenge Klayman either.

In the segment that immediately followed, Bolling spoke to Dr. Nicole Saphier, a Fox News medical contributor, to get her response to the claims from Mikovits and Klayman.

Bolling and Saphier agreed that it was, in Saphier’s words, “highly unlikely” that Fauci was behind the coronavirus. But they went on to theorize about other possible explanations for what had happened. Saphier said it was possible the virus was “man-made within a laboratory” and escaped. That claim has been rejected by experts who have studied the virus’ genetic sequence.

The segments were first reported on by Media Matters, a progressive media watchdog.

President Trump’s allies in right-wing media have sought to discredit Fauci in recent weeks. Earlier this month, Trump administration officials even went as far as to publicly attack Fauci.

The Sinclair Broadcast Group has drawn criticism in the past for pushing a conservative political worldview in its newscasts and programming decisions. A spokesperson for the company did not respond to multiple requests for comment on Friday.

But Bolling, a former Fox News host, told CNN Business in a series of text messages that he invited Mikovits onto his show to “question and challenge her beliefs.” Bolling also said he does not control the on-screen graphics that appear during his show.

“I did challenge her,” Bolling said, noting he called her claim “hefty.”

When pressed over whether calling a claim “hefty” constituted effectively challenging the conspiracy theory Mikovits pushed, Bolling said that he did believe he challenged her.

Bolling then told CNN Business that he was not aware of the viral “Plandemic” video Mikovits was featured in earlier this year, and said Saphier “was not originally booked on the show” and that he added her to “provide an opposing viewpoint.”

“I don’t know of any video she was in prior to or after appearing on my show. Frankly, I was shocked when she made the accusation,” Bolling said. “I asked our producers to add Saphier to the show for the express purpose of debunking the conspiracy theory. I believe viewers see that I did not and do not endorse her theory.”

When asked if he really was unaware that Mikovits had been in a viral video earlier in the year pushing misinformation about coronavirus, Bolling said he had been.

“I give you my word… this is the first I’ve heard of the video,” Bolling said. “And the very first time I heard of Dr Mikovitz was the morning of taping.”

But when asked whether, now that he was aware of the video, he had any second thoughts about airing the segment with Mikovits, Bolling replied, “I don’t second guess my producers and bookers.”

Bolling added, however, that he “certainly didn’t endorse her theory.”