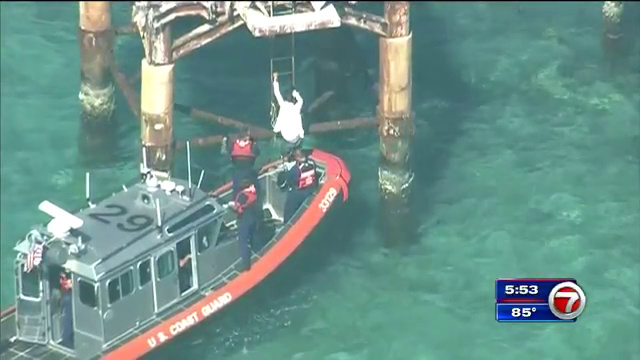 MIAMI (AP) — A group of migrants who fled Cuba in a homemade boat and climbed onto a 136-year-old lighthouse off the Florida Keys should be allowed to stay in the U.S., according to a federal lawsuit filed on their behalf.

The lawsuit filed Tuesday contends that the 109-foot American Shoal lighthouse is U.S. territory and should be considered the same as dry land. Under the “wet foot, dry foot” policy, Cubans who reach U.S. shores are generally allowed to remain in this country, while those intercepted at sea usually go back.

The lighthouse, about seven miles from Sugarloaf Key on a reef in the Florida Straits, should be viewed the same as a bridge, rock jetty or pier, the lawsuit contends. The 21 Cubans who climbed the structure last week when their boat malfunctioned are currently aboard a Coast Guard cutter, their lawyers say.

“By virtue of their entry and arrival on U.S. territory, the American Shoal lighthouse, the 21 refugees have become entitled to certain rights,” the lawsuit says.

“This would entitle each plaintiff due process in the United States.”

No judge has ruled on whether offshore lighthouses constitute U.S. territory. But there is some precedent from 2006, when a group of 15 Cuban migrants landed on a part of the abandoned Seven Mile Bridge in the Keys that is no longer connected to dry land.

U.S. immigration officials determined the bridge section was not U.S. territory and ordered the Cubans returned to the communist island. But U.S. District Judge Federico Moreno later ruled that decision was wrong, and eventually many of the Cubans in that case did return to the U.S.

“The historic bridge, which the state of Florida owns and pioneer Henry Flagler built to develop the tip of Florida, is indeed part of the United States despite its present lack of use,” Moreno wrote in 2006.

Now a different Miami judge must decide if the lighthouse, an iron structure built in 1880, is in the same category, or whether it is more like an ocean-moored buoy that might not be U.S. territory. The lawsuit seeks a decision on an emergency basis, but a hearing has not yet been scheduled.

A former federal prosecutor said the case is anything but clear-cut.

The lawsuit names top Homeland Security, State and Justice department officials as defendants along with U.S. Citizenship and Immigration Services, which handles processing of Cuban migrants once they reach U.S. shores. A call seeking comment from that agency was not immediately returned Wednesday.