Lava flow from Mauna Loa is about 2.5 miles from highway 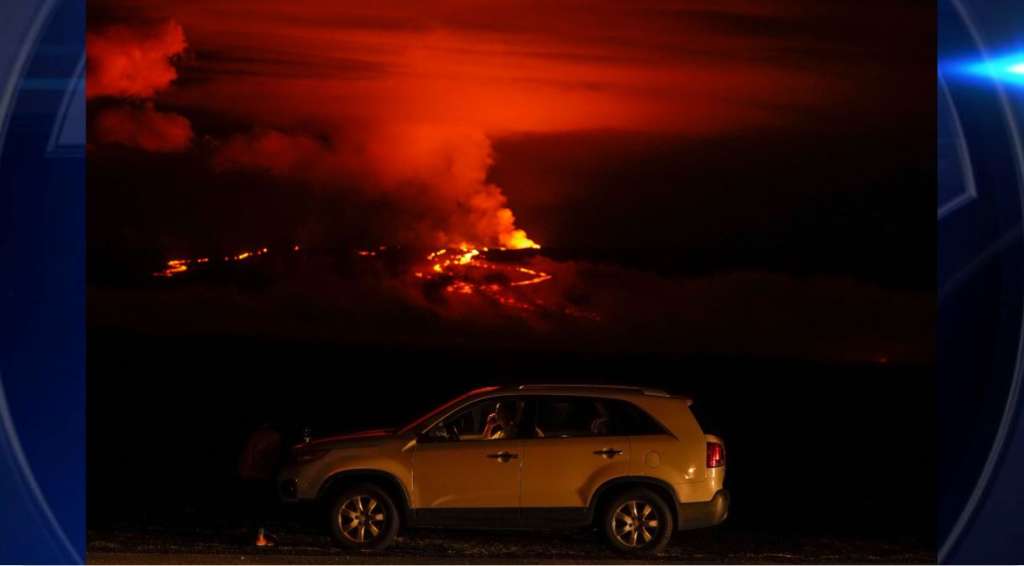 (CNN) — As the world’s largest active volcano oozes molten rock here on the Big Island, a blend of concern and awe has emerged among visitors.

People were pulling over in their cars throughout the night to get a glimpse of the striking scene — a blazing river cutting through the darkened horizon.

They took photos and videos, stood in silence, and even urged others to turn off their car lights for a better, and more reverential, view.

Mauna Loa has been erupting or days, with lava shooting to heights of up to 148 feet on Tuesday.

“We weren’t sure which way it was going to flow, you know which way Pele was going to decide to do it. So this was the best scenario for everybody because nobody’s in danger… So you just have to be thankful,” Deborah Westbrook, who had come to see the volcano during the day, said on Friday.

But, the lava flow from the Mauna Loa is gradually moving closer to the Daniel K. Inouye Highway.

As of Saturday morning, the lava flow had showed little change from a day prior and was about 2.5 miles from the highway, according to an update from the United States Geological Survey.

One active fissure is feeding that lava flow, the USGS added.

The highway remains open in both directions, but the speed limit was reduced to 35 miles per hour in the Mauna Kea Access Road area, according to the HawaiI County Civil Defense Agency.

The one-way route “will provide safe viewing of lava flows,” the agency said Thursday, declaring that parking on the highway was putting motorists at risk of traffic citations and vehicles towed.

Among those gathered early Friday to marvel at the bright orange lava was Ku’ulei Vickery, a native Hawaiian and a teacher at a nearby public school.

She performed a traditional Hawaiian chant and left rosemary grown in her backyard as an offering.

Lava flow is unpredictable but slow

Mauna Loa’s eruption earlier this week for the first time since 1984 has led to concerns related not only to the lava’s impact on the island’s main highway but also health hazards stemming from possible toxic gases being released into the air.

Mauna Loa’s lava was just about 3 miles away from Saddle Road, the fastest route linking the west and east coasts of Big Island, according to the US Geological Survey.

It’s unpredictable in direction and impact. But officials say it’s moving so slowly that they’ll have plenty of time to warn people of any potential danger.

“Advance rates may be highly variable over the coming days and weeks due to the way lava is emplaced on flat ground,” the geological survey said in an update Thursday.

Still, the simultaneous eruptions of Mauna Loa and neighboring volcano Kilauea, which has been erupting for more than a year, could possibly put people at risk of inhaling air that’s been compromised, state health officials have warned.

Residents and visitors can expect “vog conditions, ash in the air, and levels of sulfur dioxide to increase and fluctuate in various areas of the state,” the Hawaii health department said.

Plus, a combination of volcanic gas, fine ash and Pele’s Hair — which are strands of volcanic glass — could be carried downwind, the geological survey said.

And the plumes of dark clouds billowing out of the volcanoes are not smoke — they’re “volcanic gases, which are acid gases. You don’t want to breathe them in,” said volcanologist Jess Phoenix.

“You’re talking hydrogen fluoride, hydrogen sulfide, carbon dioxide. These are all gases that are really not fun for average folks to breathe in, let alone if you have any sort of respiratory issue,” Phoenix said.

In fact, children, the elderly and those with respiratory conditions should reduce outdoor activities that cause heavy breathing and reduce exposure by staying indoors and closing windows and doors if vog conditions develop, the health department said.

While evacuation orders have not been issued, Hawaii Gov. David Ige said he signed an emergency proclamation as a “proactive” measure.

The governor acknowledged Wednesday the potential for air hazards and said officials are tracking air quality monitors across the island.

“The concern is about dangerous gases from the fissures. And the most dangerous is sulfur dioxide,” Ige said. “Observing the volcano should occur at a distance. It’s not safe to get up close.”

It could take at least a week until Mauna Loa’s lava reaches Saddle Road due to significant reduction in the lava’s flow speed.

“Advance of the largest flow slowed over the past 24 hours to a rate of about 0.025 miles per hour,” the geological survey said Thursday. “However, there are many variables at play and both the direction and timing of flow advance are fluid and are expected to change over periods of hours to days.”

The state’s transportation department and local officials have been working on a plan to shut down the highway if the lava gets close enough to become dangerous, said Adam Weintraub, communication director for the Hawaii Emergency Management Agency.

But even with those plans in place, some drivers will still feel the burden of much longer commute.

Emmanuel Carrasco Escalante, a landscape worker, said he would then have to decide between the north side or south side coastal roadways to get from Hilo to Kona.

“It’s a hassle to drive all the way around the island,” he told CNN. “If the road closes, that would add almost two hours, more gas, and more miles so hopefully it (lava) doesn’t cross that road.”

The transportation department shared a preliminary plan for the possibility of closure. The department can provide a six-hour notice of the road’s closure, Weintraub said.

“And the staff at the Hawaiian Volcano Observatory say that they can provide at least 24-48 hours advance warning if the lava appears to be threatening the roadway,” he said.

And if emergencies arise during a possible highway closure, there are hospitals and first responders on each side of the island, Weintraub said.