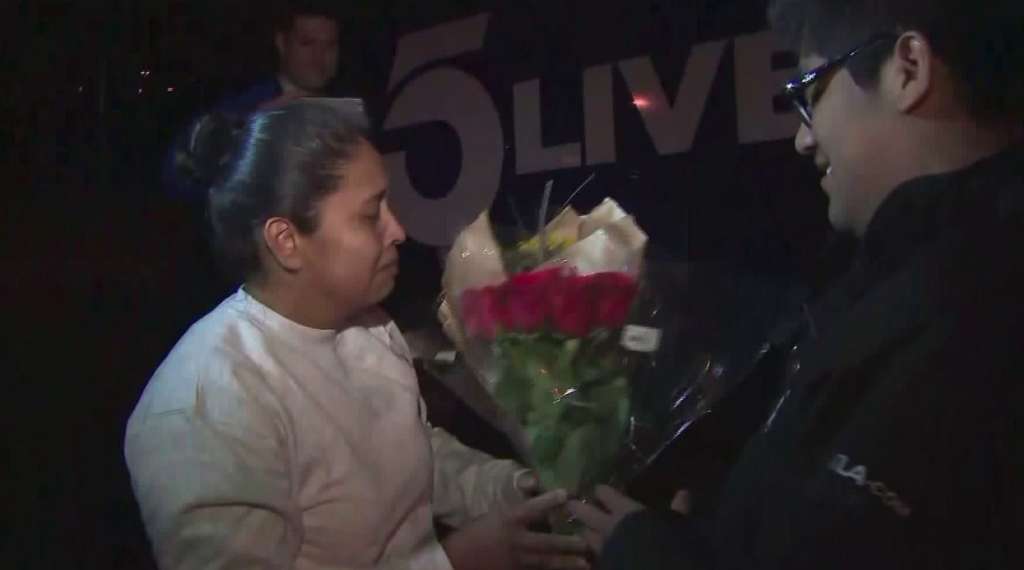 Marcelina Rios is tearful as her son Roberto hands her a bouquet of flowers upon her release from immigration detention in Adelanto on April 12, 2018.

ONTARIO, Calif. (CNN) — A street vendor from California was reunited with her family following six months in immigration detention after a federal judge ordered her release on Thursday, according to the National Day Laborer Organizing Network.

Marcelina Rios was selling corn at Old Town Park in Rancho Cucamonga on Oct. 13 when a San Bernardino County Sheriff’s deputy arrested her.

It was the fourth citation Rios received for lacking paperwork for street vending, Sheriff’s Department spokesman Jacob Bailey told the Inland Valley Daily Bulletin. An activist with the Pomona Economic Opportunity Center said Rios was booked into West Valley Detention Center and released after midnight, only to be taken into custody by two ICE agents, the paper reported.

Rios was later transferred to the Adelento Detention Center, where she awaited her release on Thursday after the 9th U.S. Circuit Court of Appeals issued a stay for her deportation, according to NDLON.

“I never thought that a day selling corn could lead to my being torn from my family and nearly deported,” Rios said in a statement from the advocacy group.

Ben Wood, an immigration rights advocate present for her release, said the judge had determined she was not a flight risk or threat to society.

“It was very clear in (the judge’s) analysis of the case that she was not gonna go anywhere,” he said. “She’s been here for 20 years with her family, and that’s where she needs to be, taking care of them.”

Emi MacLean, a lawyer with NDLON, told KTLA in March that Rios had been living in the same home with her family for 20 years.

Rios has five children who were all U.S. citizens, including a daughter with a disability, according to a fundraising page for her family.

Her son Roberto Rojas was gleeful after being reunited with her Thursday night.

“I love my mom. She’s a very supportive person,” he said. “She supports me through my school career, and I also love her because she’s been raising me since I was little. I just can’t wait to go home with her.”

In the organization’s statement, MacLean said police cooperation with ICE led to excessive consequences for offenses that “often should never have been criminalized in the first place.”

State Sen. Ricardo Lara told NDLON that cases like Rios’ motivated him to author SB 946, which he said would decriminalize sidewalk vending.

The U.S. Court of Appeals for the Ninth Circuit issued a stay of Rios’ deportation, according to NDLON. She has a pending petition for review, the organization said.