‘I won’t leave.’ Residents of hard-hit Louisiana town undeterred by another deadly hurricane 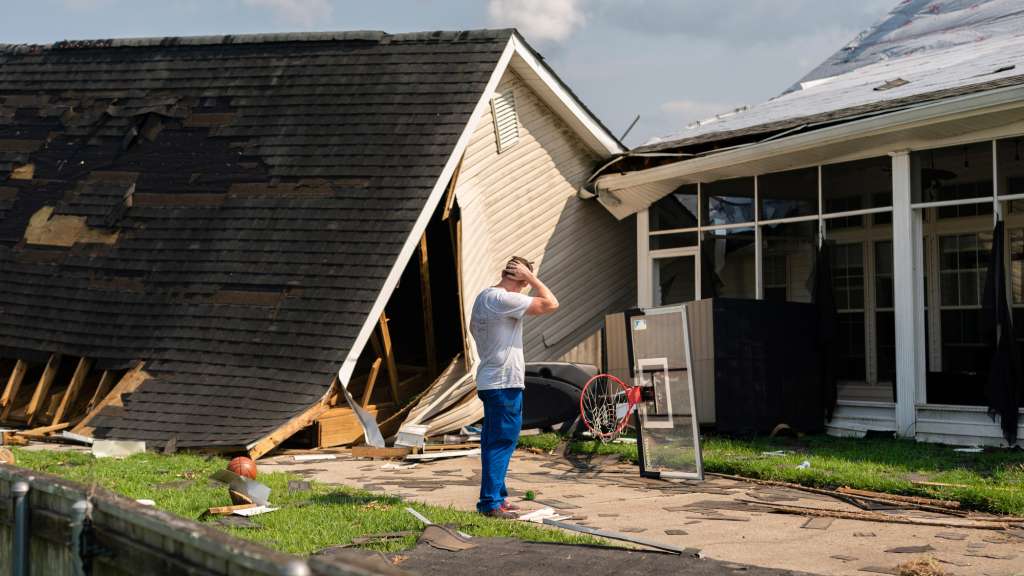 John Lewis is seen at his home on Thursday, September 2, 2021, in Laplace, La. Elijah Nouvelage for CNN

(CNN) — Cheryl Rogers Smith’s favorite chair, where she always looked out over her large brood, sat in front of a huge pile of water-logged belongings discarded on a grassy curbside in the New Orleans suburb of LaPlace.

Relatives hauled the plush white-and-black chair, dressers and other family heirlooms from Smith’s flood-damaged house in the River Forest neighborhood under a searing sun days after Hurricane Ida slammed into the Gulf Coast last Sunday.

Smith, 69, the beloved family matriarch affectionately known as “Mamaw,” died in the hours after the Category 4 hurricane slammed into the Gulf Coast on the 16th anniversary of Hurricane Katrina, relatives said.

Smith, who suffered from diabetes and other health issues, used a rolling walker to get around. She became unresponsive and later stopped breathing after wading through waist-deep flood waters to the two-story home of her neighbor next door, according to family members.

“I’ll miss times with her and gathering here at this house,” said Smith’s eldest daughter, Cassie Falgoust, 51, choking back tears.

“But I have my daddy and my sister,” she added, placing her hand on Mamaw’s chair. “I have my brother, my nieces, my nephews, my great nieces, my kids, my grand babies, my husband, my in-laws.”

In the face of unimaginable pain and loss, Smith’s extended family, like so many other hurricane-hardened residents here, vow to stay in Louisiana. A sense of place coupled with the bonds of family, friendship and community, they said, are stronger than the killer storms that upend their lives.

“Every place has something,” Falgoust said. “You’re not going to be tragedy, disaster free. You’re going to have earthquakes and wildfires. And tornado season. It’s what it is. You just have to pick where you love, where you feel loved and where you feel like family. I’d rather be here and eat really, really good food and be a little chunky and cute than somewhere else.”

Michelle Smith, 48, looked at Falgoust, her sister, as they cleaned their parents’ home: “I won’t leave because she’s here.”

“And I won’t leave because all my kids are here,” said Falgoust, who has four grown children. “She’s here. It’s home. It always will be.”

‘This is the worst’

Ida touched down on August 29 as a Category 4 hurricane near Port Fourchon, Louisiana, south of New Orleans, with winds of 150 miles an hour.

The hurricane led to at least 13 deaths in Louisiana — with remnants of the storm then pummeling the Northeast days later, triggering flash floods and killing dozens more.

In southeast Louisiana, the storm left hundreds of thousands of residents struggling in the unrelenting heat, without electrical power and, in some cases, water — and with limited phone service. Roads were impassable, roofs blown away. People wait for hours in lines outside gas stations and food and water distribution sites.

Mark Jacob, 52, waited on one such line on Airline Highway in LaPlace, where the volunteer Cajun Army distributed water and hot meals the other day at a parking lot under a torturous sun.

His home was heavily damaged, Jacob said, forcing him and his wife to sleep in their pickup, covered with a sheet to protect them against mosquitoes.

“I’ve been through quite a few storms but this is the worst,” he said. “I don’t know if my house is going to be habitable even because I still have a lot of water in my ceiling that may fall.”

By the time Jacob got near the front, the distribution of hot meals had been temporarily halted because the intense heat was unsafe for the volunteers.

“The worst thing right now is people trying to get gas,” said Jacob, adding that a neighbor who had a relative from Georgia deliver gasoline helped him fill his tank.

The president gives a pep talk

With 29,000 residents living between New Orleans and Baton Rouge, LaPlace was among the places hit hardest by Ida.

After Hurricane Katrina slammed into the state in 2005 and became the deadliest and costliest hurricane in the US, New Orleans’ levee and water pump systems were revamped. But the upgrade left communities such as LaPlace, on the west shore of Lake Pontchartrain, more vulnerable to flooding. A levee system offering more protection has not been completed.

LaPlace, in St. John the Baptist Parish, is nestled between the Mississippi River and the lake. A swampy, rural swath of Louisiana, the town is a mix of chemical plants, oil refineries and working class neighborhoods with modest homes.

More than 800 people were rescued in the parish last week, according to parish president Jaclyn Hotard. The parish had 17 inches of rain and 5 feet of storm surge as Ida hovered over it for hours, she said.

“The majority of our businesses and residences have suffered some type of damage… All of our parish is without power right now,” Hotard told CNN Sunday evening.

On Friday, President Joe Biden visited Louisiana to survey the damage, making a stop in LaPlace, where he met with staff at the St. John the Baptist Parish Emergency Operations Center.

“There’s nothing political about this,” he said. “It’s just simply about saving lives and getting people back up and running. … We’re in this together. We’re not going to leave any community behind — rural, city, coastal. And I promise to have your backs until this gets done.”

Small triumphs of family and community

The disaster struck as Louisiana has seen a jump in Covid-19 cases in recent weeks. But, long before the latest surge, St. John the Baptist Parish had for a time last year the highest coronavirus death rate per capita in the country.

The pandemic prompted a debate over whether there was a connection between pollution from the local petrochemical plants and Covid-19. Environmental activists had long ago dubbed St. John the Baptist and neighboring parishes “Cancer Alley.”

“This community is resilient,” said Derron Cook, a teacher and activist who helped distribute aid to residents of his native parish in the days after Ida hit.

“This community always fights and it’s still standing… Our community is definitely experiencing a moment where our humanity has to shine. It has to come through in order to pull through all of these trials. Even the Ida piece, it’s going to take the community together to bring everyone back home and to rebuild.”

Indeed, small triumphs of family and community can be seen from LaPlace to New Orleans, where buses over the weekend shuttled residents without power to shelters in northern Louisiana and Texas.

Residents without electricity sat outside late into the night, attempting to stay cool. Some grilled food on the streets and shared it with neighbors. Others set up charging stations outside their homes, and people gathered around to charge their phones.

And, even as they struggled, residents exhibited that well known New Orleans humor. On one street in the unusually quiet and desolate French Quarter, a fallen utility pole crushed the windshield and top of a red Honda. A sign saying, “Caution. Look up. Power lines overhead,” was left on the shattered windshield. On the driver’s side window, a handwritten sign read: “For Sale. Low mileage, runs great, new tires, full tank of gas. Best offer.”

‘We did this before’

About 30 miles away, on Somerset Street in LaPlace, Willie Bolden, 50, removed water-logged belongings from the house his family has lived in for 21 years.

His wife, Eldora, 48, said the family had added a patio and an outdoor kitchen to the back of their house about three years ago. Now those are mostly destroyed. Her car was flood damaged. So was the LSU medical degree earned by one of their daughters, a resident physician in Jacksonville, Florida, where the Boldens evacuated to last week.

But the couple have no plans to leave Louisiana with their teenage son, even after suffering heavy losses from Hurricane Isaac nine years ago and now Ida. They hope to repair and sell the home, and rebuild in a nearby parish.

Jaimaya Bolden, 25, another daughter, wants them to leave the state.

“Being a young adult, and my sister as well, people ask us, ‘Do you want to have children?’ And leave them where… I’m going to leave my children to this?” she added, looking out at her parent’s storm ravaged home.

‘Some people don’t have a Mamaw’

Further up Somerset Street, Cheryl Rogers Smith’s daughters and other family members cleaned out her home hours before Biden visited LaPlace. There were moldy photo albums with memories spanning decades. Other albums, they said, were lost after Hurricane Isaac. There was Mamaw’s old Victrola record player and album collection, holiday decorations and other keepsakes.

Smith, her husband, Mitch, their five dogs, and three young people who lived in an apartment in the back of the house waded through flood waters to their neighbor’s house the night of the storm, they said. Mamaw was unable to make it up the stairs to the second floor. She sat on a chair in the first floor as water accumulated around her feet. A family friend prayed with her, they said.

Michelle Smith said she was told her mother became unresponsive late Sunday night and stopped breathing about midday on Monday. Attempts to revive her were unsuccessful. Mitch Smith, a Coast Guard veteran, survived and said he will not return to the house.

Smith family members said they believe their parents would have evacuated had the parish issued a mandatory rather than voluntary evacuation order.

Hotard, the parish president, lamented that the storm’s unexpected trajectory and duration of time over the parish prevented an orderly and safe evacuation.

“What put us at such a disadvantage, and really the entire region at a disadvantage, is that this storm initially was going somewhere else not even close to us,” she said. “At the last minute (Ida) turned, came our way and rapidly intensified. There was no opportunity to properly evacuate people.”

Though St. John the Baptist Parish has not officially reported any storm-related deaths, Hotard said, authorities are looking into two deaths — including Smith’s — possibly related to Ida.

“Our thoughts and prayers are with that family,” Hotard said of the Smiths. “Any death, no matter what the reason, is still a loss.”

Relatives remembered Cheryl Rogers Smith as a kind and caring woman who loved gabbing and cooking. The Smith home was always opened to family members and friends. Mamaw devoured episodes of “The Young and the Restless” and “Game of Thrones.”

“Even in her mannerisms and talk sometimes she seemed a little soap opera-esque,” Michelle Smith said. Mamaw was a huge fan of the Alabama Crimson Tide even though most of the family rooted for Louisiana State. And she was a regular on Facebook, which enabled her to keep up with friends and family as her mobility diminished. “She was a Facebook queen,” Falgoust said.

Falgoust fought back tears on Friday as she placed her hand on Mamaw’s favorite chair outside the single-story house.