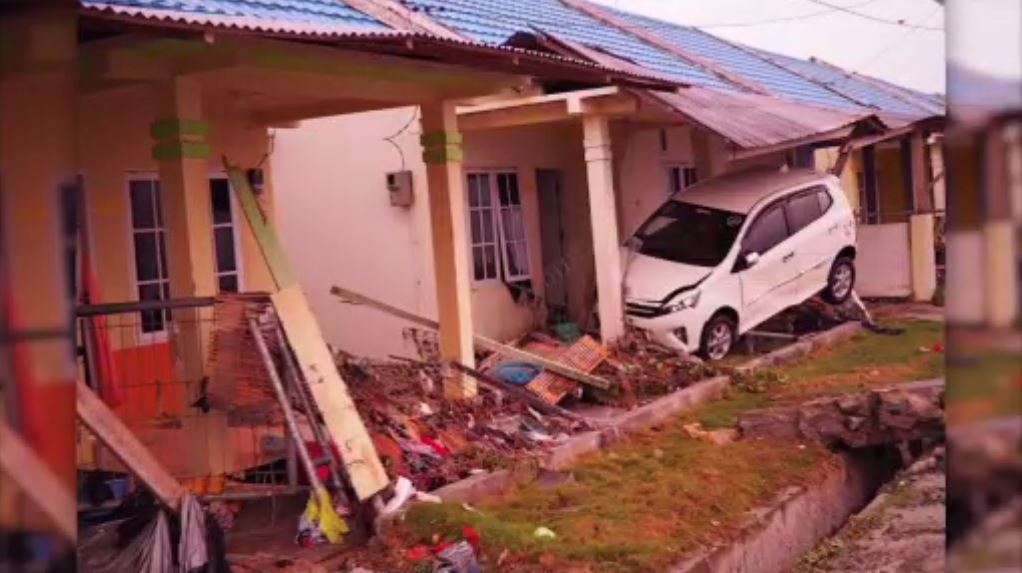 PALU, Indonesia (AP) — For some who survived the massive earthquake and tsunami on Indonesia’s Sulawesi island last week, the memories and the horror of experiencing a disaster that has left more than 1,400 people dead are both hard to erase and understand.

Furniture maker Khairul Hassan recalled working at a shop near the beach in front of a row of warehouses when the ground came alive and shook violently. He ran to a nearby hill and watched as the ocean heaved up and hurled forward. Now he can’t forget.

“I saw the waves come and sweep out everything — buildings, factories, warehouses and some people who were lost, racing from the waves, some of them women and children,” he said Wednesday. “Also, warehouse workers who were trapped under goods, all swept by the sea. It’s so tragic. It’s so scary to remember.”

Five days later, aid was slowly creeping into areas where victims have become increasingly desperate after being left without food, water, fuel and medicine. In one neighborhood in the city of Palu, residents celebrated as they swarmed a truck delivering aid — clapping, cheering and high-fiving.

“I’m so happy,” said Heruwanto, 63, who goes by one name. He was clutching a box of instant noodles. “I really haven’t eaten for three days.”

The official death toll increased to 1,407 on Wednesday, with thousands injured and more than 70,000 displaced from their homes, said national disaster agency spokesman Sutopo Purwo Nugroho. He said the number of dead would increase, but that rescue crews had reached all affected areas.

The U.N. humanitarian office estimated that some 200,000 people need assistance in the disaster zone and announced a $15 million allocation to bolster relief efforts. Help has been slow to reach many victims, especially those living in areas cut off by impassable roads. But large fuel and food conveys, guarded by security forces, have been making their way in.

Miles (kilometers) of coastline spreading out from Palu are a surreal landscape of debris, beached boats, upturned cars and the foundations of obliterated houses.

All that remained of many beachside homes was their foundations. Wrecked houses still standing were spray painted with appeals for aid. On the wall of one dwelling, “Help us Mr. President” was scrawled in big lettering.

The town of Donggala to the northwest of Palu was relatively unscathed. A few houses had collapsed and a couple of large boats were beached. Residents were relaxed and smiling in contrast to the anguish and tension evident across Palu.

In addition to the quake and tsunami, Indonesia also demonstrated Wednesday what it means to sit on the Pacific “Ring of Fire” when a volcano erupted in another part of Sulawesi island about 940 kilometers (585 miles) northeast of the earthquake zone. It sent a plume of ash more than 6,000 meters (20,680 feet) into the sky. Planes were warned of the cloud billowing from Mount Soputan because the ash can be hazardous for aircraft engines, but no evacuations were ordered in the area.

Experts said it’s possible the quake accelerated the eruption, but there is no concrete evidence to prove that. Activity at the volcano had been increasing since August and began surging on Monday, Kasbani, who heads Indonesia’s Volcanology and Geology Disaster Mitigation Agency and uses one name, told an online news portal.

“We are going in phases. There are lots of things happening related to evacuation, as aid and fuel are also coming in,” he said, noting that 30 people remain buried under rubble at the Roa Roa Hotel in Palu.

Some homeless residents weren’t waiting for help. Dozens sifted through what remained of the flattened complex of warehouses along Palu’s ravaged coastline, looking for anything they could salvage to eat, sell or help them rebuild. They carted away corrugated metal, wood, piping and other items.

Others pulled out small cartons of milk, soft drinks, rice, sweets and painkillers. They were young and old, middle class and poor, university students and sullen young men.

“We have to do this because there’s no assistance from the government,” said Zaitun Rajamangili, 41, adding that his home was swept away but his family survived.

Following widespread looting and aid vehicles being stopped and surrounded by people on roads, Indonesian military chief Hadi Tjahyanto said one soldier and one police officer would be placed on every aid truck and soldiers would be sent to secure markets, the airport and fuel depots to maintain order. He added that a Singaporean military transport plane will help evacuate victims from the airport in Palu. In addition, aircraft from South Korea, the United Kingdom and Japan were expected to ferry aid.

Australia announced it will send 50 medical professionals as part of a $3.6 million aid package.

The U.N. said the Indonesian Ministry of Social Affairs has asked the U.N. children’s agency, UNICEF, to send social workers to support vulnerable children who are alone or became separated from their families. It said the World Health Organization is warning that a lack of shelter and damaged water sanitation facilities could lead to outbreaks of communicable diseases.

Indonesia, a vast archipelago of 260 million people, is frequently struck by earthquakes, volcanic eruptions and tsunamis because of its location on the “Ring of Fire,” an arc of volcanoes and fault lines in the Pacific Basin. A powerful quake on the island of Lombok killed 505 people in August.