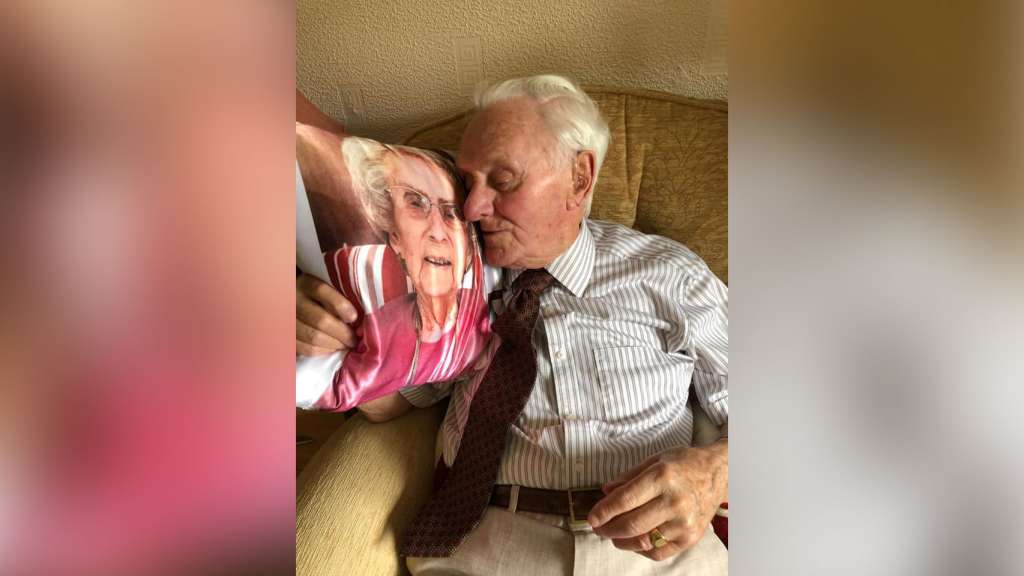 (CNN) — Ken Benbow was surprised when he was given a pillow with his late wife’s face on it. He clutched the gift, and a brief smile gave way to tears.

An observant care worker, Kia Mariah Tobin, gave Benbow the pillow on Saturday after she noticed he took a photo of his wife Ada to bed with him each night.

Benbow and Ada were married for 71 years before she passed away last August, a staff member at the Thistleton Lodge told CNN. The staff cares for 94-year-old Benbow at the care home in Preston, United Kingdom, which is about an hour northwest of Manchester.

“We know our residents are missing their loved ones at this time but let’s not forget those who sadly aren’t here with us anymore,” the care home posted on Facebook. “Safe to say we all shed a tear with Ken today.”

The tender moment was captured on video as Tobin came into Benbow’s room bearing the heartfelt surprise.

“I’ve got you a present,” Tobin said in the video.

“What’s that darling?” the 94-year-old asked a moment before he was given the pillow.

A wave of emotion washed over Benbow’s face. He covered his teary eyes with the pillow and Tobin came over to hug him.

“Oh Ken, how beautiful,” a man said off-camera after Benbow showed him the gift.

Sitting back in his beige armchair, the widower held the pillow in his arms.

“I thought that might be a bit better than your photograph,” the care worker said, holding his hand.

The staff also cared for Ada at the home. She was 93 when she passed away, the staff told CNN.

Benbow has plenty of stories of his days in the Royal Navy and how he served in World War II, the staff said. Notably, Benbow was at Normandy on D-Day in June 1944.

Benbow, who has become quite the popular guest on British news outlets, had gone to bed for the day when CNN called on Tuesday evening.