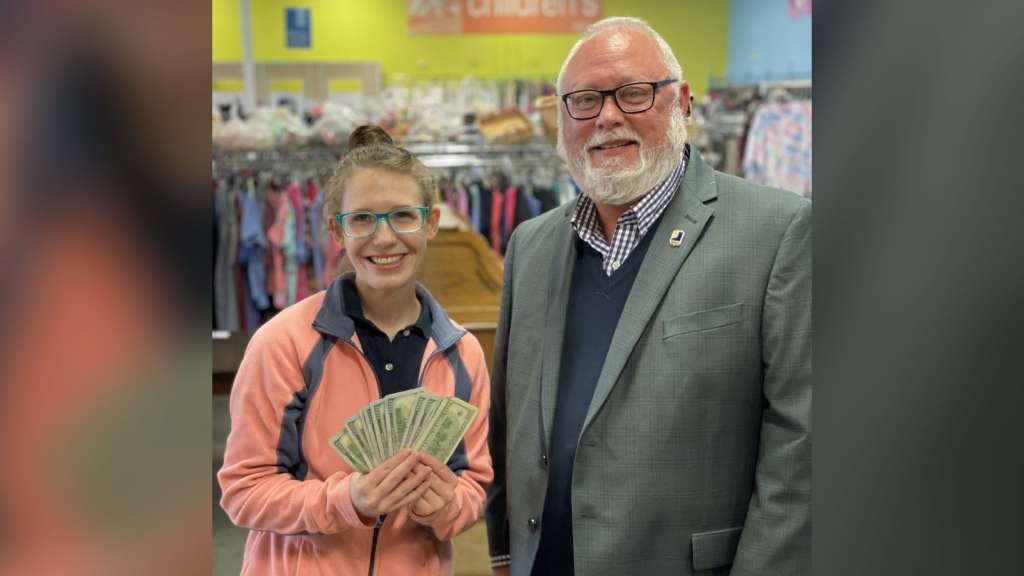 Frank Holland, the Goodwill VP of Donated Goods, presented Andrea Lessing (left) with a cash reward after she found a massive sum of cash in a donation. (Photo: Goodwill Industries of Central Oklahoma)
CNN

(CNN) — Andrea Lessing had seen a lot of unique donations in her time as an Oklahoma Goodwill employee, but none nearly as valuable as $42,000 in cash.

Lessing had been sorting through a pile of donations at the Norman Goodwill location when she felt something odd between two sweaters. As she unwrapped the sweaters, she found that what she suspected to be books were in fact stacks of cash.

“My first thought was that it was fake. We’ve seen $5 and $20 donated here and there, but never in my life had I seen that much money,” Lessing said in an interview.

Lessing didn’t think twice about whether or not to report the money, and with the help of some documentation of the donation, Goodwill was able to track down the money’s owner. Lessing has a 6-year-old daughter, and she said it was important for her daughter to see the importance of honesty.

“With every decision I make, I have to think about whether I would want my daughter to follow in my footsteps,” Lessing said. “I want her to know that kindness, integrity, and honesty can get you a lot of places in life.”

Her good deed was rewarded: The owner of the lost cash instructed Goodwill to give Lessing $1,000 of the money. Lessing said the owner’s generosity “lifted a huge burden” off her shoulders.

“Because of everything that’s been going on within the past year and a half, it just meant more than anyone could imagine,” Lessing said. “I didn’t return the money expecting a reward or expecting to be on the news, I just believe if you do something good, it will come back to you eventually. And it did.”

Goodwill was also impressed with Lessing’s integrity, saying it is one of the values they seek to uphold as a company.

According to a Goodwill representative, the cash find is the largest amount found in any donation at an Oklahoma Goodwill in its 85-year history and is one of the largest cash finds at any Goodwill location internationally.