From wildfires to tropical storm rains, parts of the West Coast continue to face extreme weather conditions this weekend 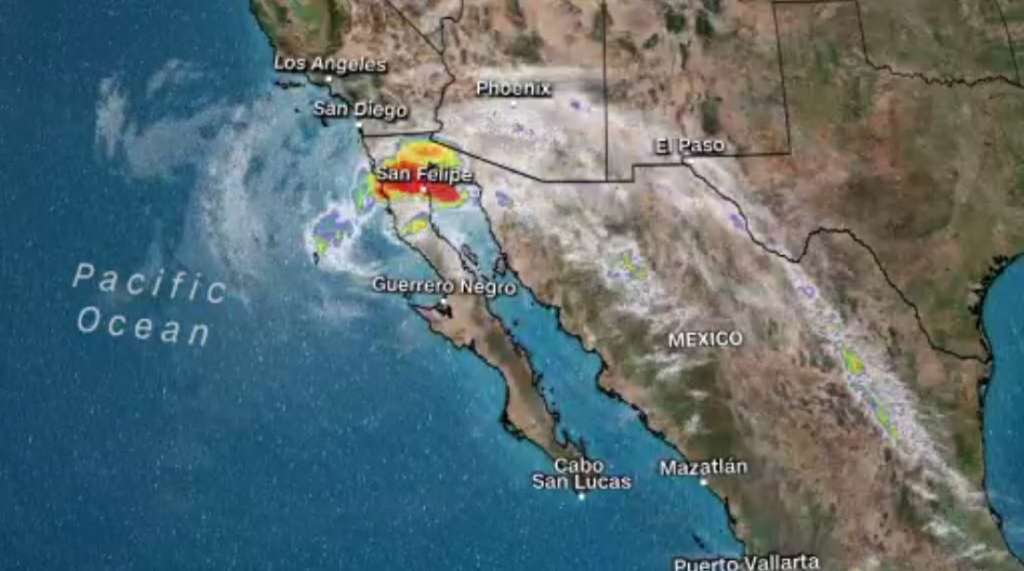 (CNN) — As parts of the West grapple with destructive wildfires fueled by scorching temperatures, a storm that brought life-threatening flash flooding and powerful winds to Southern California on Friday will deliver more heavy rain over the weekend.

At least 5 million residents across California, Nevada and Arizona remain under flood watches through Saturday morning as post-tropical cyclone Kay drenches the coastline and further inland. An additional half inch of rain is forecast for the region Saturday.

San Diego County saw some of the heaviest rain totals Friday, with 5.08 inches on Mount Laguna and 4.61 inches in Ranchita, according to preliminary data from the National Weather Service. The city received 0.61 inches of rain Friday, shattering its previous daily rainfall record of 0.09 inches set in 1976. The storm also caused some damage and flooded roads, officials said.

Kay will “continue to bring heavy rain and flash flooding to portions of the Desert Southwest into Southern California” through Saturday, the National Weather Service said.

Kay has weakened from its earlier tropical storm strength when it struck the US, which had followed its landfall in Mexico as a Category 1 hurricane on Thursday. It will continue to weaken as it moves west off the northern Baja coast, roughly 120 miles southwest of San Diego, according to CNN meteorologist Derek Van Dam.

The downgraded storm system still has measured sustained winds of 40 mph, which had worried fire officials as the erratic Fairview Fire raged in Southern California. The fire has charred more than 28,000 acres since it started September 5, according to Cal Fire on Friday evening.

At 40% containment, the fire has killed two civilians and injured another, according to officials. The blaze has also destroyed 13 buildings, including homes, and damaged four others. It threatens an additional 10,000 structures.

But there is some relief in store, officials said, as rainfall moves through.

“With the onset of the rain, the drought-stricken area has not only received much-needed precipitation, but has also aided firefighters by slowing the spread of the Fairview Fire,” Cal Fire said Friday.

Forecasts show the heatwave that has been baking millions in the West for more than a week and required residents to limit their electricity use is set to diminish this weekend.

“The record heat that has plagued large portions of the West over the past week is coming to an end,” the weather service added. “Friday will likely be the last day of record heat through the interior Valleys of California with temperatures this weekend falling to levels closer to average.”

It has been so hot throughout the region that some effects of anticipated rainfall were lessened even further, officials said.

“Because it has been so hot, we’re seeing some evaporation of rain before it hits the ground. This is also helping some of the gusty winds we are seeing as well,” weather officials in Los Angeles said.

While some residents in the region will see a respite from the heat this weekend, others in the Pacific Northwest are forecast to experience an elevated risk for dangerous fire activity, the weather service warned.

Farther north from the California coastline, this weekend’s warm temperatures paired with dry conditions may continue to threaten power outages in Oregon.

One power provider shut off electricity for 30,000 homes and businesses in Portland and Salem, Oregon, Friday to help reduce the risk of fire activity that could become dangerous.

The practice known as public safety shutoff is usually conducted in a limited area considered to be high risk of wildfire, Portland General Electric said. Other areas will also see outages due to “the imminent high winds, the extreme fire conditions currently found in Oregon,” the utility provider said.

Another 7,235 homes and businesses also experienced outages due to the hazardous fire weather conditions, according to provider Pacific Power.

“Over the course of the past two weeks, I’ve declared three fire conflagrations, as well as a statewide fire emergency to quickly marshal all available and necessary resources as wildfires arise,” Oregon Gov. Kate Brown said. “With seven active large fires in Oregon right now, more than 168,000 acres are burning across our state.”

A red flag warning — an alert for enhanced risk for fire activity due to weather conditions — is in effect for northwest Oregon and southwest Washington state through Saturday.

Wind gusts in those areas may range from 25 to 50 mph, potentially aiding the rapid spread of fires

Meanwhile, many parts of California will not be affected by the rains of Kay and remain at higher risk for extreme conditions.

The explosive Mosquito Fire in Northern California’s El Dorado and Placer counties has charred nearly 30,000 acres and remained 0% contained late Friday, according to Cal Fire. Evacuations have been ordered and warnings have been issued for about a dozen communities.

“The fire spread significantly overnight due to extreme fire behavior and heavy smoke limited visibility. The fire made uphill runs with short-range spotting. Weather will be minimal winds and 21% relative humidity,” Cal Fire officials said in an update.