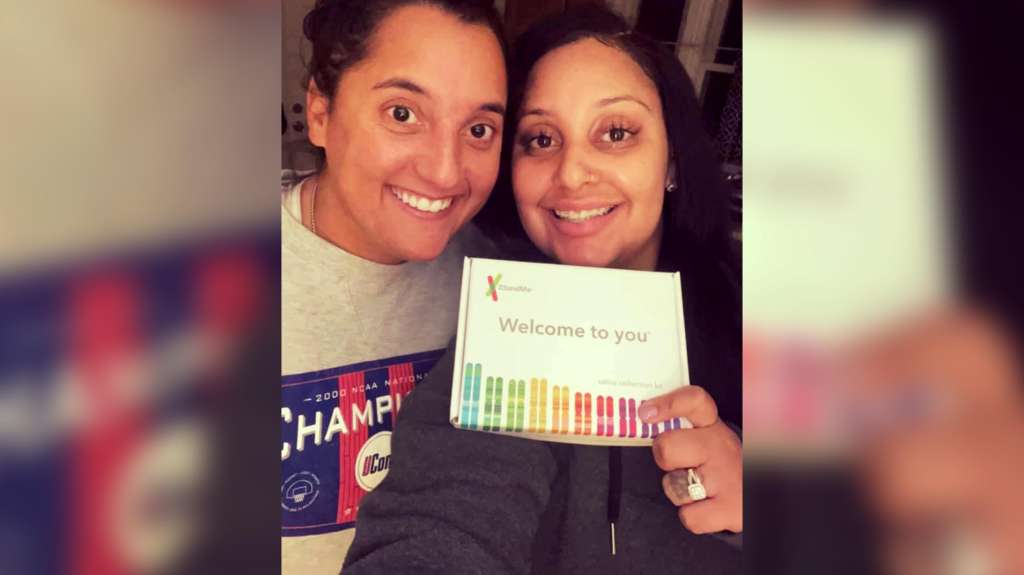 Cassandra Madison, 32, and Julia Tinetti, 31, began telling people they were sisters not long after they met in 2013 while working at The Russian Lady restaurant in New Haven, Connecticut, but a recent DNA test confirmed that they are actually biological sisters.

The two women had a lot in common — they were both adopted from the Dominican Republic as babies, they looked enough alike that customers and coworkers mixed them up all the time and they each had Dominican flag tattoos.

The tattoos got them talking and they became fast friends.

“We hit it off right away. There was no trying to force a friendship or anything,” Madison told CNN. “Our personalities are very similar, so it was very easy for us to just start hanging out.”

They really leaned in to the sisterhood gag and would sometimes wear matching clothes to work.

“We had an event that we went to that we dressed alike — our socks matched, our sneakers matched, our sunglasses matched our shorts were black — she made us tank tops that said that she was the big sister and I was the little sister,” Tinetti said. “We kind of just went with it like as a joke. It was not serious at all.”

At one point, they looked through their adoption paperwork to see if they might really be sisters, but the forms said they had different mothers who lived hours away from each other.

“So we said, ‘Okay, never mind, forget it, then we’re not,’ and we just moved on with our lives,” Madison said. “But we still played into us being sisters even though we knew that we weren’t. Well, we thought we weren’t.”

Madison moved to Virginia Beach, Virginia, in 2015 and the pair mostly only kept in touch over Facebook.

Madison had grown up knowing that her biological parents had given her up for adoption because they couldn’t afford to care for her.

She always wanted to meet them and, in 2018, her adoptive mom gave her a DNA test kit for Christmas.

Seven siblings in the Dominican Republic

Madison thought she’d just learn more about where her ancestors came from, but it also turned up a cousin, who also lived in Connecticut and knew her dad.

Her biological mom died in 2015, but Madison has been to the Dominican Republic to meet her dad and family members. They welcomed her at the airport wearing shirts with her picture on them.

There were seven other children in the family.

Madison and Tinetti reconnected last year and realized that something seemed off about their paperwork.

Tinetti’s best friend, Molly, was adopted from the Dominican Republic on the same day and their moms stayed in touch over the years. Molly’s adoption papers said that she and Madison had the same mothers, but her DNA results showed that they were distant cousins.

Madison talked to her father about it and he told her that they had given another daughter up for adoption.

“And I’m like, ‘Why would you not tell me this?’ And he’s just like ‘I’m sorry. It was just a very difficult time in our lives and your mom and I, we don’t like to talk about it,'” Madison said.

Madison drove from Virginia to Connecticut to get Tinetti to take a DNA test.

Tinetti agreed to take the test even though she had never had any interest in learning about her biological family.

“I had a great family growing up, I got a good education, I didn’t feel like I was missing anything in my life,” Tinetti said. “I was happy with the life that I had. I didn’t feel the need to do it.”

Tinetti got the test results back in late January.

“I was like, ‘This is it,’ and I waited for probably like 10 minutes before I even opened it, because I was trying to prepare myself for what was going to be there,” Tinetti said.

Both women said they’d tried not to get their hopes up, but they knew they would have been devastated if they had not turned out to be biological sisters.

Madison said she talks to her dad and siblings every day and that she and Tinetti have picked up right where they left off.

Tinetti said she’s had video chats with her biological father and her siblings and hopes to go to the Dominican Republic to meet them in person.

She said it was “quite shocking” to see them because they look so much alike.

“It was like seeing myself in these people,” she said. “It’s like, ‘Okay, well, now I know where I come from,’ you know what I mean? It has always been a mystery for me.”