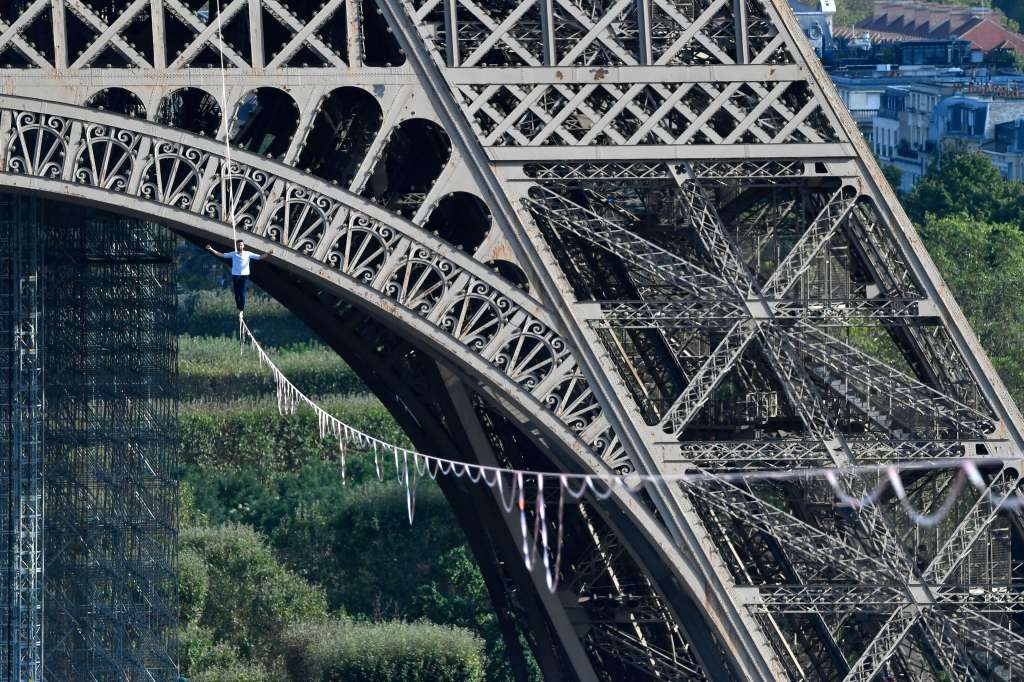 Nathan Paulin performs on a 70-meter-high slackline between the Eiffel Tower and the Chaillot Theater on September 18. (Photo by Alain Jocard/AFP via Getty Images)

(CNN) — Crowds lining the banks of the Seine and visiting the Eiffel Tower in Paris this weekend were treated to an unusual sight — a slackliner charting an unusual path across the skies above their heads.

Frenchman Nathan Paulin walked the 600-meter slackline from the Eiffel Tower to the Chaillot Theater on the other side of the Seine, in a trip that took the 27-year-old just half an hour.

However, this is not the first time Paulin has attempted this feat — he previously walked a similar route from the Eiffel Tower in December 2017, for a televised charity fundraiser.

When he first did it, it set the world record for the longest urban highline walk with a safety harness by a man — a record that remains unbroken today.

At some points sitting down and lying on the slackline during Saturday’s performance, Paulin’s performance drew rapturous applause from crowds watching below and from the Eiffel Tower.

This year’s initiative was organized with the help of French dancer and choreographer Rachid Ouramdane and organized by the Chaillot Theater, with performances taking place on both Saturday and Sunday afternoon.

Slacklining is similar to tightrope walking but involves a wire that has not been stretched taut, but rather moves with the user. Paulin’s slackline was suspended 70 meters above ground, according to news agency Reuters.

Paulin’s feat formed part of the celebrations in Paris for European Heritage Days and the launch of the Cultural Olympiad, which also included a number of other performances by French artists.

According to his website, Paulin holds several world records and his longest walk so far is a 1662-meter highline suspended at a height of 300 meters at Cirque de Navacelles, a landform in the Massif Central mountain range in southern France.

Paulin began slacklining in 2011 and says it helped him find a “true inner peace” through the combination of intense concentration and mastery over his body.