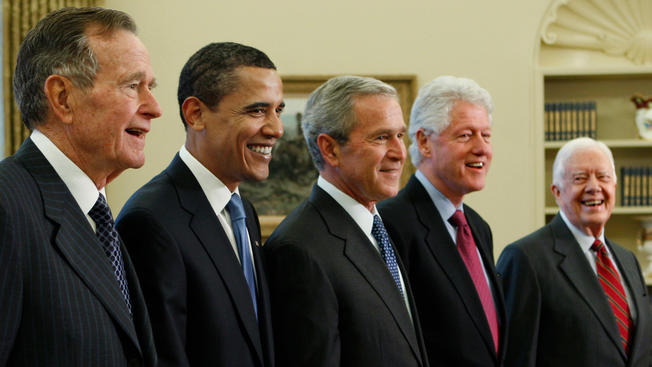 (WSVN) - All five living former presidents are joining forces on a fundraising campaign to help with hurricane recovery for the U.S., Puerto Rico, and U.S. Virgin Islands.

Organizers say a special restricted account has been established through the George H.W. Bush Presidential Library Foundation to collect and quickly distribute donations. Officials say “100 cents out of every dollar” donated will help hurricane victims.

The website, OneAmericaAppeal.org, was first launched after Hurricane Harvey devastated Texas and the Gulf. It then was expanded to include Florida following Hurricane Irma.

“Hurricanes Harvey and Irma have brought terrible devastation – but also brought out the best in humanity,” the website states. “As former Presidents, we wanted to come together to help our fellow citizens in Texas and Florida as they recover and rebuild.”

Now they have further grown the campaign in the wake of Hurricane Maria, which devastated the already hard-hit areas of Puerto Rico and the U.S. Virgin Islands, which were hit by both Irma and Maria.

“Now individuals, foundations and institutions making tax deductible donations at OneAmericaAppeal.org may choose to assist all three recovery efforts from Hurricanes Harvey in Texas, Irma in Florida and Maria in Puerto Rico and the U.S. Virgin Islands — or to direct their donation to a specific recovery effort — using the drop-down menu in the website’s donation section,” the campaign said in a press release.